Sarah Jessica Parker at the Met gala...omg that hat!

The Met gala is a very fascinating gala. An overwhelming amount of very famous celebrities wearing the most amazing (and outrageous) clothes. And that’s all it is, a sort of ''out of this world'' fashion show.

The celebrities that get invited, usually by the fashion companies with the wherewithal to buy seats, are nothing more...and they know it...than ornamentation. It’s not about their work as an artist and there is nothing that they want to communicate other maybe than being on Anna Wintour's (Vogue America's editor in chief) hot list for that year. 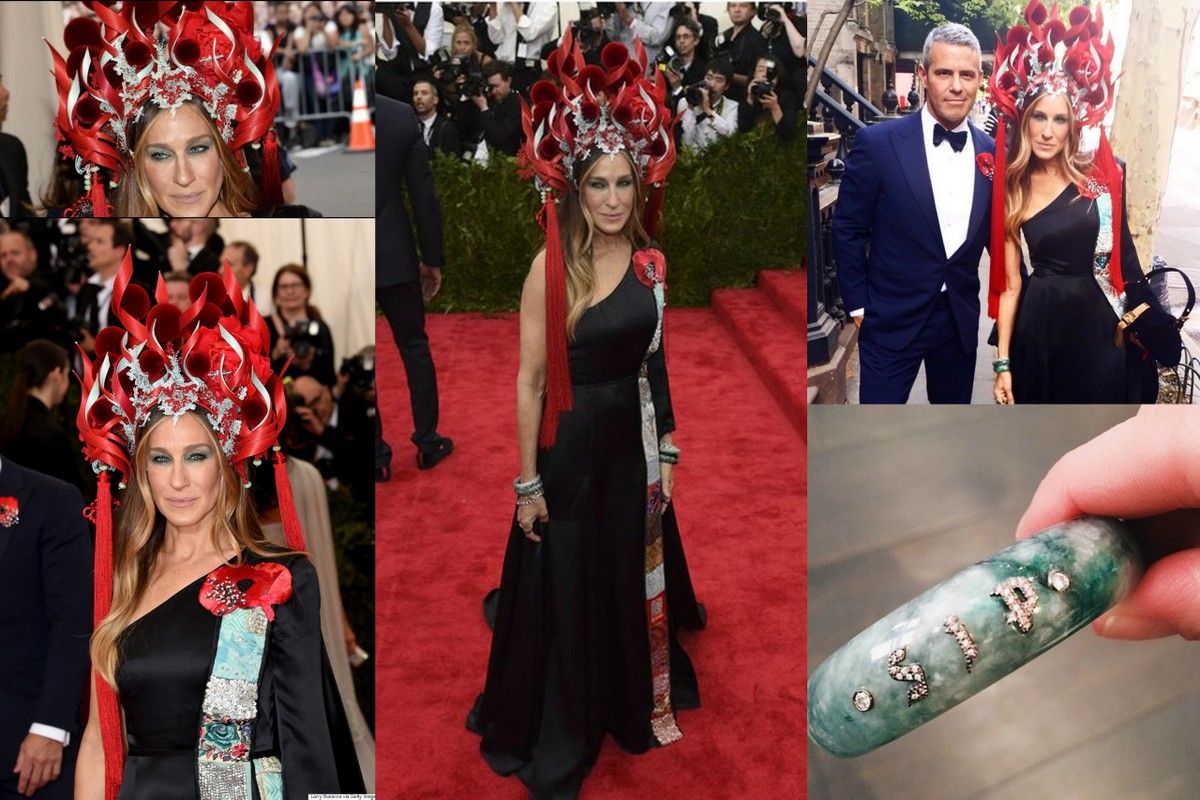 Sarah Jessica Parker and her dress from H&M, hat by Philip Tracy and jewelry by Jennifer Fisher

The point of the Met gala

The whole point of the gala is to raise money for the Costume Institute annual fashion exhibit. The gala opens the season and the exhibition which has a new theme every year. The exhibit itself runs for several months. Hosted by Anna Wintour of Vogue, the Met Gala is celebrating its 69th birthday. Mrs Wintour is responsible for overseeing the benefit committee and the guest list. 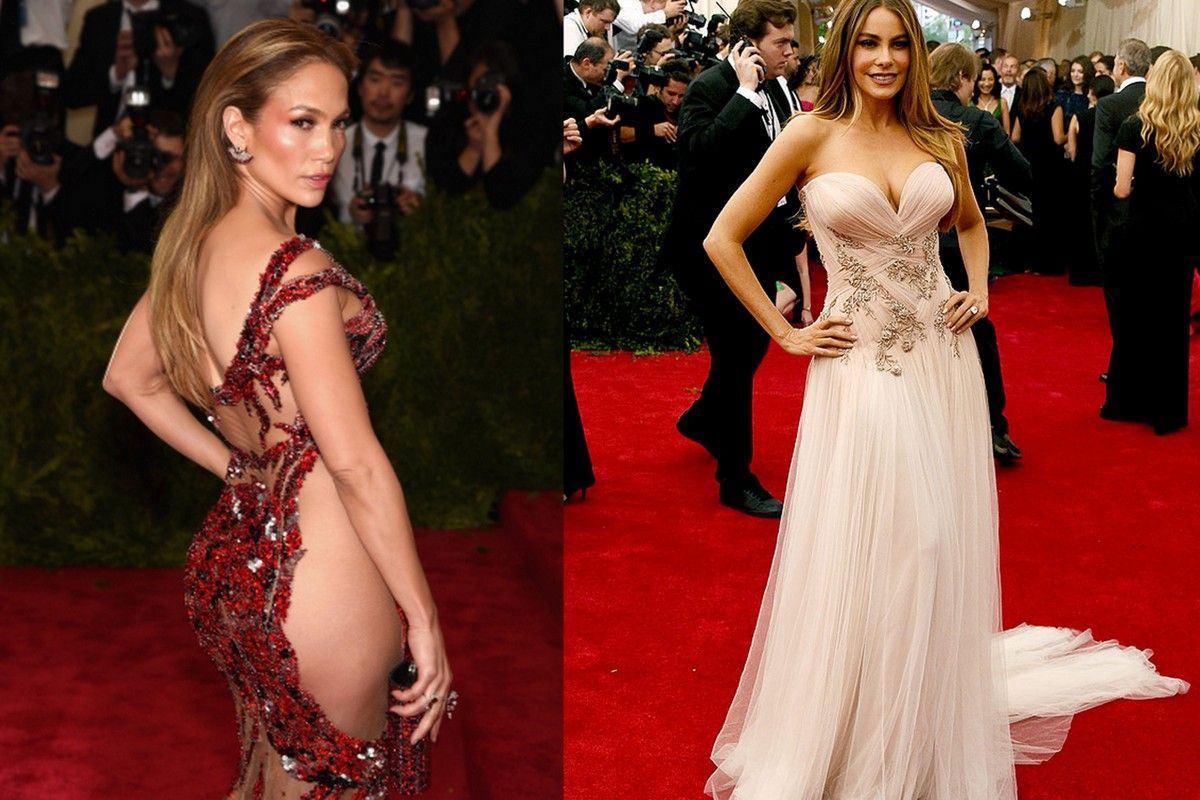 Two stunning ladies, well into their forties...Jennifer Lopez and Sofia Vergara, from my absolute favorite show ever: Modern Family

According to Cathy Horyn of The New York Times, the gathering rivals the Vanity Fair Oscar Party, which has more star power, but less fashion panache. In 2014 the individual tickets were raised from $10.000 to $25.000 to increase the exclusivity of the event, which includes only 650-700 people. 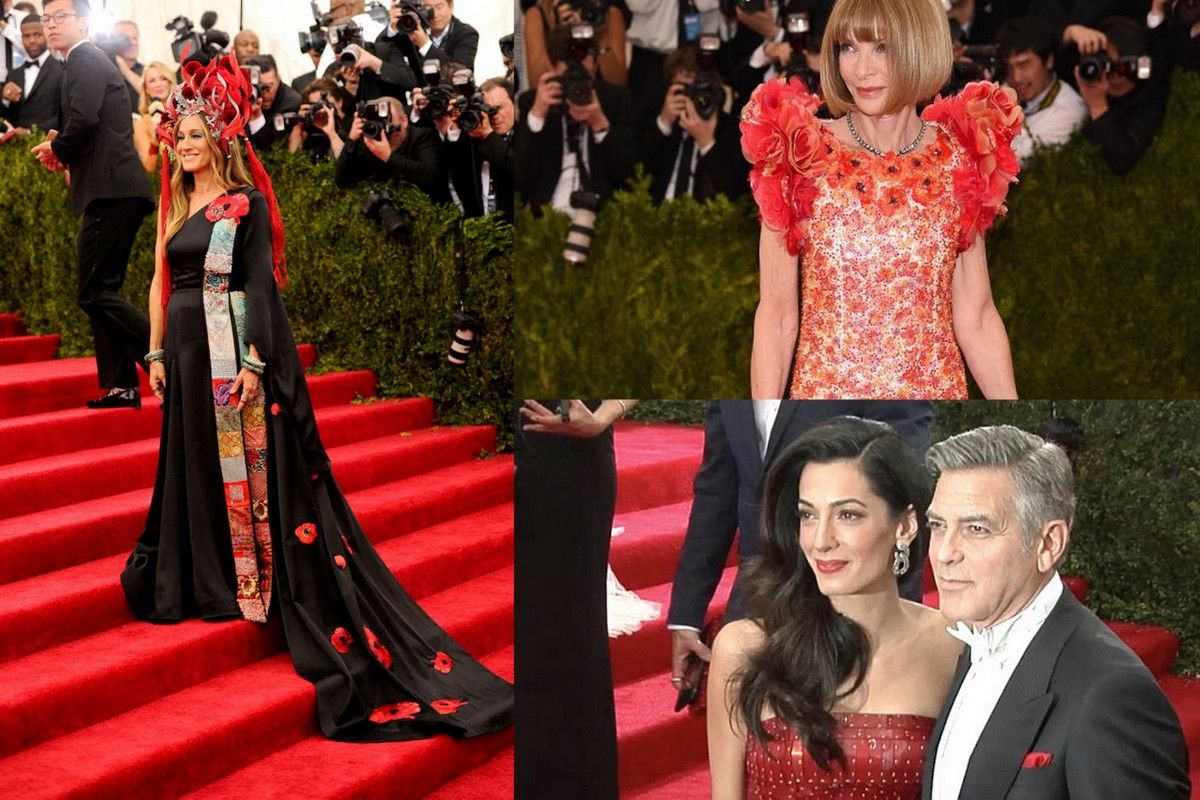 Whatever your opinion about the outfit, it does take a lot of courage to wear an outfit like this...:-) On the right side, the powerful Anna Wintour from Vogue U.S.A. and another power couple: Amal & George Clooney

We were not amongst them, but rumour has it that being chosen by Anna Wintour is something of an achievement in itself, still the gala is not famous for being a fun thing to do. It seems that Gwyneth Paltrow attended once and swore never to do it again as it was incredibly boring and without meaning. To me personally it seems like work. Something one would do for work. One of the downsides though of work. But that’s just me, I am no party queen! 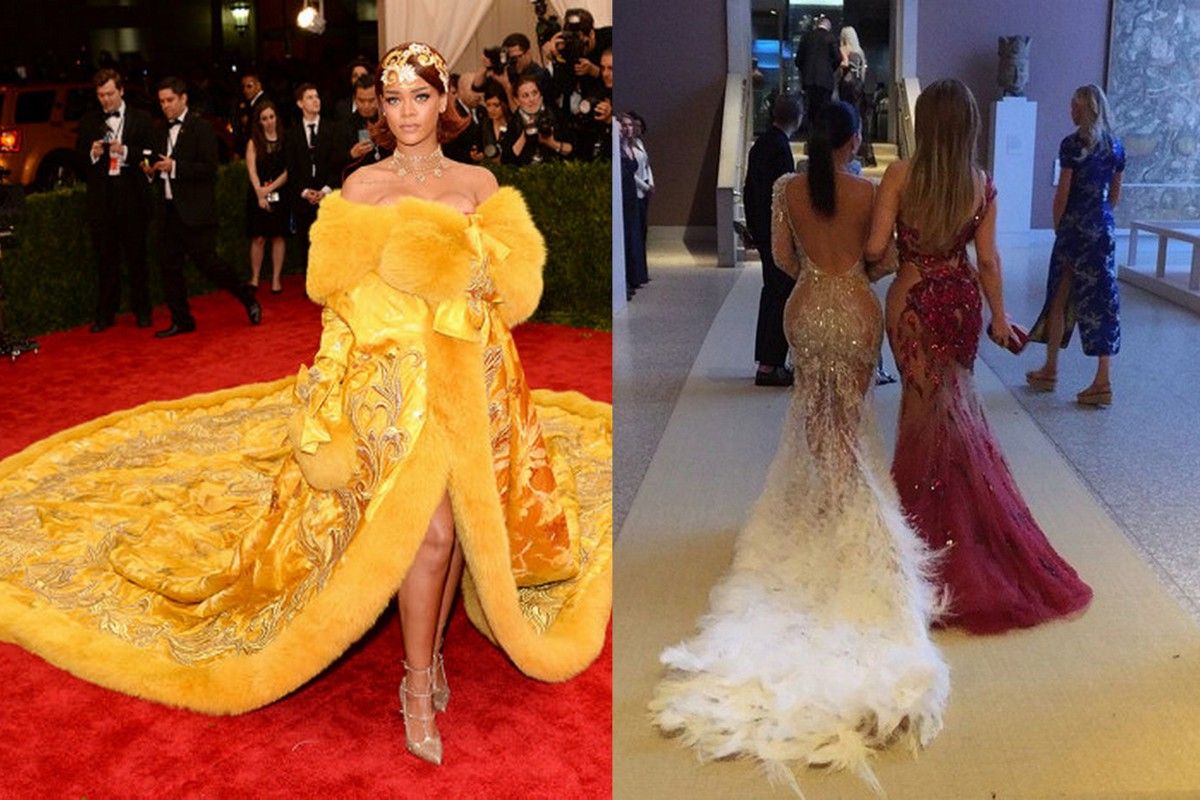 Rihanna had a very yellow and very enormous kind of cape...but  wore it ever so beautiful...Kim Kardeshian and  Jennifer Lopez with dresses that are giving away their curves....

We could talk about the almost see through dresses of many stunning women. But let’s talk about Sarah Jessica Parker instead. You might either loved or hated her outfit. I actually liked the idea behind the dress. It was made in cooperation with H&M. An almost unlikely name in a out of this world parade of glitz and glam and superficiality. H&M has developed a sustainable line of clothing called the Concious Collection. 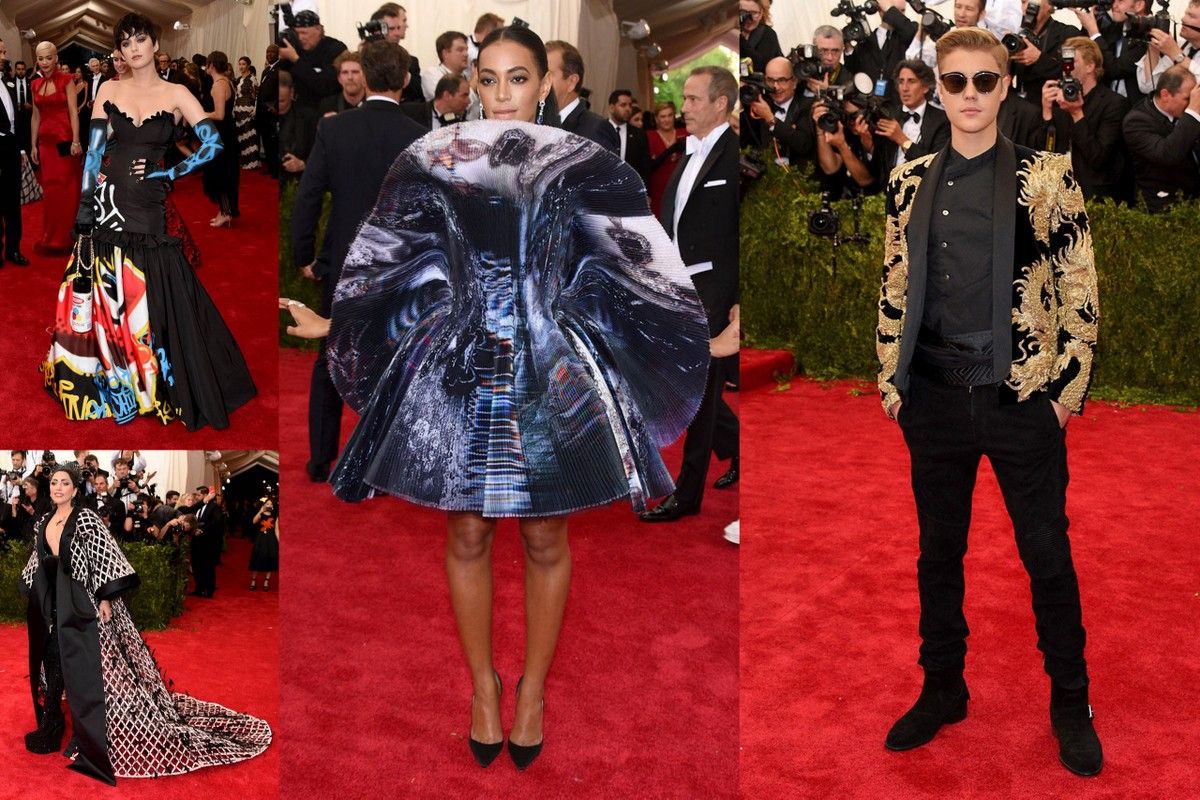 The theme was China, through the looking glass….and I am not sure what the head expressed in this case. It was a magnificent hat that no one will ever wear again probably, made by Philip Tracy.

I am never sure why Sarah Jessica Parker is still invited on occassions like this. Not to be mean, but Sex and the City was fun, but now kind of outdated. And she was in some films after that but nothing huge. I get the feeling that she has developed her character of Carrie Bradshaw from SATC in real life to a more lucrative concept. She was being quite the fashionista in that series and she has treasured that image, very cleverly, by developing shoes and other items related to fashion. Her latest collaboration is with shoe giant Zappos and it seems that it is a very profitable collaboration for both. 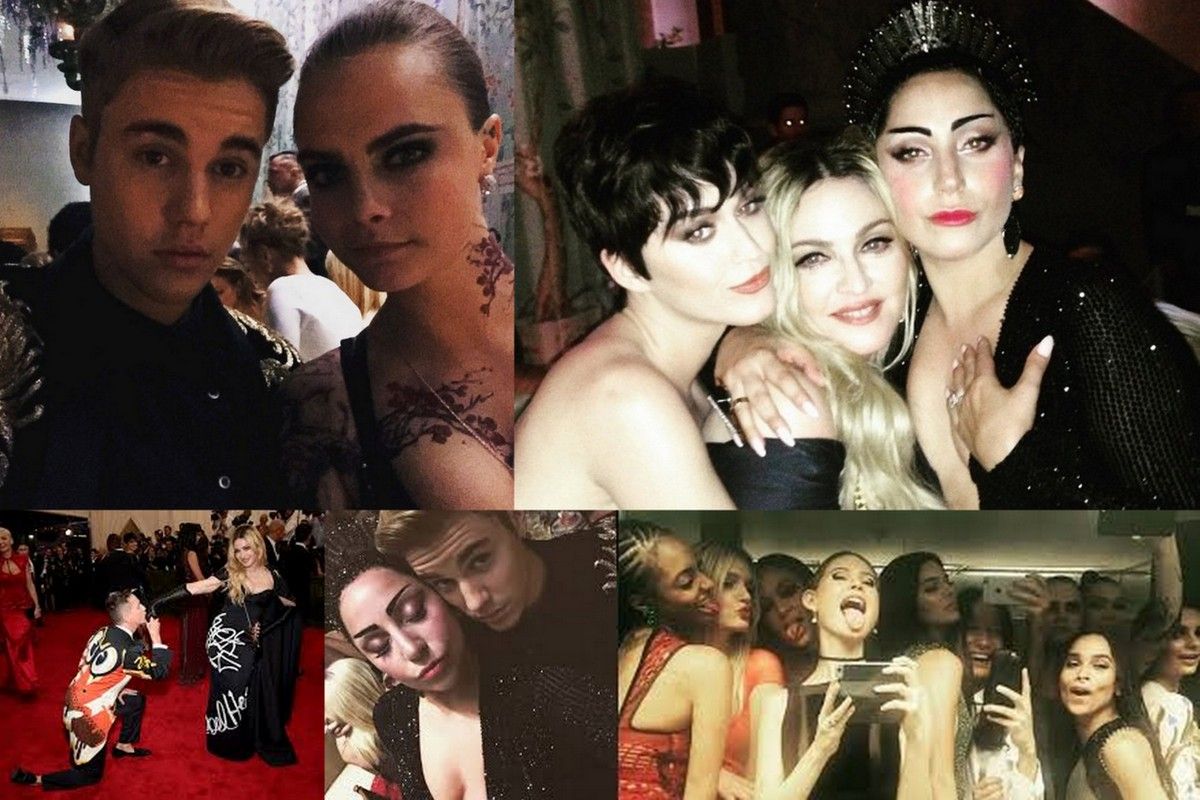 There were no cell phones and camera's allowed at the event itself...but hey....;-)

The jewelry Sarah Jessica Parker, or SJP, wore was from Jennifer Fisher. Jennifer stuck to the theme of China by using lots of jade. A beautiful stone that has this amazing green color. She personalized it especially for SJP. And by stacking the bracelets on her arms, SJP was not only fantastically on trend, but also representing Jennifer Fisher very well. Jennifer  Fisher has her own line of fine jewelry that she sells exclusively online and a brass collection that can be found in several high end department stores. Jennifer was a wardrobe stylist before she became a designer. 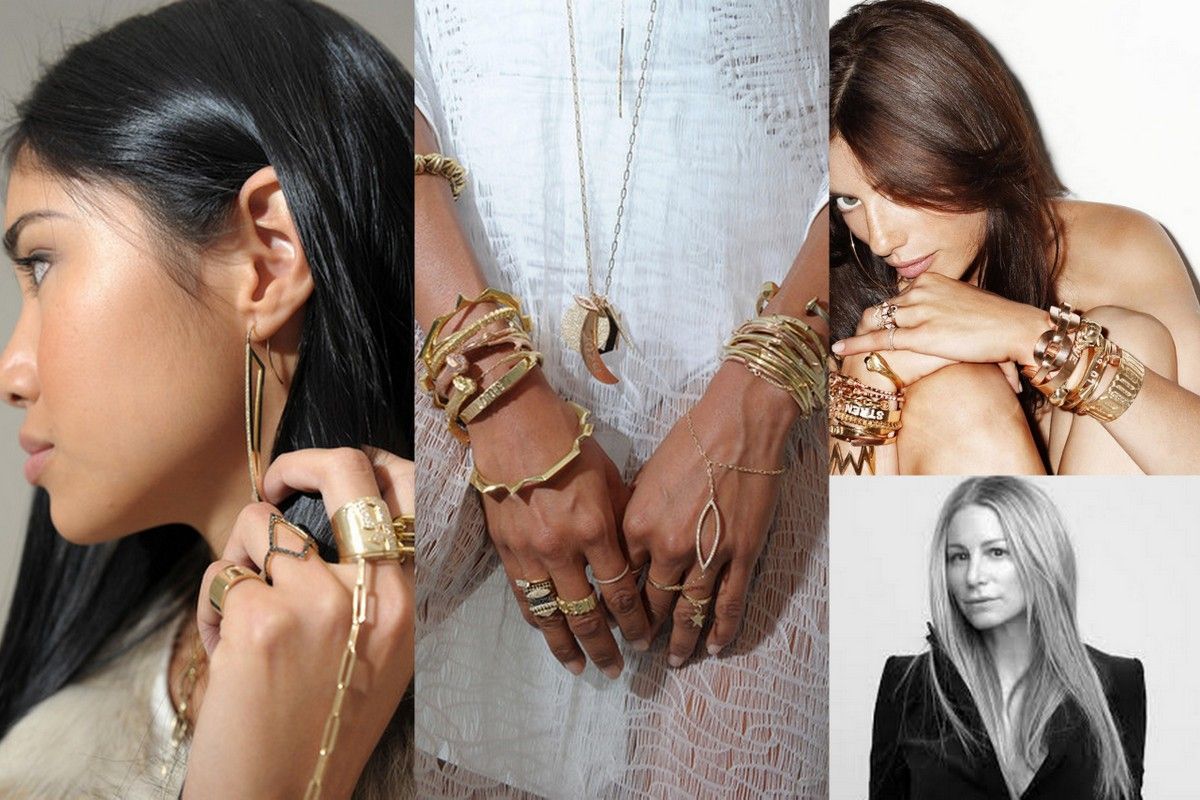 She loves stacking lots of jewelry, has a fun way of presenting her jewelry and has her very own fans amongst lots of women who are inspired by the trend of stacking jewelry and the many famous faces that wear this brand. 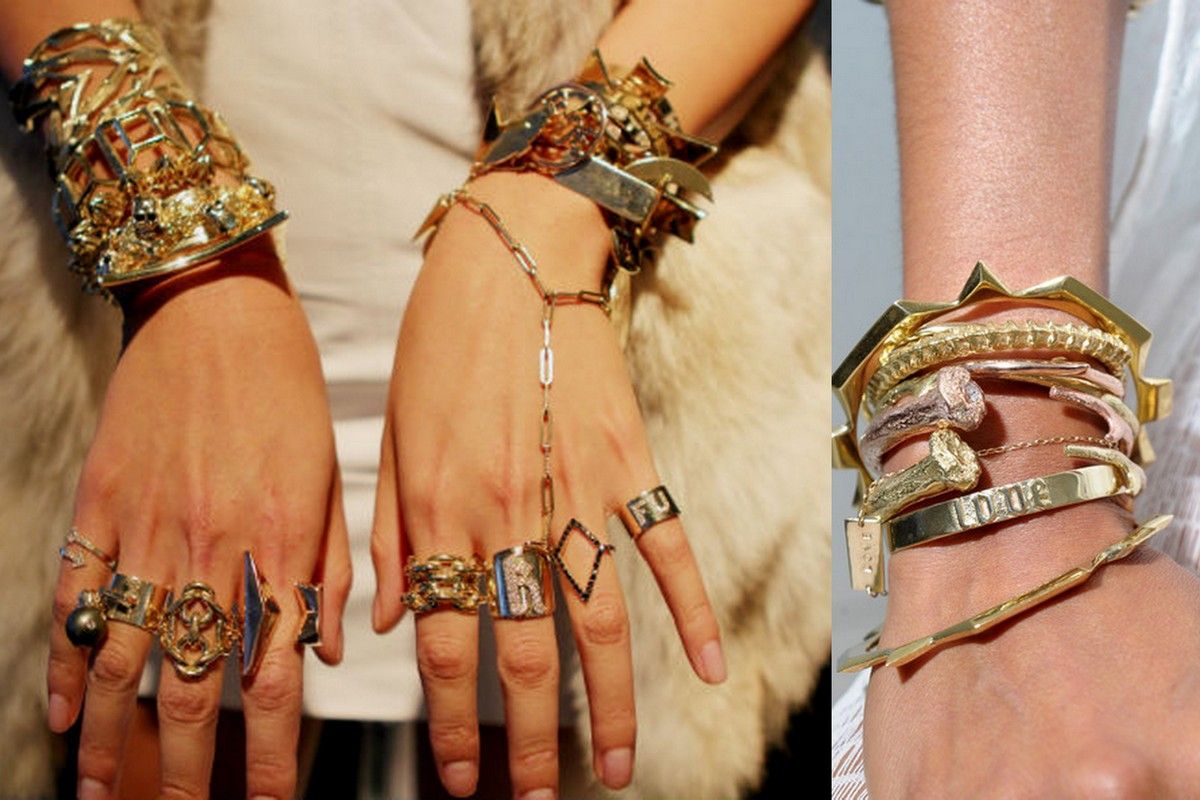 For those of you who love memes, here are some that Time Magazine has chosen to share ;-)

Photo's are from the internet, most of them by Getty images, Jennifer Fisher and Time Magazine.