By Esther Ligthart on Tuesday, 06 January 2015, in Inspiration

Alice in Wonderland appeared in 1865 and still is one of the best children's stories. Although the book is simply marvellous, it's probably Disney who made the story so well known still today. I watched the movie this week with my 6 year old son and afterwards I felt so inspired to do a blog about the story. Of course, filled with beautiful jewelry inspired by the famous Lewis Caroll story!

My own favorite? I will reveal that one to you too.:-)

Q/Pot jewelry did a whole range of Alice in Wonderland jewelry. Bracelet with wonderful pictures costs around 80 euro and is by Pictorial Charm Bracelets (Polyvore). Skirt by Folly & Foible, What a beautiful pair of shoes! Nicholas Kirkwood. Copper Bracelet is by Jezebel Charm.

Down the rabbit hole

Alice her story begins with a warm summer afternoon at a lake. Her boredom disappears when she suddenly spots a white rabbit. The rabbit talks to itself and mumbles that he is way too late, whilst watching his watch.  Alice runs after him and falls down deeply under the ground. She spots a little bottle with Drink me and she becomes tiny enough to pass through the door and enter a magnificent garden. 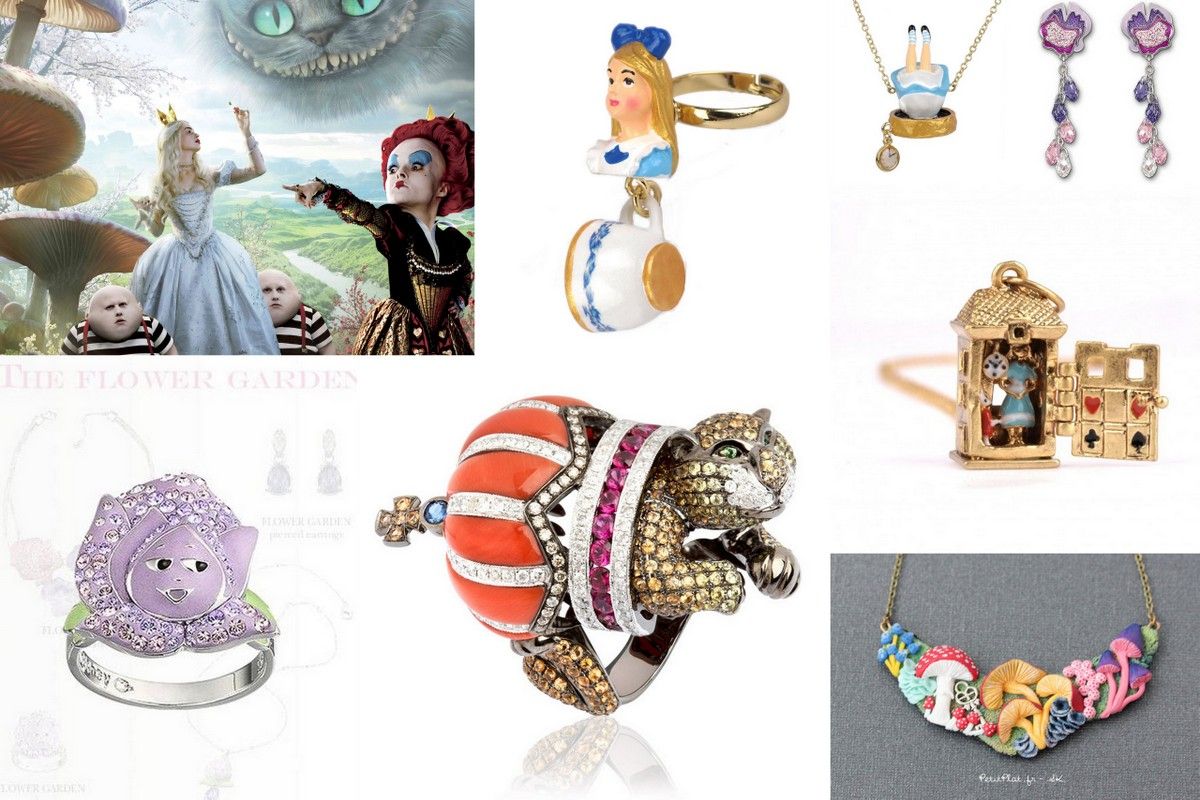 Imgae from the Disney movie with Johnny Depp, courtesy by Disney, The cute pendant and ring and pendant in the little house with the cards are by Les Nereides. The pink and purple earrings are by Swarovski as is the ring with the flower face. The cat jumping out of the crown is by Wndy Hue and the beautiful colored scenery of a key and the mushrooms is by Petit Plan

But Alice eats a cake which makes her grow much bigger than she wanted, she can’t pass the door anymore and she starts to cry. After that she becomes small again and she falls into her own pool of tears. She meets Mouse and Duck and a Dodo and other animals. Mouse tells her a story, but Alice doesn’t listen and the mouse gets angry. If she sees the white Rabbit again, he sees her as a maid and sends her off to get his items. She drinks from a bottle in the house and gets stuck again.  She then eats the cake and becomes small again. Alice meets the Caterpillar smoking a water pipe 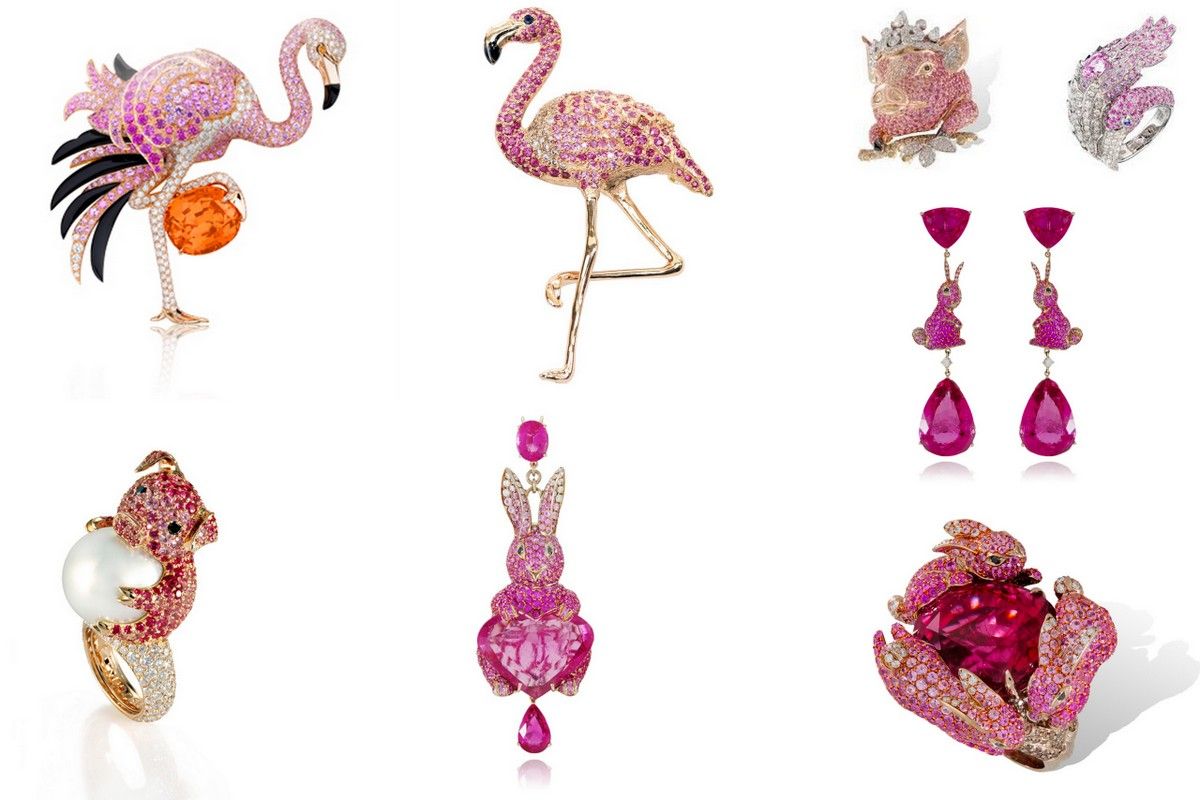 Pretty in pink jewelry! The flamingo's are by Van Cleef & Arpels and Scully & Scully, the piggy ring is by the ever intriguing Lydia Courteille and so are the bunny pendant and bunny bracelet in pink. The Flamingo ring on the right above is from Boucheron and the piggy ring holding a pearl is by De Grisogono.

Advice from a caterpillar

Alice has a confusing conversation with Caterpillar and by eating from the mushroom he sits on she changes once more. She now gets a tall neck which makes Pigeon think she is a snake. In the end she gets back to a normal height. 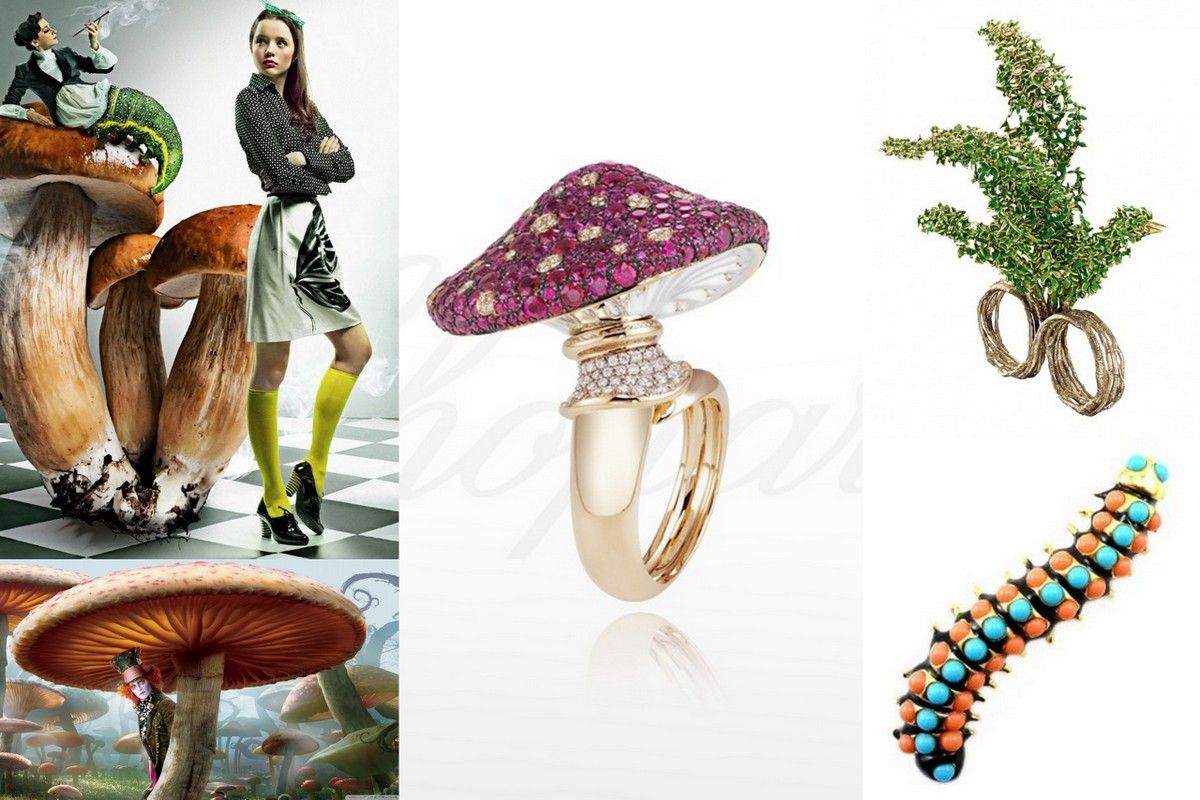 Look at the details of the mushroom on this ring by Chopard!  And the beautiful hedge cutted into the form of a bird and made into a ring! H. Stern did this beautiful piece of jewelry. The brooch is by Kenneth Jay Lane

Alice arrives at the Duchess house and just at that time an invitation for a play of croquet arrives from the queen. In the kitchen she finds the Duchess, a baby, a cook and the Cheshire cat. The Duchess tells Alice to watch her baby, who changes into a little piggy. She has a conversation with the Cheshire Cat and he points her towards the Mad Hatter and the March Hare 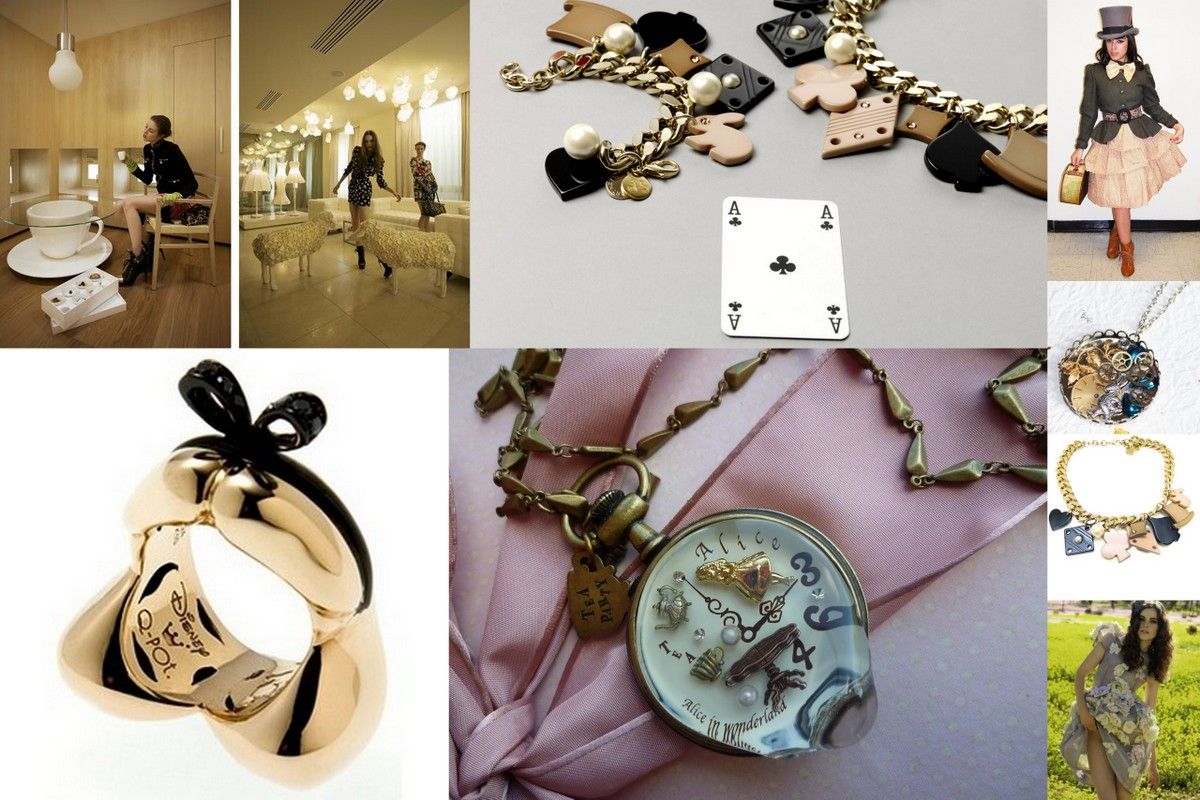 The rooms are actually part of a hotel by Moschino, the famous fashion brand. Bracelet by Stella Mc Cartney. dress by Betty Johnson, the Alice hair ring is by Q-Pot and the watch is also by Q-Pot. The little watch pendant is by Time in Fantasy and the necklace by Stella Mc Cartney

In the garden of the March Hare there is a tea Party with the Mad Hatter and the Dormouse . They both had an argument with Time and now it is just tea time, all the time at 6 in the afternoon. She now leaves and arrives at the tiny door that led her to the garden. This time she does everything right. 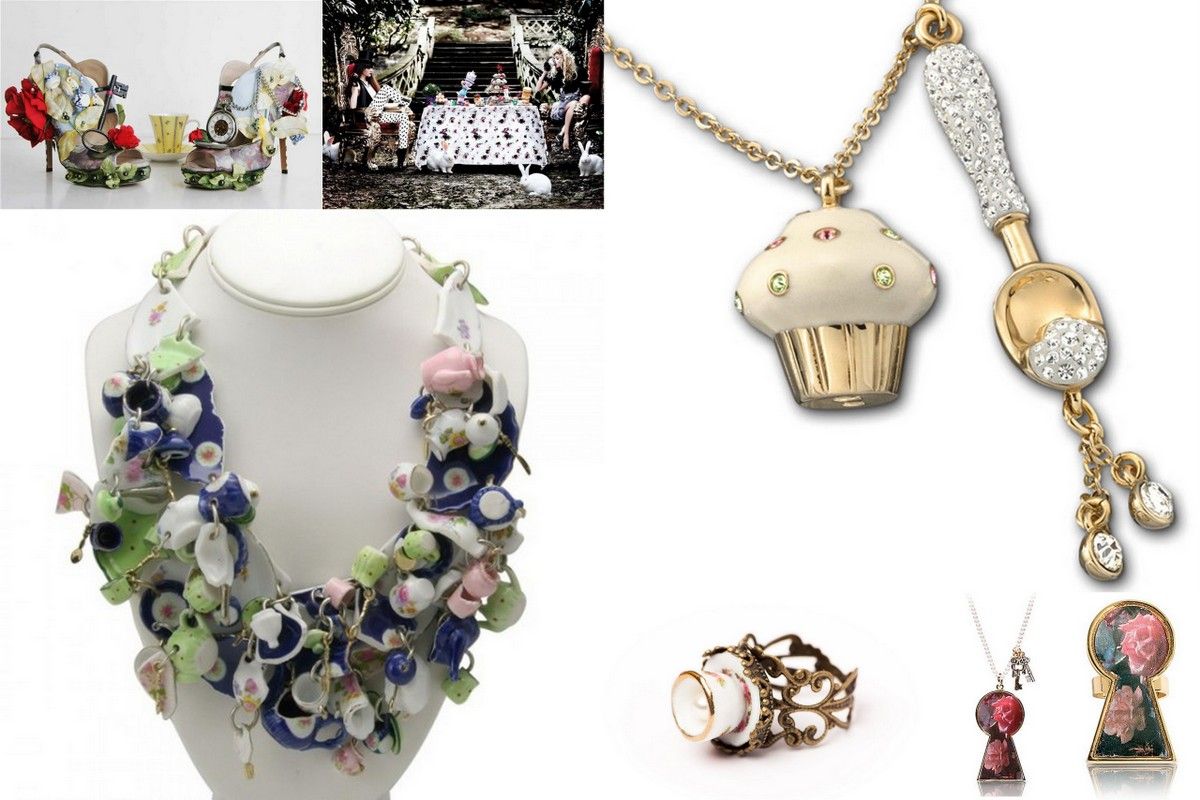 Details of the Nicholas Kirkwoord shoes, the stunning necklace with cups reminding us of the tea party is by Tom Binns, the lovely cake and spoon pendant are by Swarovski and the ring is a bargain at just 15 euro from Krisxchi. Keyhole pendant and ring are again by Tom Binns

In the garden she encounters three gardeners that look like Playing Cards and they are busy painting the roses red because they accidently planted white one. Then arrives the Queen of Hearts with her guests. Alice rescues the three gardeners from being decapitated by the terrible Queen of Hearts.  Then they play a game of Croquet with hedgehogs as balls and flamingo’s as the sticks. 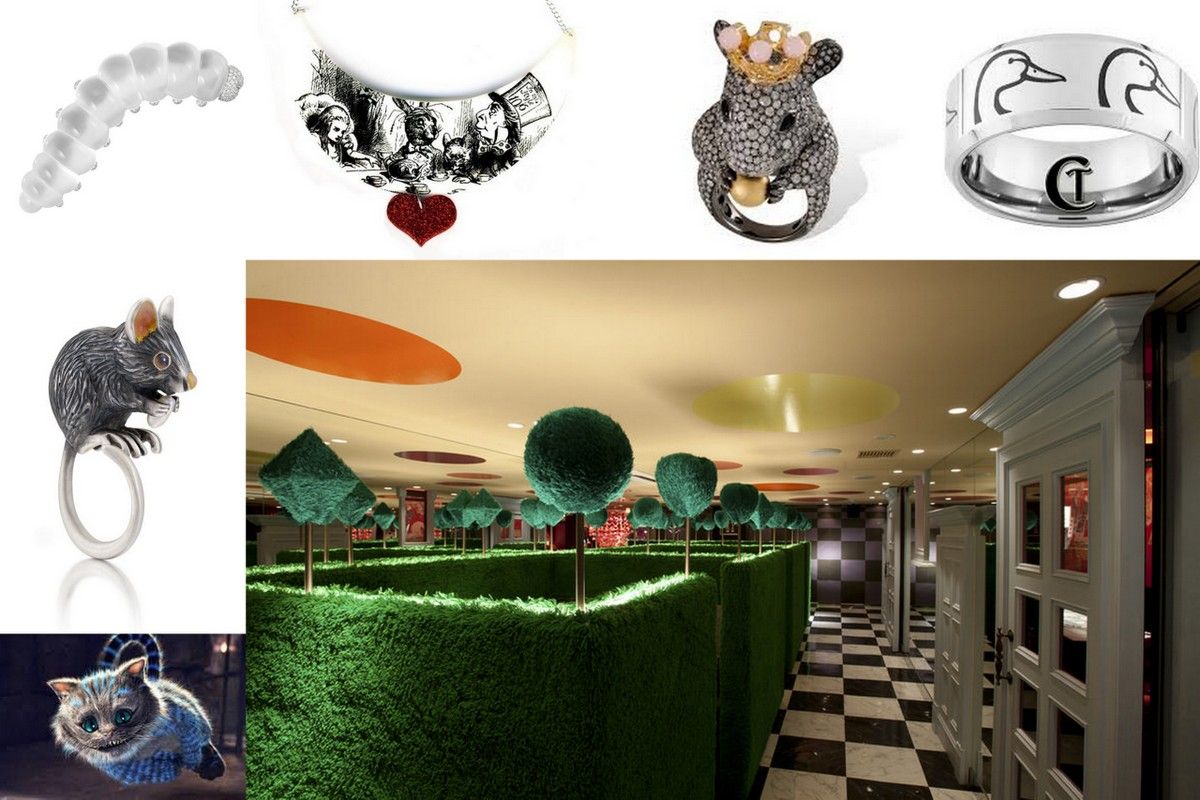 Caterpillar brooch by Vhernier. The necklace is by Paraphernalia and the mouse ring by Lydia Courteille. The ring with ducks is by Tungsten Carbide and the delightful mouse on a ring is by the very kind jewelry couple: Manya & Roumen

Alice meets the Duchess again. Then the Queen brings her to the Gryphon, who takes her to the Mock Turtle, who is half turtle and half calf ( in fact: mock turtle soup was made from calf and not from turtles)

Necklace is by Tom Binns and look at that stunning ring with the Cheshire cat on the tree, I am once again in awe by H.Stern

The Mock turtle and Gryphon demonstrate a dance and then ask Alice to tell them about her adventures. Then they hear that they need to rush to the court room. 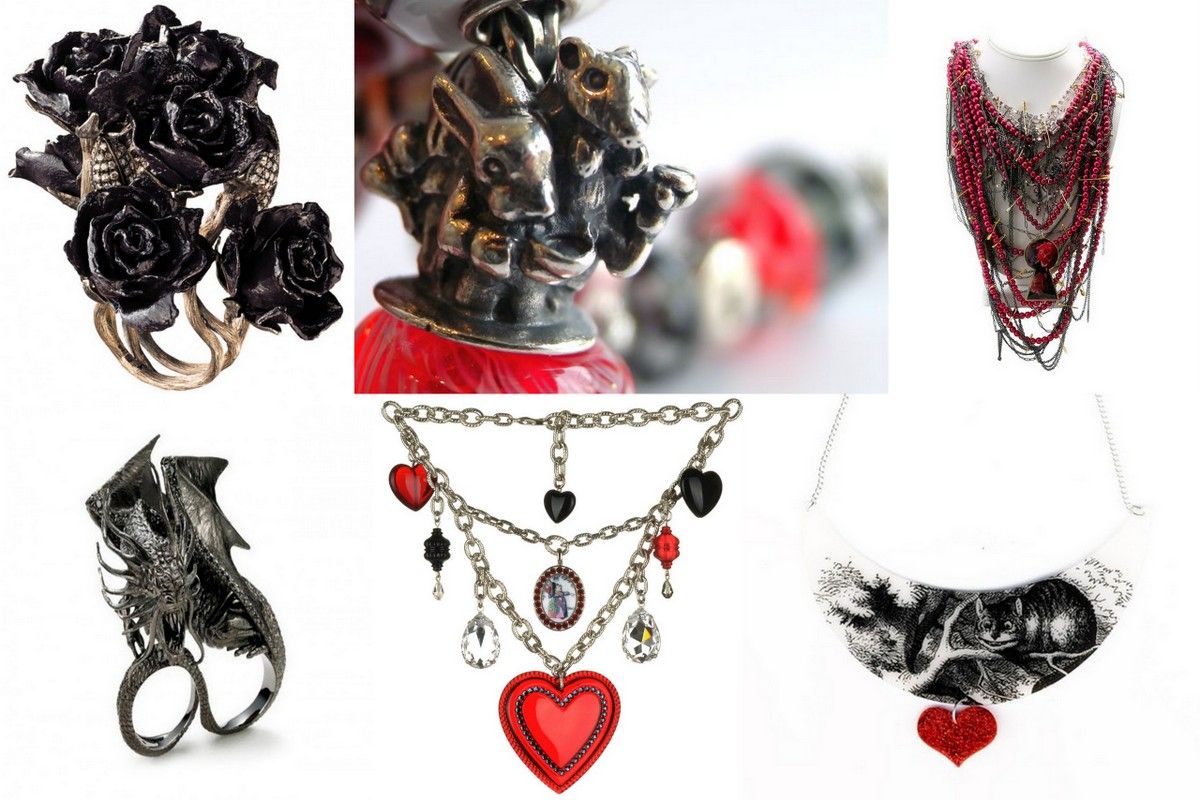 The blackroses ring with faces in the flower on top is by H. Stern from Brasil. The detailed bead is by Trollbeads, necklace by Tom Binns. The Gryphon ring is amazing! Not for anybody's taste but if you look closely: it's a piece of art! Necklace with heart and the Queen of hearts: Tarina Tarantino and the cute necklace with Cheshire cat is by Paraphernalia

Who ate the cakes

The Knave of Hearts is accused of stealing the cakes baked by the Queen. The King is the judge and the Mad Hatter and the cook are witnesses. Then Alice is called to witness. 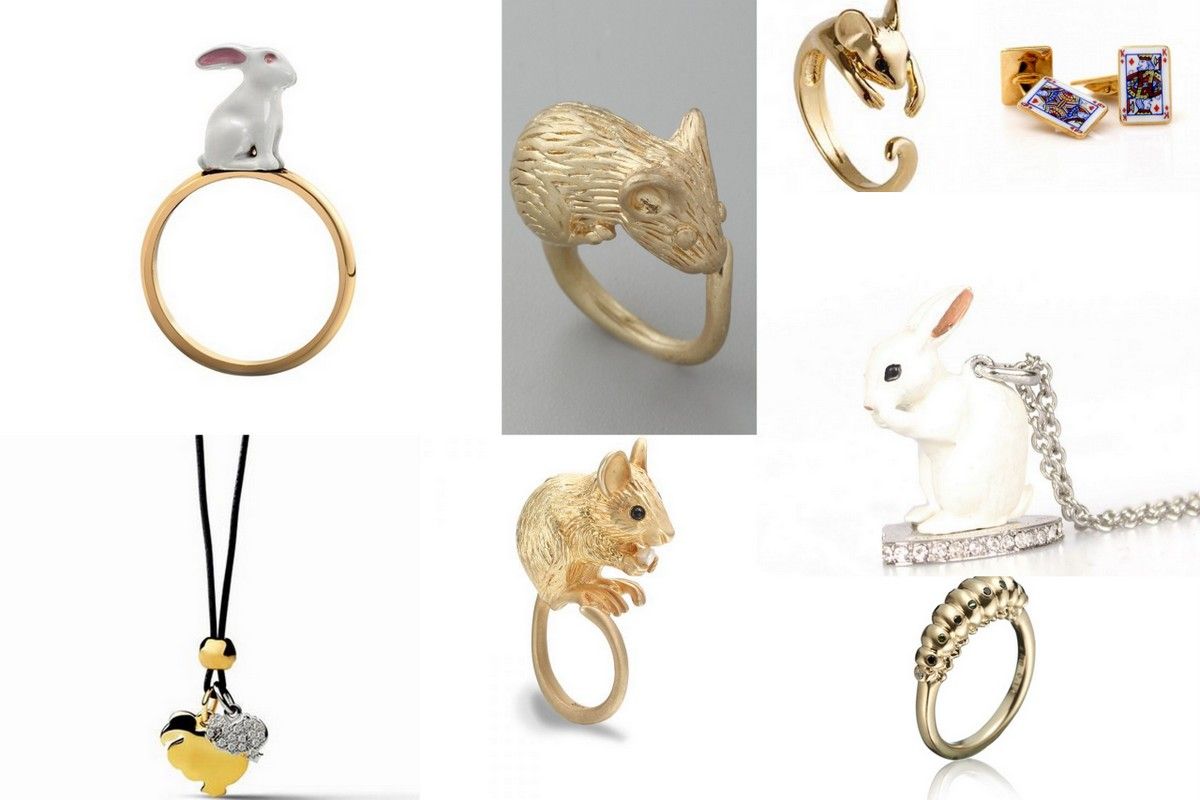 Rabbit on a ring...by Solange Azagur-Partridge. Mouse ring by Marc Jacobs, another mouse ring by Oliver Bonas. Cards as cufflinks by Deakin & Francis. The Dodo is not so commonly found in jewelry but one brand named a whole collection after the vanished bird: Pomellato. The golden mouse ring is by Manya & Roumen and the Caterpillar ring is by Hirotake. The white rabbit pendant is by Viviene Westwood.

Alice who slowly grows bigger and bigger, declares she knows nothing about this case. A poem is read out loud and Alice protests against the whole thing, which makes all the cards go against here.  Alice wakes up next to her sister and tells her all about her dream. 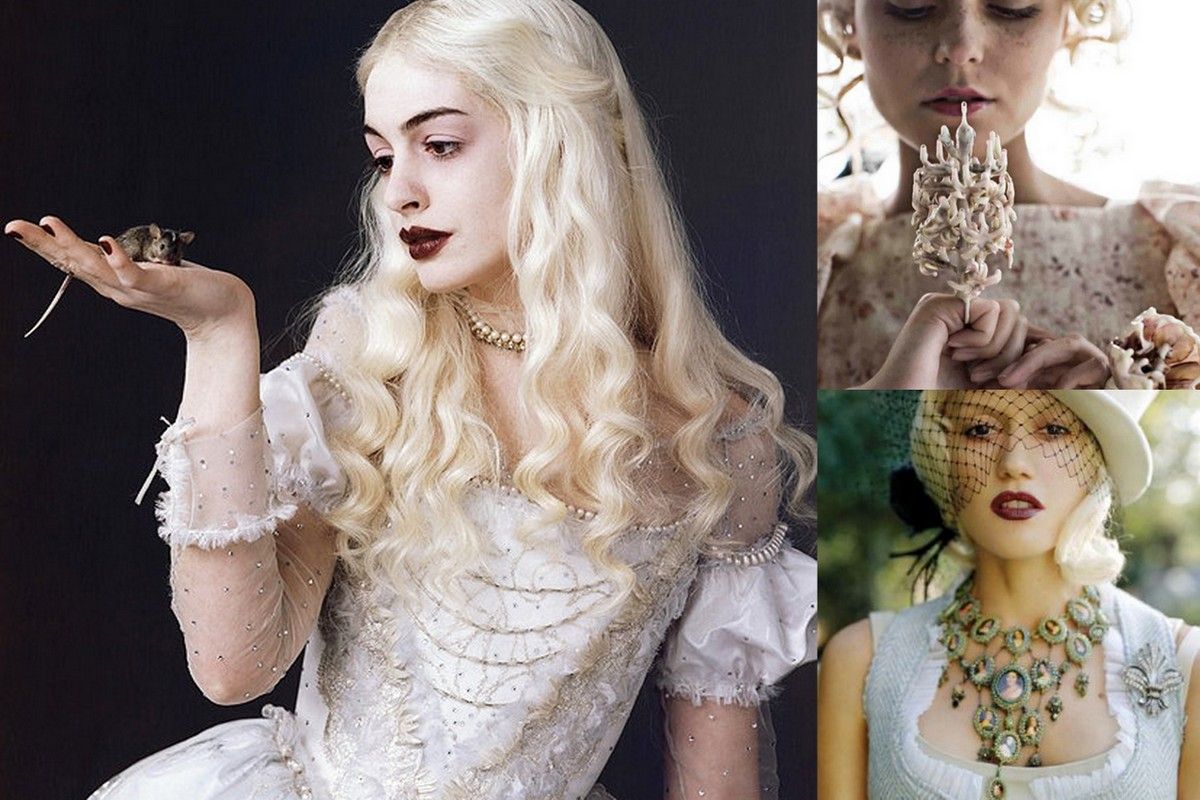 Anne Hathaway is gorgeous as the white queen. Fantastic ring by Alidra Alic

The story was written after a trip on a lake that Lewis Carroll made on the fourth of July, 1862 with Robinson Duckworth and the three sisters Lorina, Alice ( 10 years old at the time) and Edith Liddell. All daughters of the  Henry George Liddell, who was known for his monumental work creating the dictionary : a Greek English Lexicon. It was Alice who urged him to write the story down and when he showed a rough version of this, the reaction of the various publishing houses was so positive that he started working on a much more elaborated version which appeared in 1865. 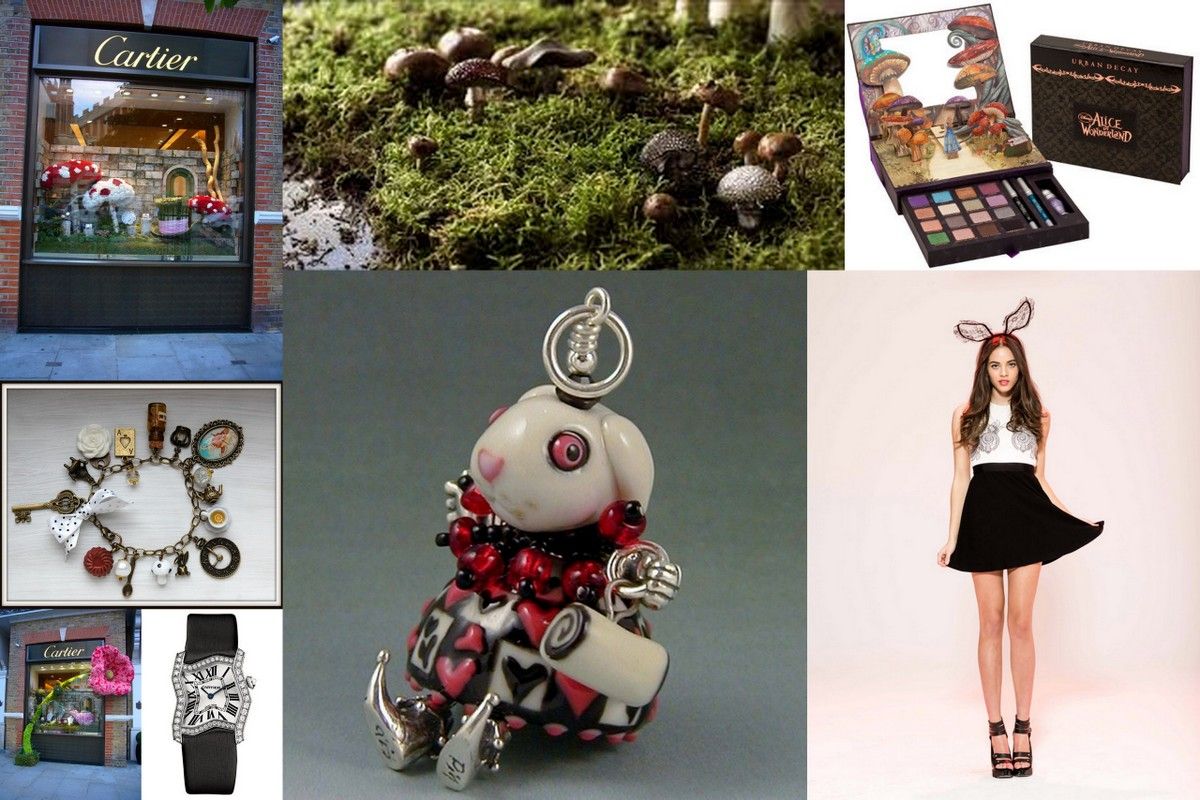 Cartier embraced the Alice in Wonderland theme in its windows too. The beautiful mushrooms are actually jewelry by Hemmerle and I am a huge fan of Urban Decay, love this box! The charm bracelet is available on Etsy and is by Eve is Scrapping. The watch is by Cartier and the cute pendant is by Joan Millar. The cute outfit is by KuKu.

My absolute favorite piece of Alice and Wonderland jewelry?  These ones for sure: 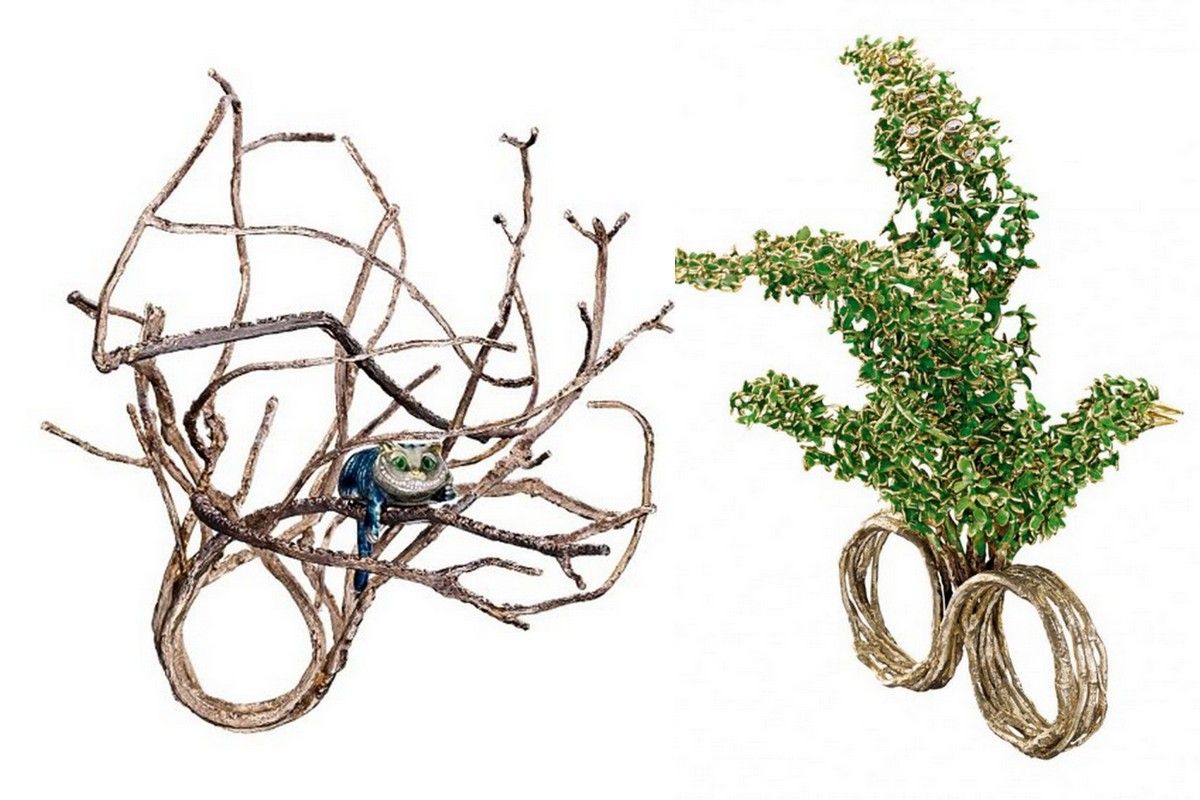