By Esther Ligthart on Thursday, 04 June 2015, in Inspiration

One of my favorite interior design magazines, Residence, featured an article about Darwin, Sinke & Van Tongeren. Two guys that were into advertising, sold the business and became: taxidermists. A profession that seems to divide people into two groups. Either you like it, or detest it. But what this Dutch couple, much loved by Damien Hirst, tries to do, is so unique that even the skeptical are in awe of their creations. Let’s see why! 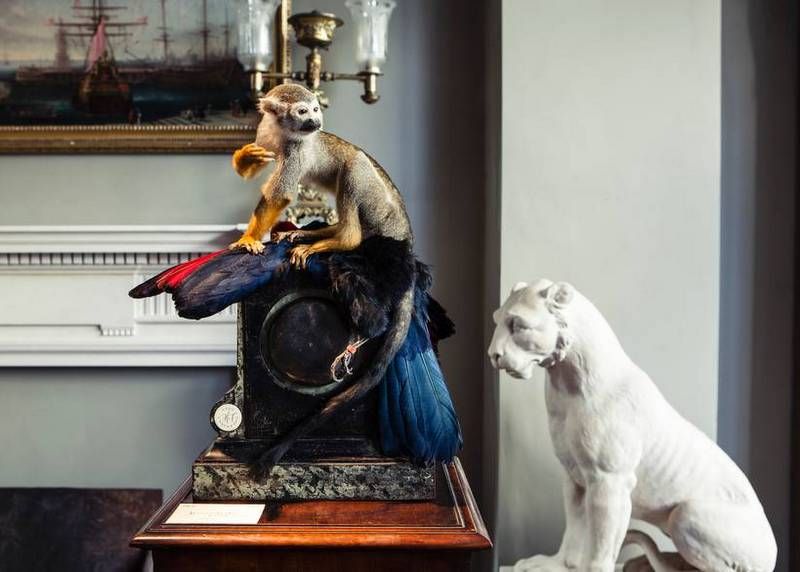 The fact that the famous and revolutionary artist, Damien Hirst, bought their entire first collection gave a major boost to their company. But when asked why they became taxidermist in the first place, was there a plan, an inspiration, a dream perhaps?...the bearded men that look both like a Dutch painting from the 17th century, have no real answer. 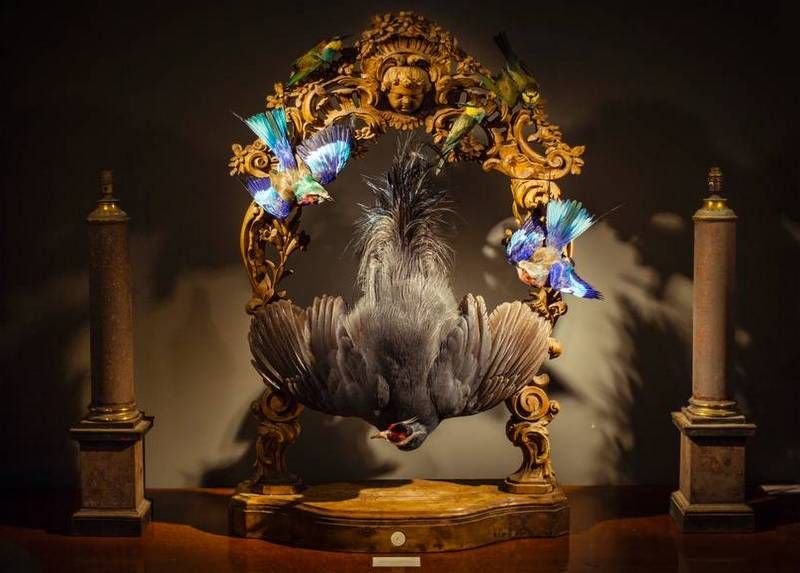 From advertising to taxidermy

Van Tongeren sold his advertising company and took a sabbatical. Whilst traveling with his family around the world, he suddenly knew that this was what he wanted to do. And there seems no more to it than just knowing. Blessed without a doubt, because many artists are full of self-doubt. It took van Tongeren a while to persuade a famous Dutch taxidermist, who made him swear that he would never poach in his own network of breeders and zoos, the places they normally get the animals from, to train him and work for free for a year. Then he became a part-time taxidermist for the National Museum of Natural History in Leiden, Holland, that has one of the largest collections taxidermy collections in the world. 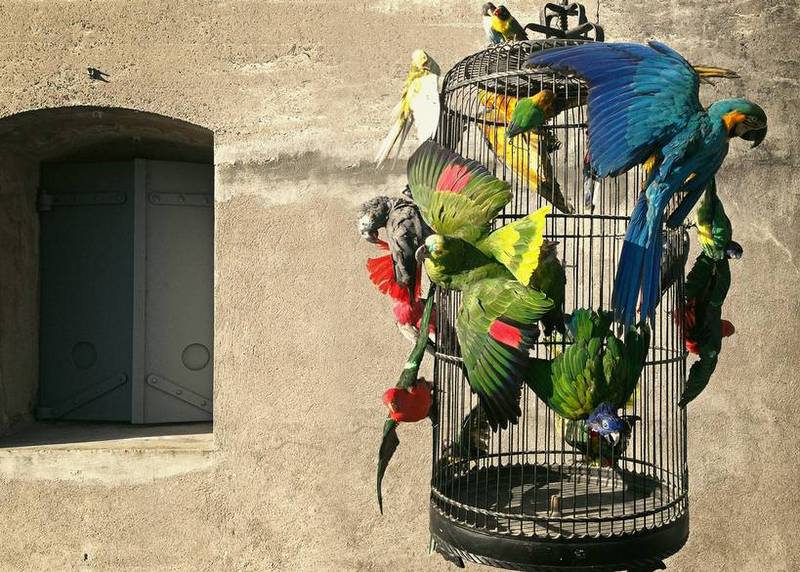 Jaap Sinke had never thought he would become a taxidermist. Although he always loved animals and learned in art school how to draw anatomically correct animals and had a father who was a vet. But when Ferry van Tongeren approached him, he went along and together they create magic. 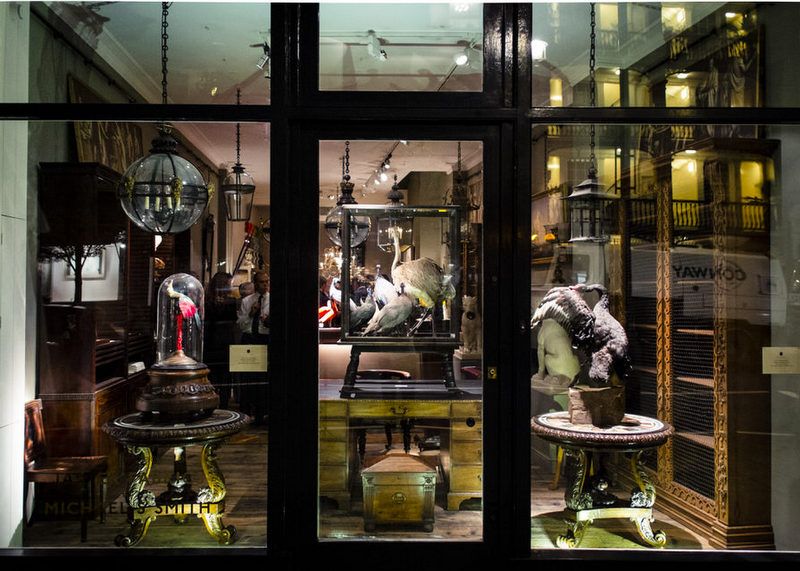 Taxidermy was so not cool

Taxidermy has been very popular, had its own heyday even, in the 19th Century, but after that, it soon became something not only morbid but often of very poor taste. Darwin, Sinke & van Tongeren, make the inside completely from scratch. With wire, clay, and wood. No molds readily prepared but everything from scratch. Jaap Sinke still gets to be the artist that draws animals but this time, he draws on them to color the beak and other body parts that need a bit of touching up. He also designs the composition, with an immense eye for details. 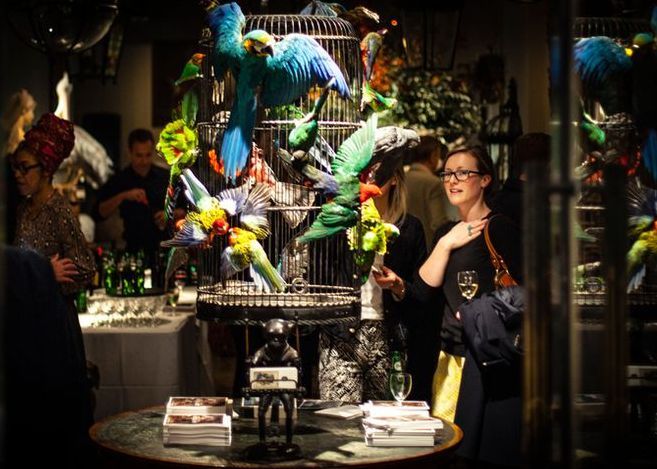 Whilst they processed the birds, they noticed how beautiful they were floating in a special bath, that prepares them for the taxidermy process. They are just the skins of the birds and they need to stay in that bath for quite some time. After a while, the floating starts and it seems like a water ballet. They started to take photographs of the birds like this and they were spectacular! 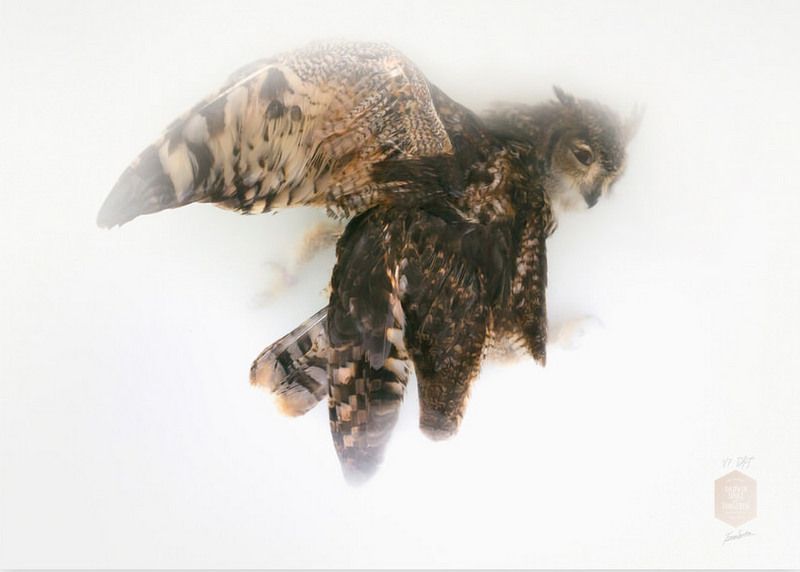 They bought a bigger bath for the bigger birds like flamingos, to allow them to float as well. The prints of these photographs have also been bought by Damien Hirst, but you can still buy some of them on their website or on 1stdibs.com. 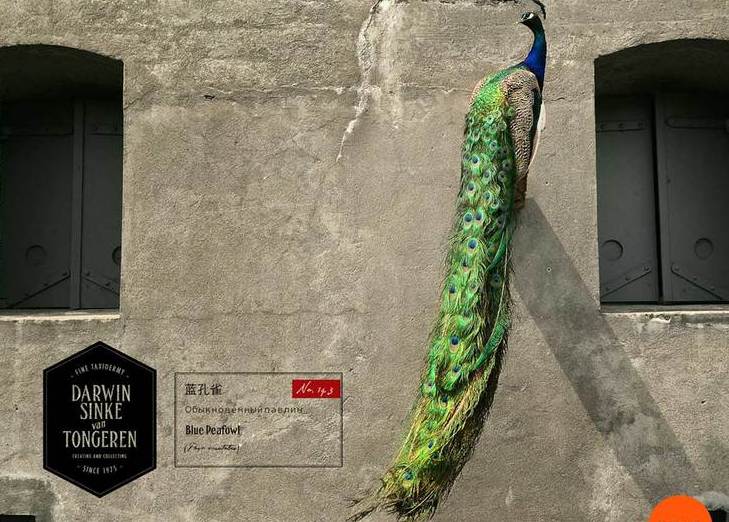 What makes Sinke and van Tongeren so very special?

What makes Darwin, Sinke & van Tongeren so special? I believe that it is their true love for the beauty of the animal. Their artistic approach is so beautiful and has nothing to do with some urban fashion of creating a cool collection, but much more with the Old Masters who portrayed the exotic birds brought back by explorers such as Darwin. And Darwin has been a huge inspiration for both. 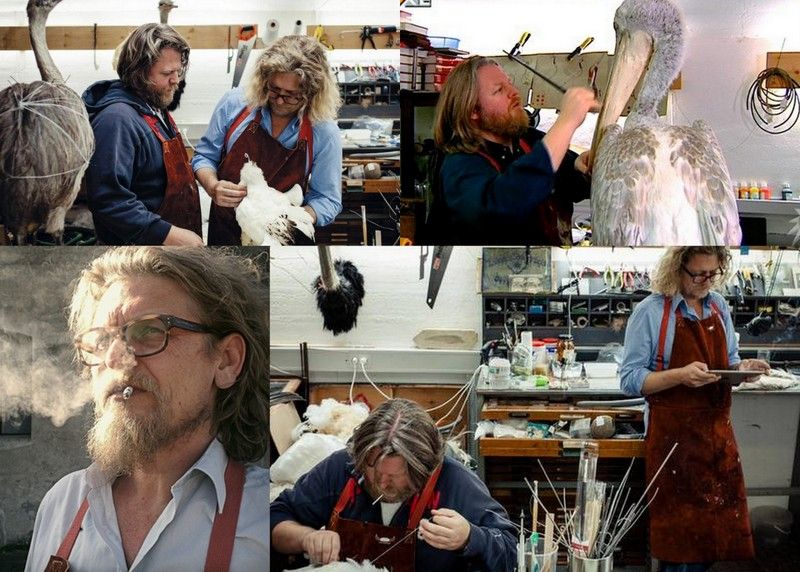 All animals have died a natural death. No animal gets killed to be mounted. In fact, Darwin, Sinke & van Tongeren say that they save them from ending in a bin or container and be just destroyed. The usual ending for animals like these after they die in a Zoo or at a breeder. It’s been very hard to build an own network of providers, they say, and they still have a long wish list of animals and compositions that they would love to create. But they would never stuff animals from game hunting nor do they mount your deceased pet. All paperwork must be also just perfect. ‘’We sell to the U.S. but also to the U.K., both countries are extremely strict on animal welfare’’, they said. And in Holland, it’s no different of course. 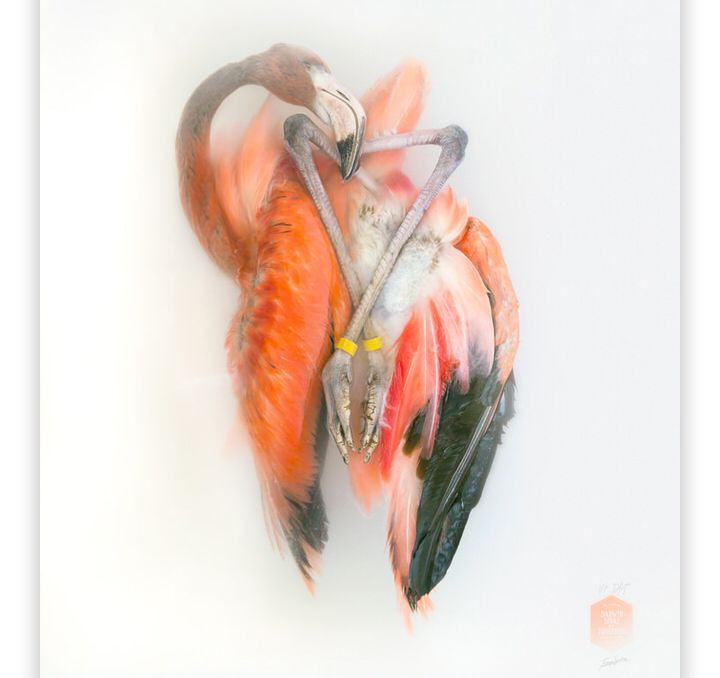 Currently, there is hardly anything to buy from their collection. Being the artists they are, after having sold everything almost from the first collection, they are now extremely engaged in creating a new collection, that hopefully will be ready in September. 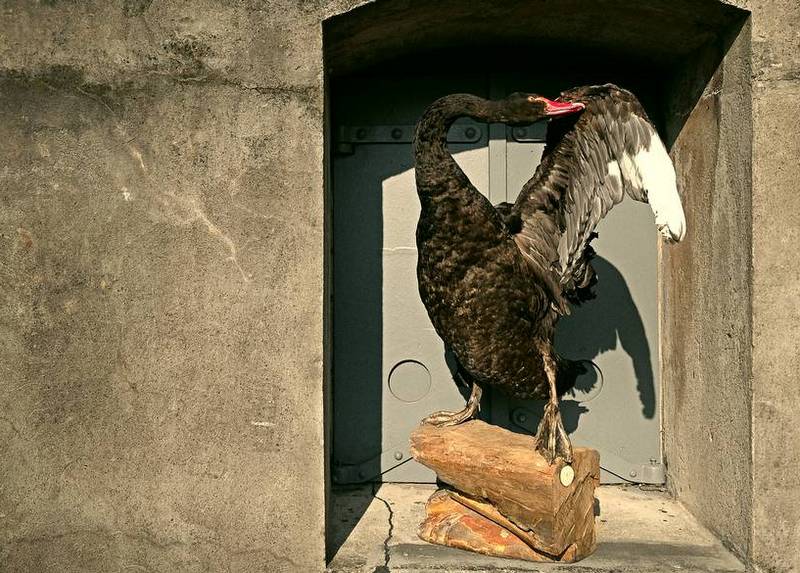 My opinion on this collection

What do I think of this collection? I loved the collection at first sight but had to do some soul searching first, to see if this really matches with my own morals and beliefs. I love animals, in fact; I adore them. I respect them so much and I am forever having trouble with me eating meat again (I was a vegetarian for 8 years) and I feel a moral duty to defend animal rights. I also love nature and feel an almost overwhelming respect for it. I am not sure, whether it is the absolute beauty and respect that these artists show when working with the animals they have or the fact that indeed, all animals were going to be destroyed if not. But here is the thing: I sense a sort of deep emotion when I look at the work of Darwin, Sinke & van Tongeren. It’s the emotion that I described above about love, respect and being overwhelmed by the love of nature.

How could I not fall for them? 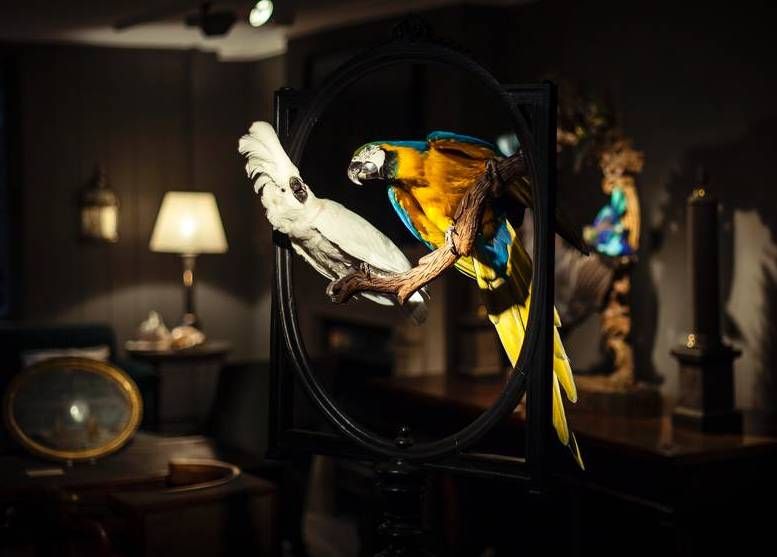 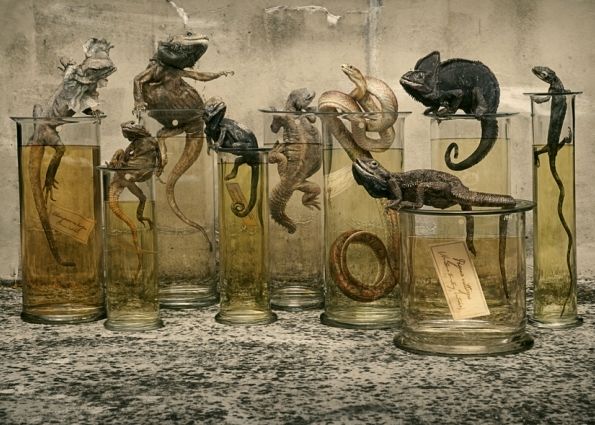