The queen of pearls: Tahitian pearls are amazing!

By Esther Ligthart on Tuesday, 21 July 2015, in Inspiration

Tahitian pearls are called the Queen of Pearls. And that’s not surprising. This pearl is so beautiful and fascinating! Come and explore beautiful Tahitian pearl jewelry….

Tahitian pearls go by a number of names: black pearls, black south sea pearls etc, but most commonly they are known for their place of birth. Around the island of Tahiti: Tahitian Pearls …

They come in a variety of colors, although they are called black pearls, they are rarely really black. There are all kinds of greyish colors and then there are green grey ones, the eggplant colored dark grey ones and many have colors of blue and silver shimmering through. But it’s the peacock color, a pearl with different shades shining through the dark grey undertone, that is considered to be the most valuable. 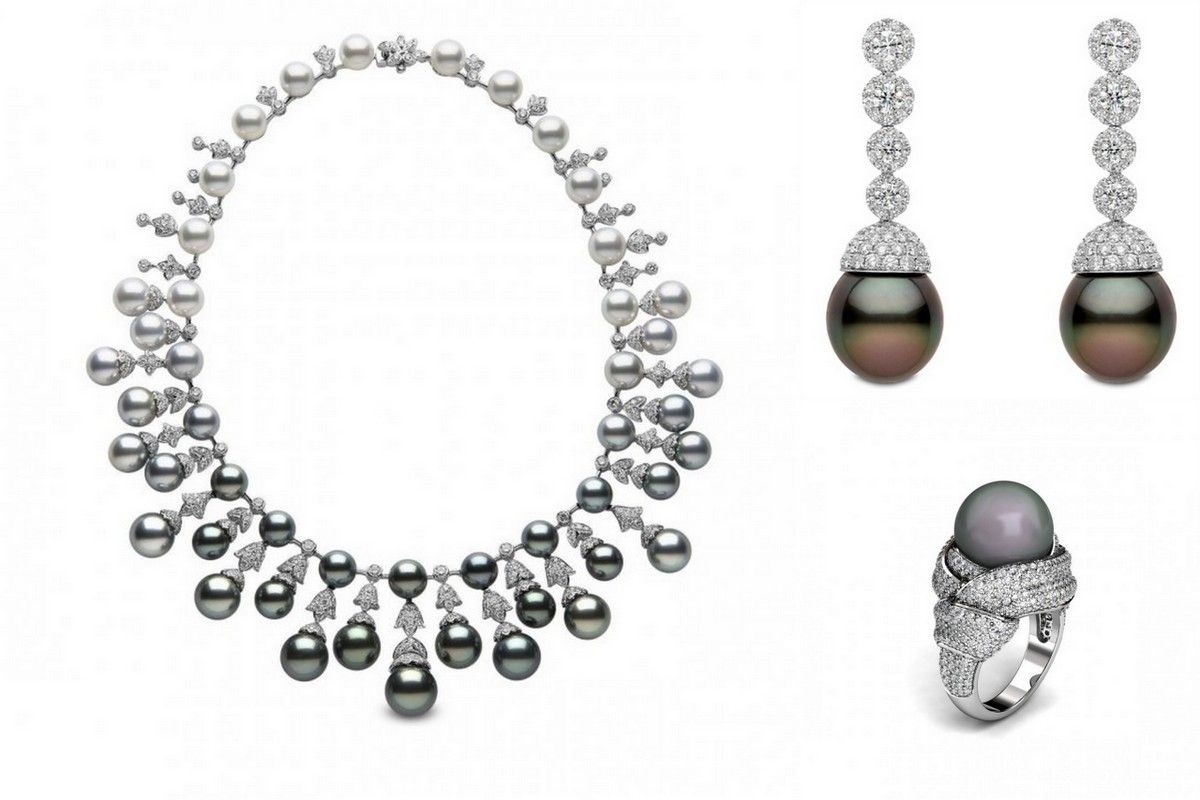 Necklace is by Yoko London and so are the fabulous earrings. The ring is by Stanislav Drokin

When someone buys a Tahitian pearl

Some say that one buys Tahitian pearls only when you already possess a string of Akoy or white pearls. But I found this actually not to be true. There are many people who fall in love with this beautiful pearl, but find its white cousin a lot less interesting. However beautiful, one might see the black pearl as slightly more adventurous. Like the baroque pearl buyers aren’t exactly the same people who buy that perfect string of white pearls.

Alishan Vienna Palladium 18kt rose gold blackwidowspider,in platinum diamonds and rubies, above a parure by Shoeffel and below a brooch by Jewellery Theatre 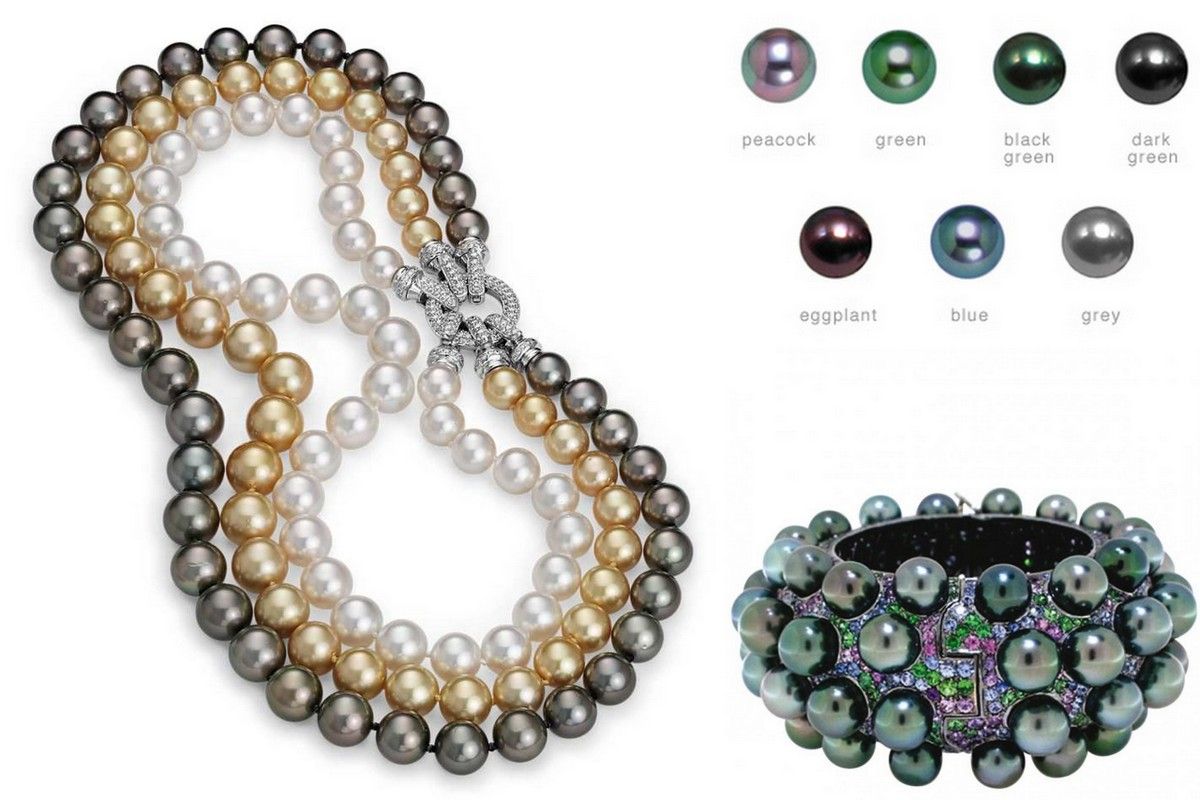 I remember the day I saw my first Tahitian pearl. I lived in Valenza and was taken to the office of one of the pearl dealers that live in that small but wonderful little town. As we sat down he grabbed this small container and within wear these wonderful big green grey pearls. They were bigger than most white pearls I had seen so far and they were incredible! I fell in love with them immidiately. And have had the pleasure to sell them in the jewelry store we had in Italy, many many times. And every time I witnessed the marvel of the woman in front of me, trying a Tahitian pearl necklace or ring.

I have always loved them for their size and color.

Blue Nile Tahitian and diamond necklace sells at 995,- dollars and the eggplant shaped and colored pendant is by Baggings, who seemed to have taken the shape of the pearl to define the final design. Very lovely! 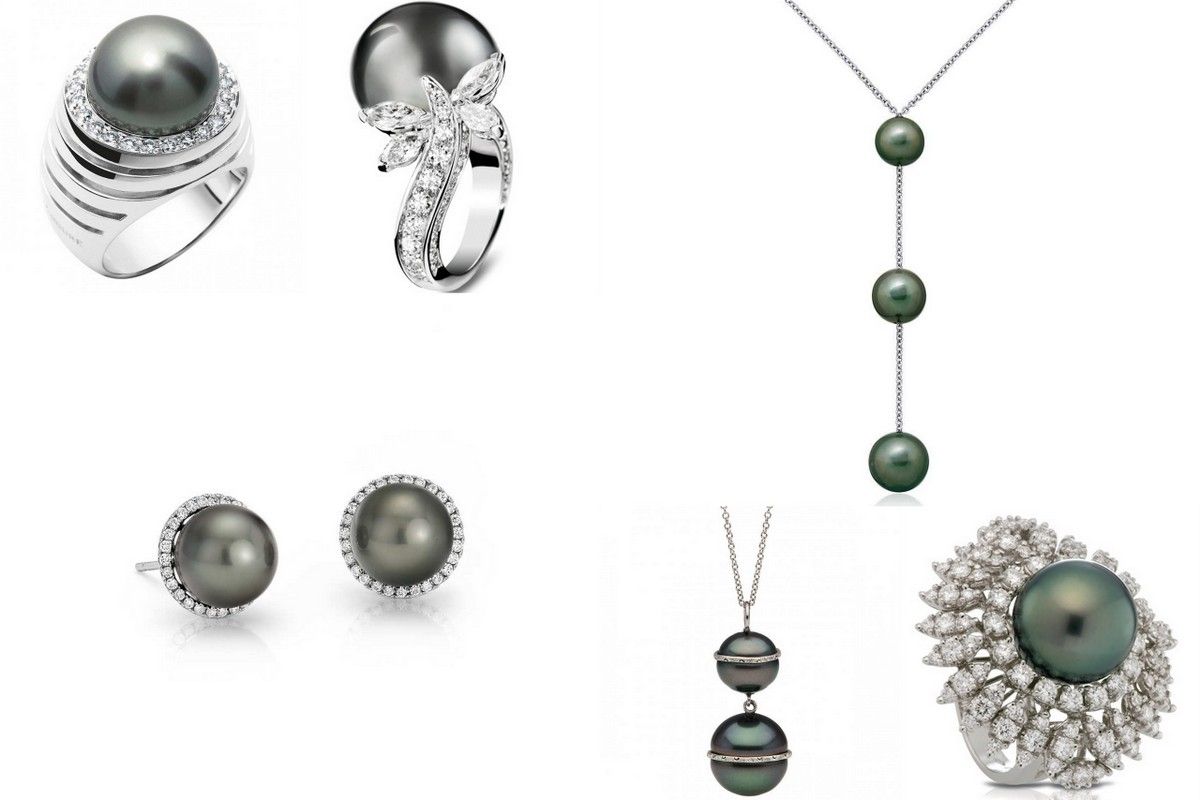 Above left: Alain Roure ring, Mikimoto ring, necklace with three pearls Blue Nile (840 dollars) Earrings are by Blue Nile and retail at 1095,- dollars, the pendant with the two pearls is by Pearl Paradise and the beautiful important looking ring is by George Hakim

How they are cultivated

The Pinctada Margaritifera mollusk is the one that produces the Tahitian pearl. This mollusk gets a piece of bead inserted that comes from the mantle tissue of a donor mollusk. This provides the mollusk with epithelial cells to make sure that it will produce nacre around the nucleus. All materials inserted are natural and organic. The shell is sanded and rounded to form the bead. In this way it will produce better and rounder pearls. The whole proces is done by an expert grafter who has to work extremely careful and yet extremely quick at the same time as the oyster doesn’t live for long outside of the water. Natural Tahitian pearls are insanely rare, so never believe it when someone claims to have a necklace or ring with only natural pearls. They are priceless….:-) 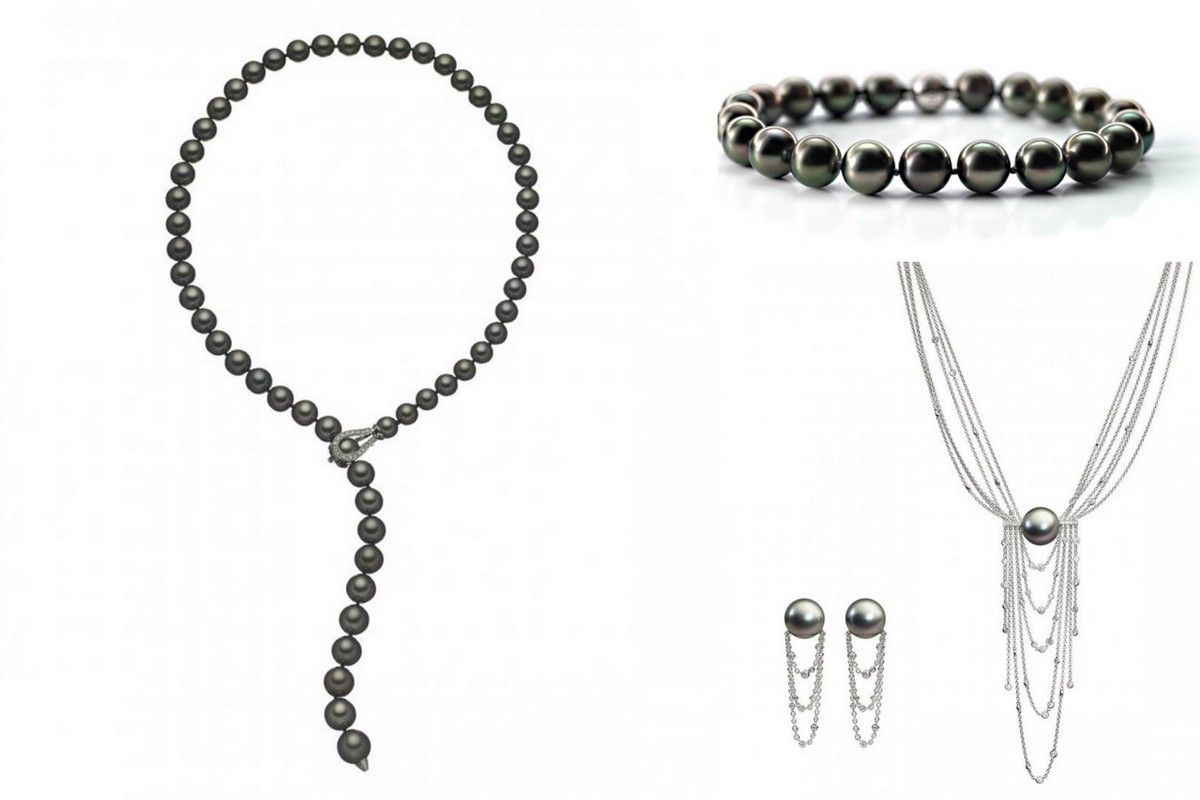 Necklace is by Baggins, the bracelet is fabulous and with very regular pearls, Mikimoto and the set is by Schoeffel 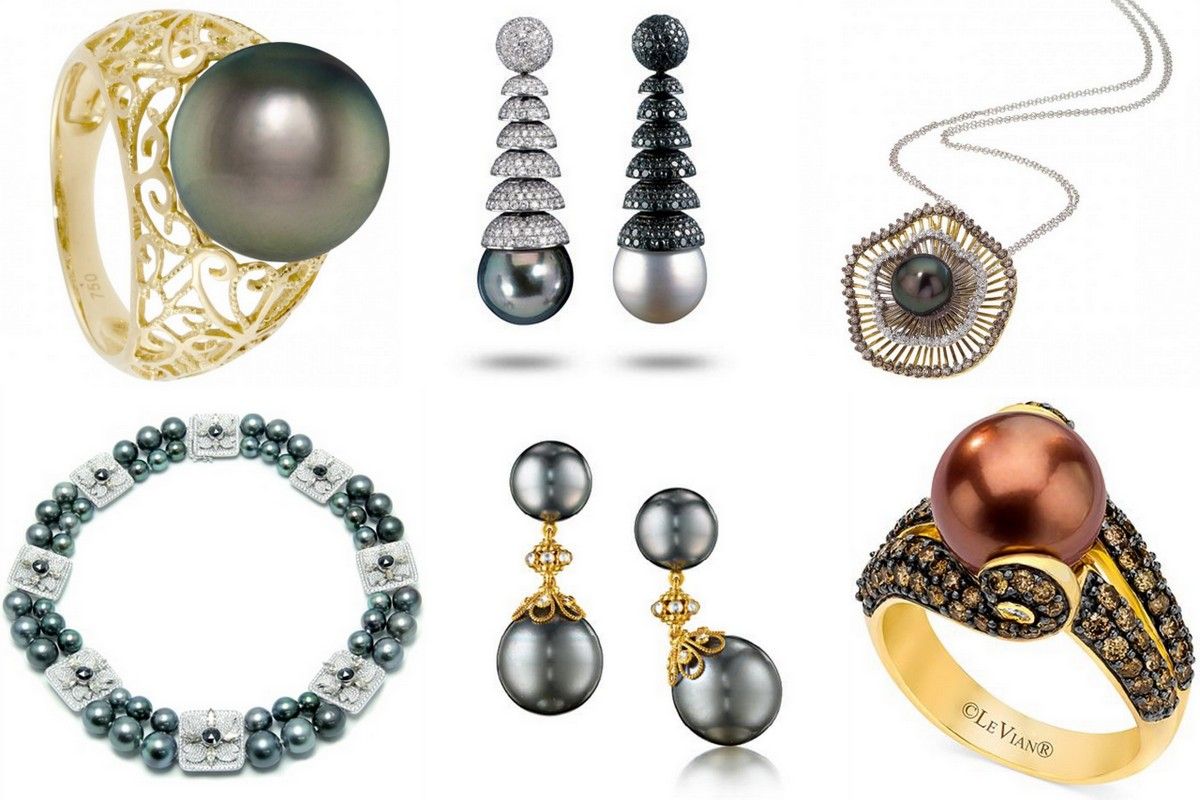 Ring by Schmittgall, Earrings in the middle above are so so gorgeous: deGrisgono, the pendant with necklace is by Bergio. The necklace with the amazing details and stunning pearls is by Kinetic Artwork, the beautiful classical set of earrings is by: Verdura and LeVian went for the brown version of the Tahitian pearl 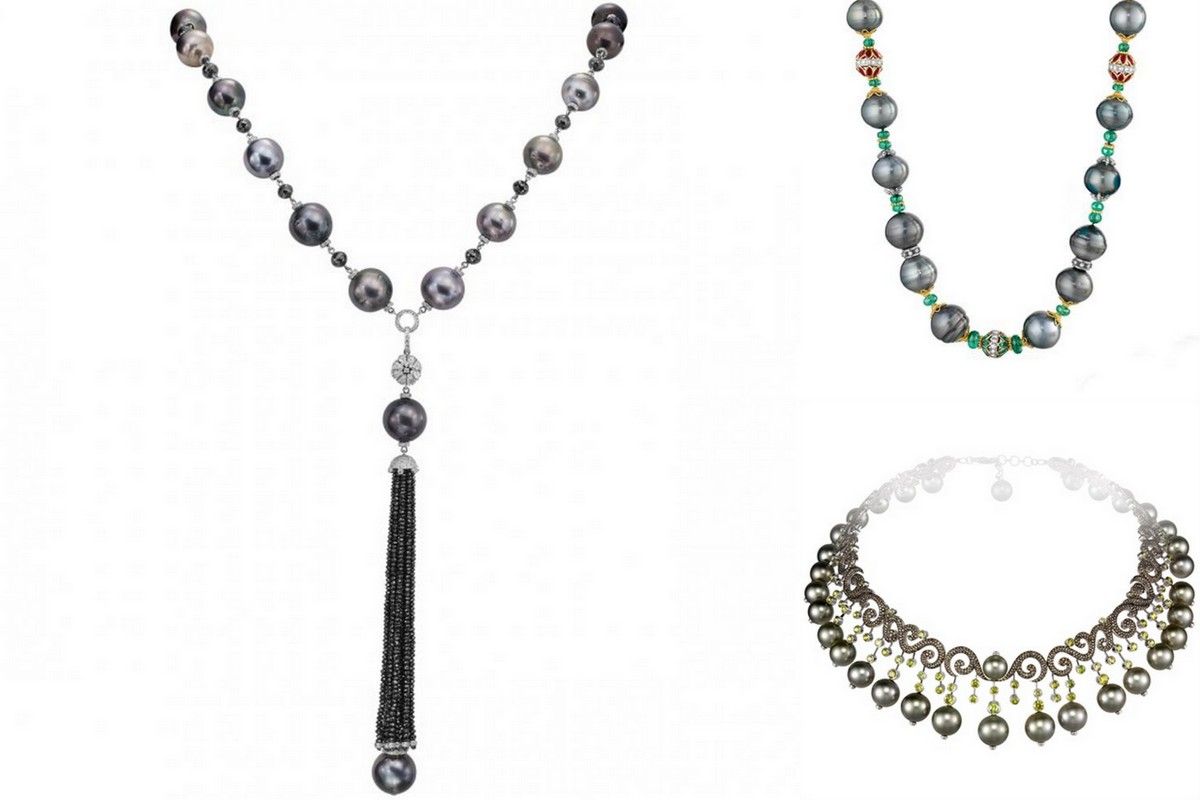 Rina Limor, Verdura and Chopard...each amazing in their own way

Schoeffel, Evelyn Huang's Ocean Lullaby ( she has won an award with this ring) and Autore. 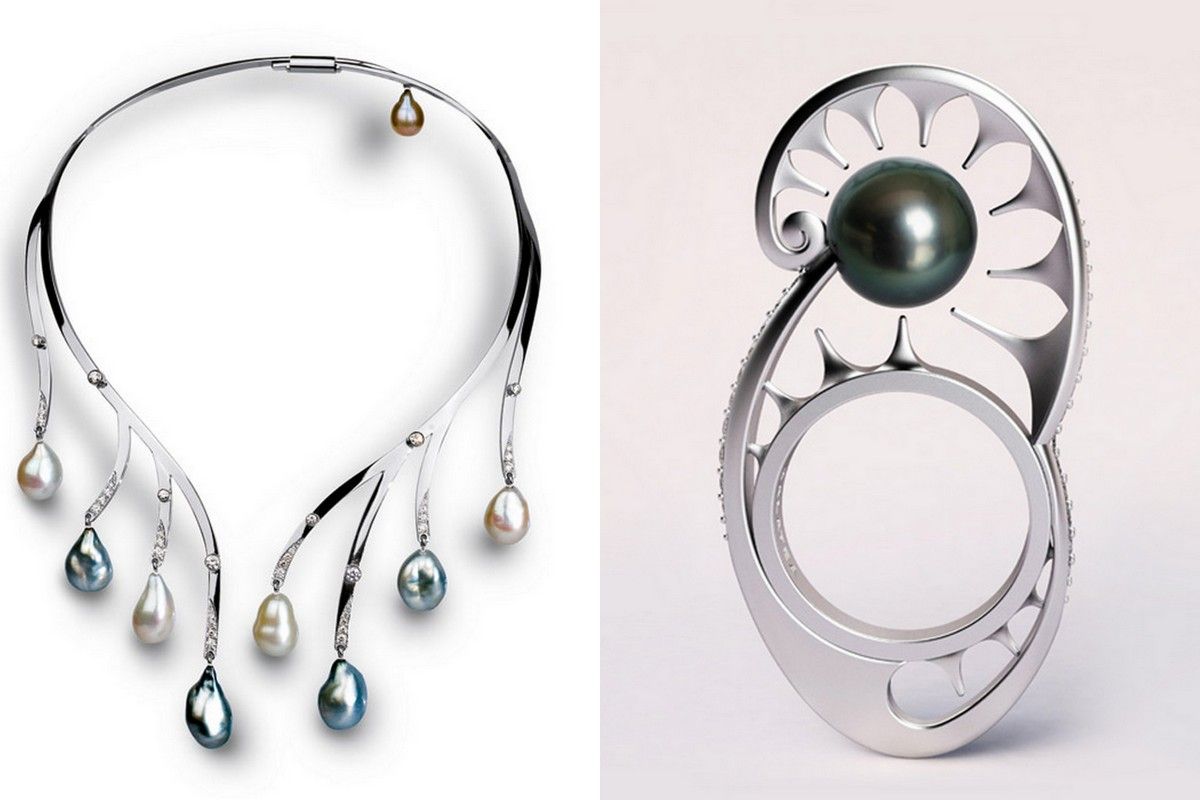