10 fun facts about van Cleef & Arpels that you did not know! 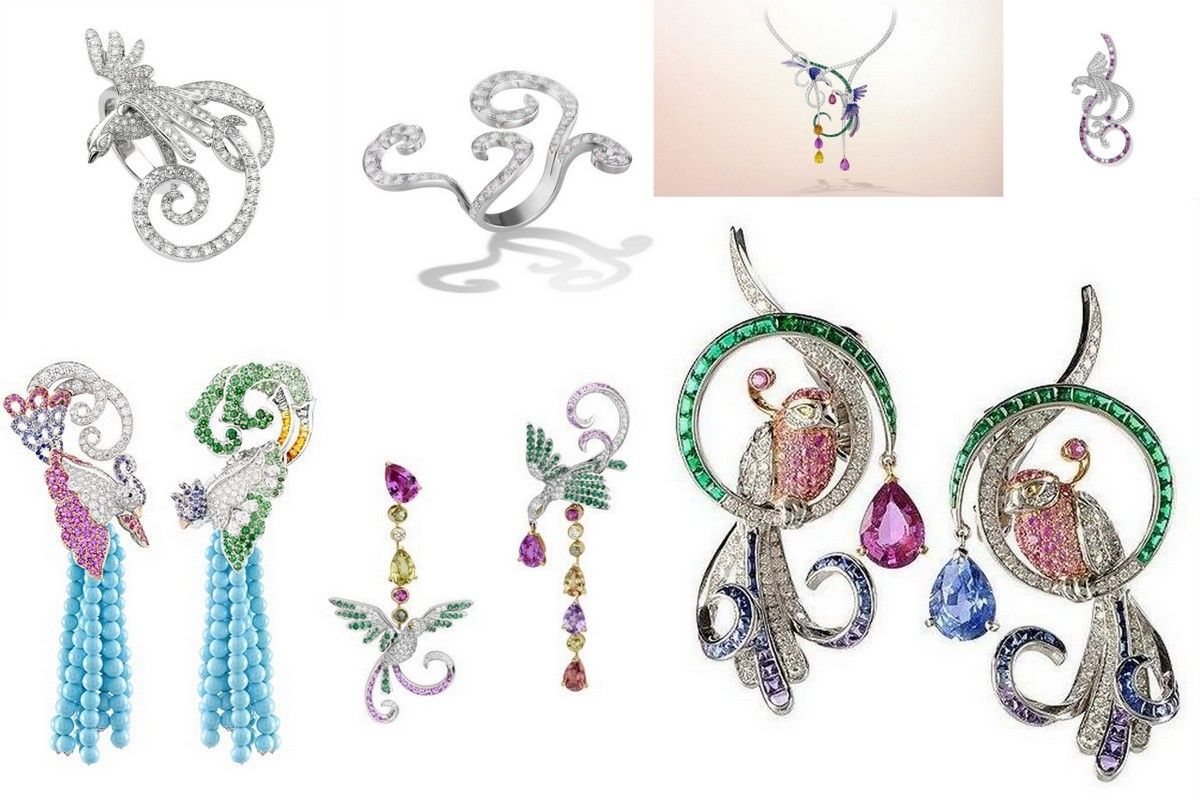 Beautiful fine jewelry by Van Cleef & Arpels from the Oiseaux de Paradis collection. I personally love this collection so much as it is frivolous, light and playful. Although I can admire an important classical piece, I am much more attracted to the playful side of jewelry. And Van Cleef & Arpels are truly magnificent in capturing the beauty and playfulness of the birds here.

It all started with the marriage of Estelle Arpels and Alfred van Cleef in 1895. In 1906 they started to work under the name: Van Cleef & Arpels. And still today, even for those who are not so much familiar with the world of jewelry, it is a household name. 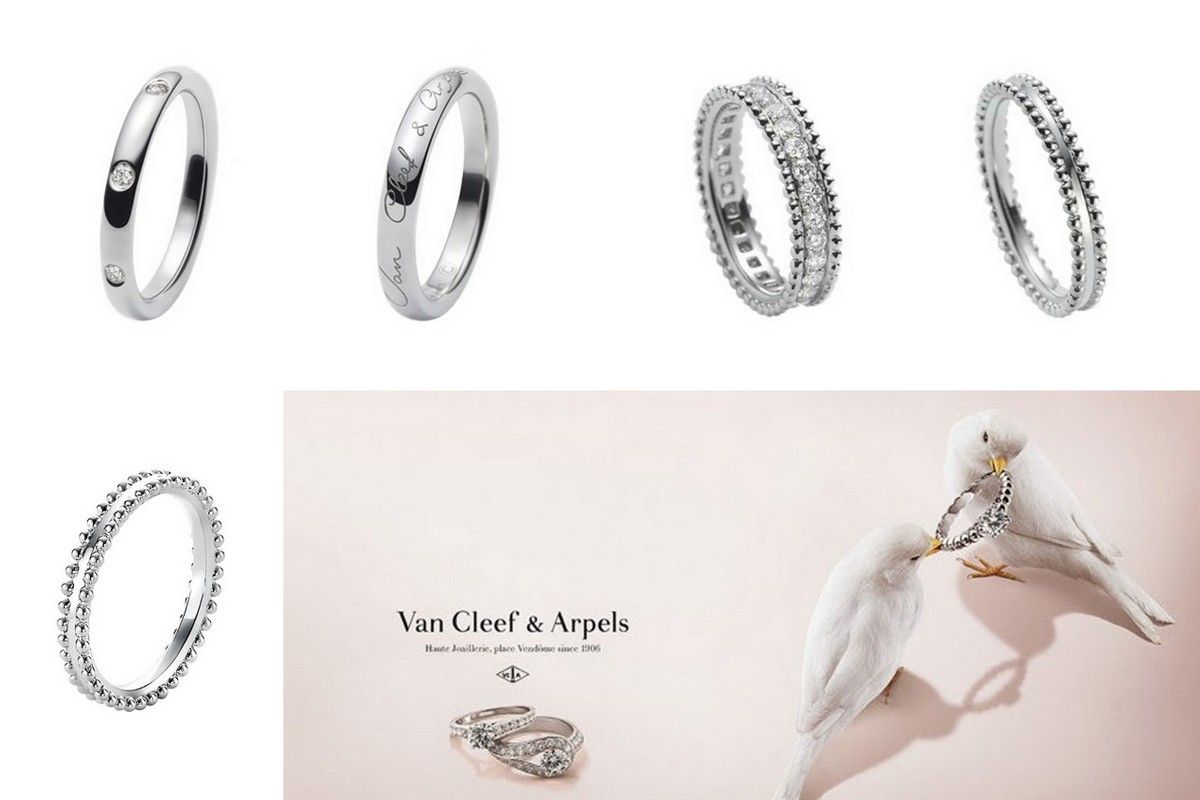 Should you wish to do so: Van Cleef & Arpels have a a wonderful collection of wedding bands and engagement rings

Here are 10 facts you might not know about the brand! 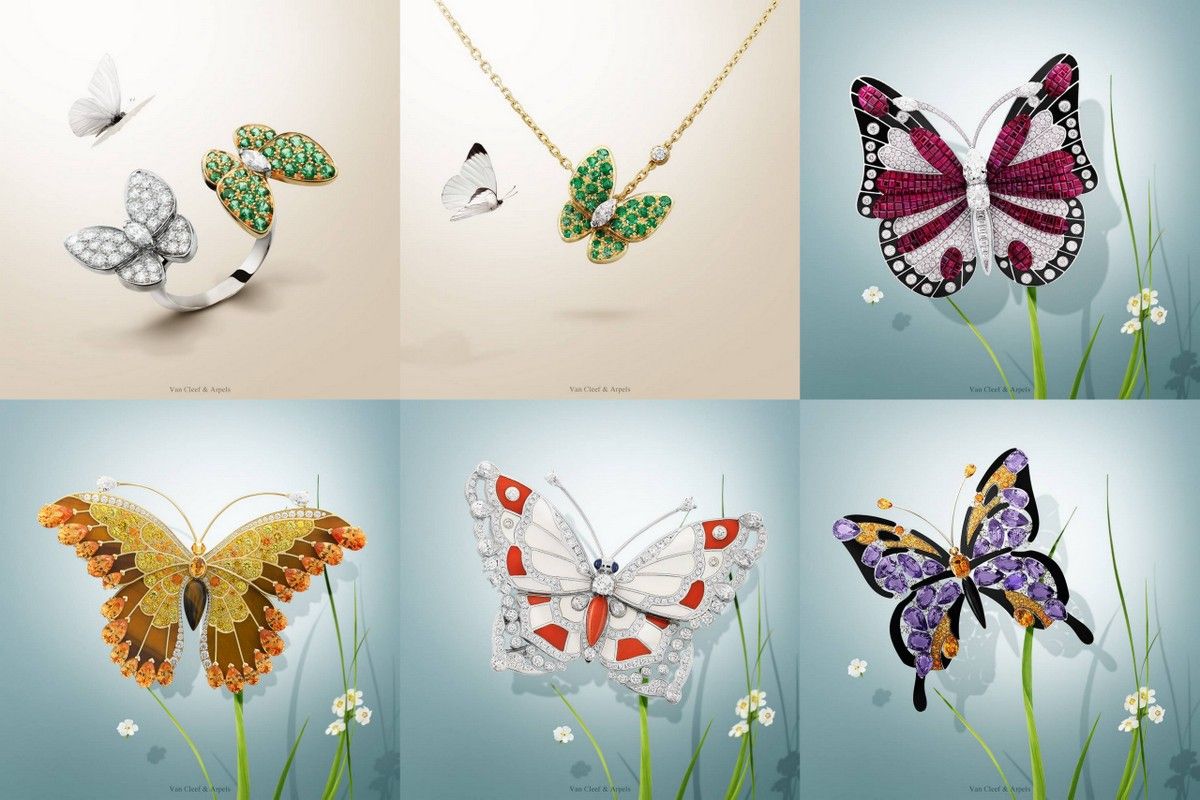 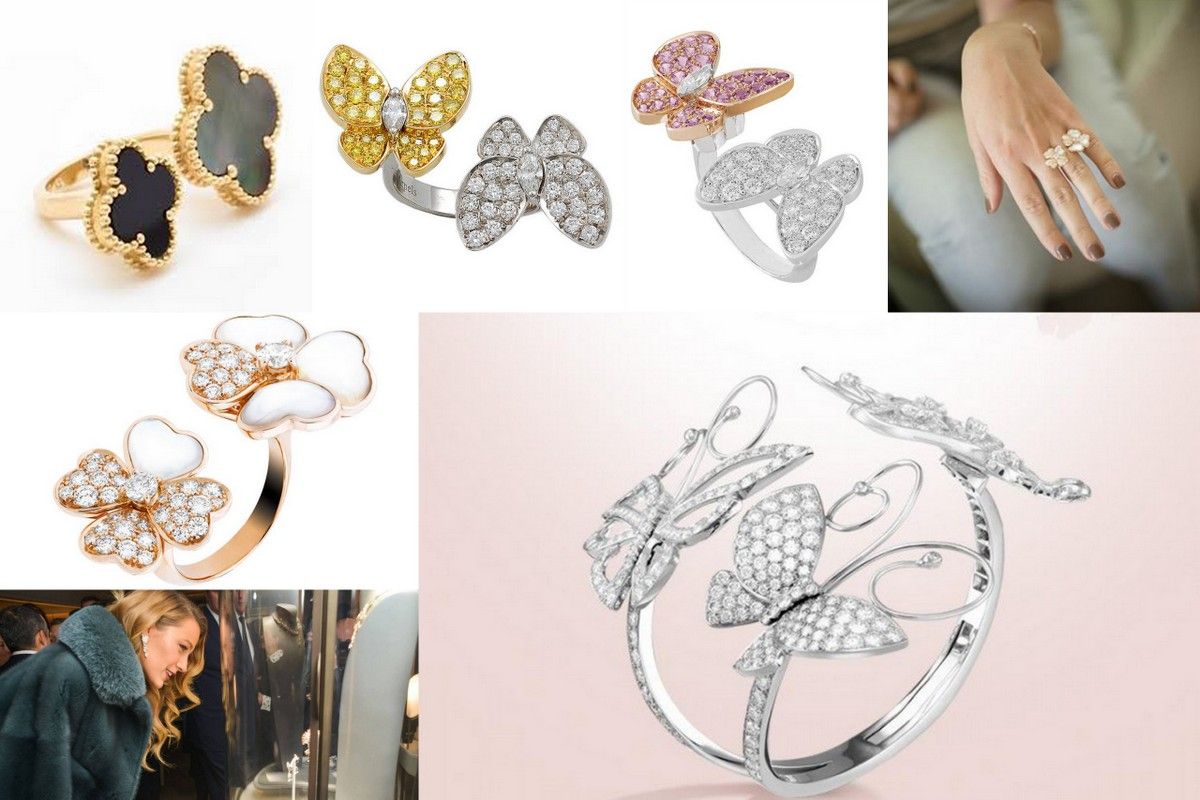 Today these kinds of rings are so much in fashion. I love them; ''the between the finger rings'' Hopefully we will see many more developements in how jewelry can evolve and how its worn. As we get more and more influences from abroad, we see so many new things that will eventually influence our fashion sense and taste. 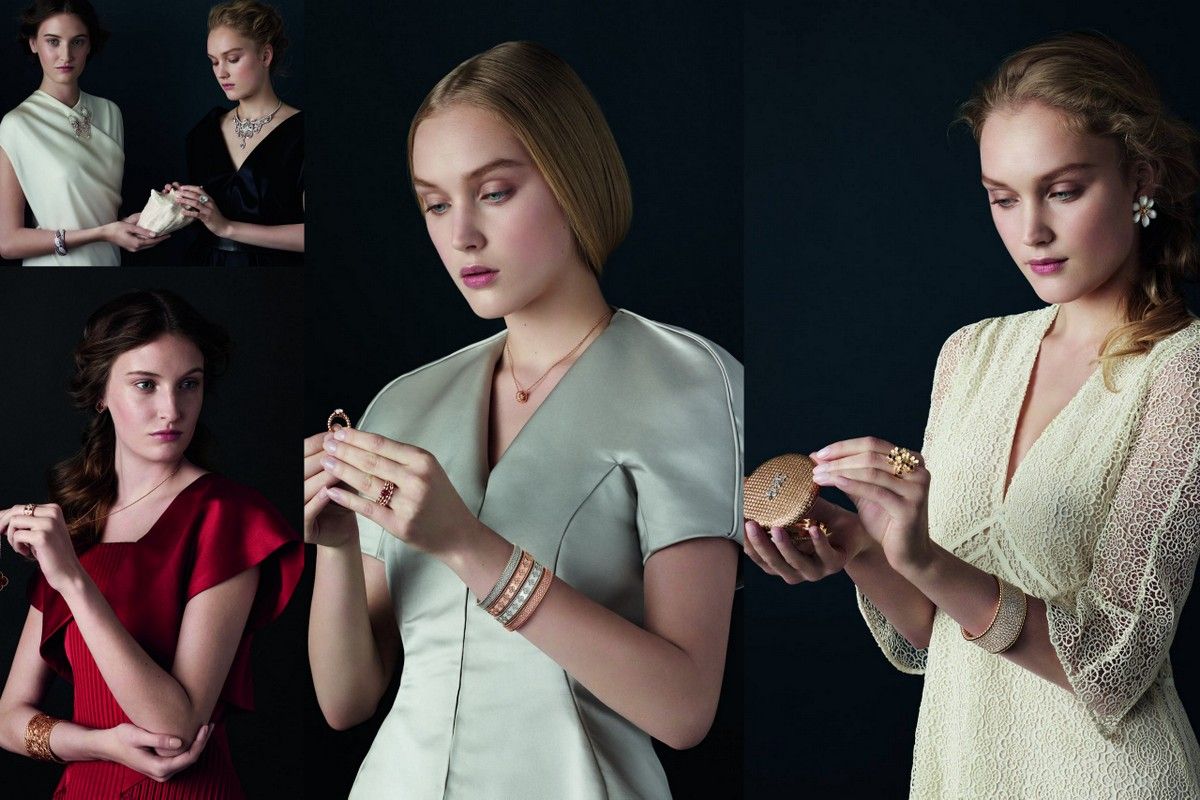 Pureness, clean...almost like a painting from the Rijksmuseum! These photo's give you an idea of how van Cleef & Arpels sees its jewelry. If I should make one remark...and I want to ;-) : I miss photo's of the clientele that most probably buys more jewelry than the beautiful ladies in this picture. I miss the 30 somethings and the 40 somethings and the generation after that too....But I do get the idea here of creating a classical painting almost.

3. Forbes called the Pierre Arpels watch: *the pink shirt of watches*. This watch, designed by Pierre in 1949, had the purpose of being easy to pull in and out a shirt, as it was so thin. Van Cleef & Arpels are more famous for their high end jewelry watches for ladies. But the in 1971 commercialized version of the Pierre Arpels watch is still stunning today and easy to wear and very elegant. 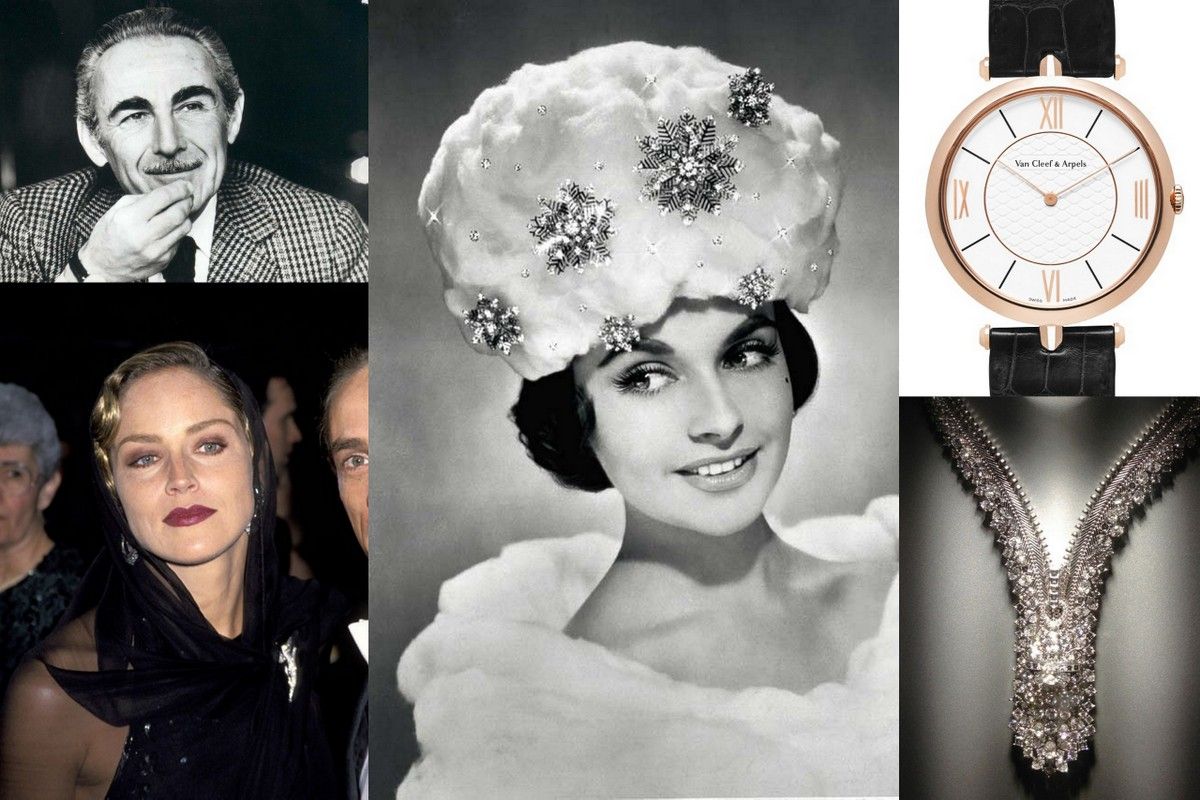 Pierre Arpels, wearing the watch he designed for himself. So sleek and flat that it would just easily pop out from his sleeve, when he needed it. The watch has been commercialized in 1971. Some claim it to be not very manly. But maybe it takes a real man to pull off something this sleek and elegant ;-) The Zip collier is one of the most famous and talked about pieces of jewelry in history. Created for Wallis Simpson, it is a true piece of technical intelligence and utter craftsmanship. The image in the middle is an old beautiful one from Van Cleef & Arpels. And Sharon Stone wore a ballerina brooch from 1955 to the Acadamy Awards in the mid-nineties.

4. Van Cleef & Arpels invented the minaudière. This was a little vanity case in gold and or silver and enamel. The case was inspired by  Frances Gould.  Minaudière is a homage to the wife or Alfred…Estelle was famous for her smile and the minaudière is a reference to that famous simpering smile.

The Minaudière by Van Cleef & Arpels. I love these treasures that are related to the jewelry industry, but yet aren't jewelry to be worn. Pens, cigar holders, lighter, combs and what else...if these objects are the subject of a master jeweler, transforming them into the most gracious and most amazing pieces, I am in awe...always.

5. Richemont is owner of Van Cleef & Arpels. This group, established in 1988, bought 60% in 1999. Later they gained more and so Van Cleef & Arpels is now belonging to the group that has Cartier, Net-a Porter, IWC, Piaget, Montblanc, Jaeger LeCoultre, Panerai,Chloe, Roger Dubuis, Vacheron Constatin, Baume et Mercier and so many other luxury brands in its portfolio

6. Van Cleef & Arpels are the  owner of the patent for the Mystery Setting. This setting was invented within the company and patented in 1933. Still today an amazing craftsmanship and special skilss are needed to be able to create a piece with a mystery setting. Not something every bench jeweler can actually make. 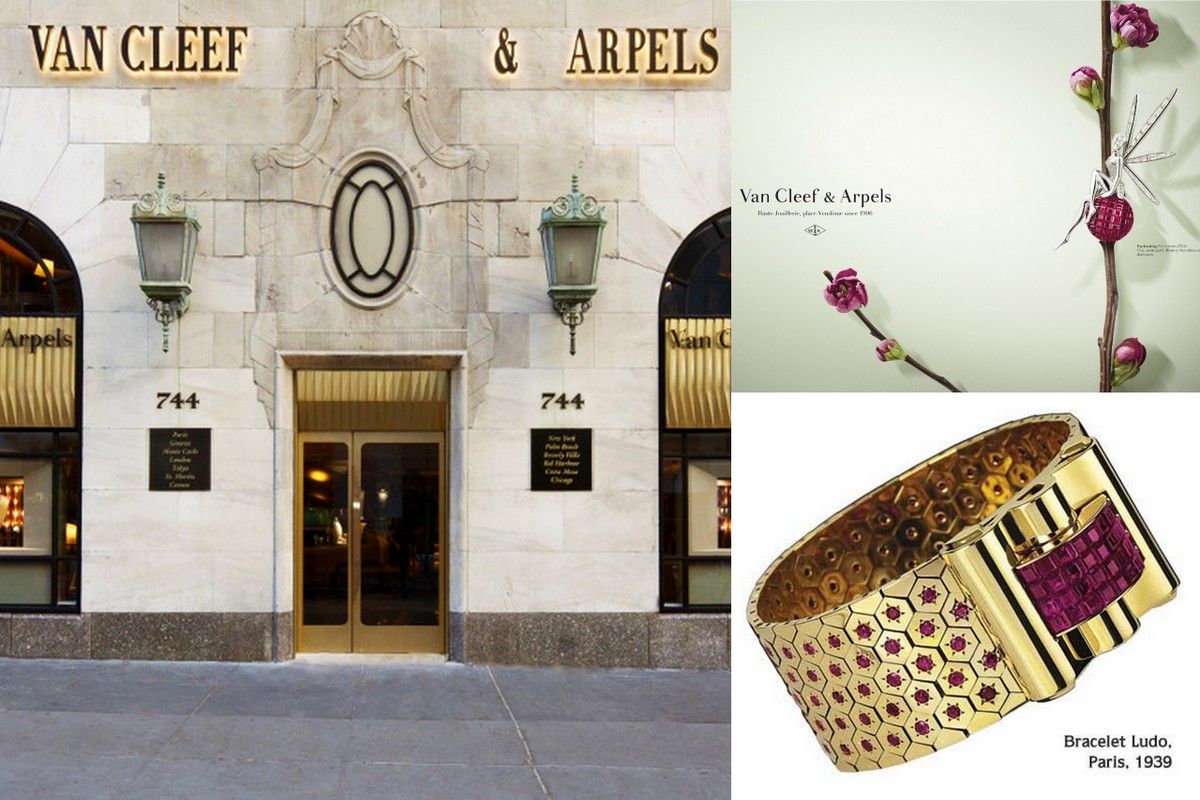 xamples of the mystery setting. so beautiful!

7. Did you know you can create your own 8 second video, sending love and luck to someone, created by Van Cleef & Arpels? Ever so cute! http://8-seconds-of-luck.vancleefarpels.com/

8. The four-leaf clover shape emblematic of the collection is inspired by Jacques Arpels, who collected four-leaf clovers in his garden and presented them to his staff, along with a poem he had chosen. He meant the gesture as a reminder to be always hopeful. I like that! 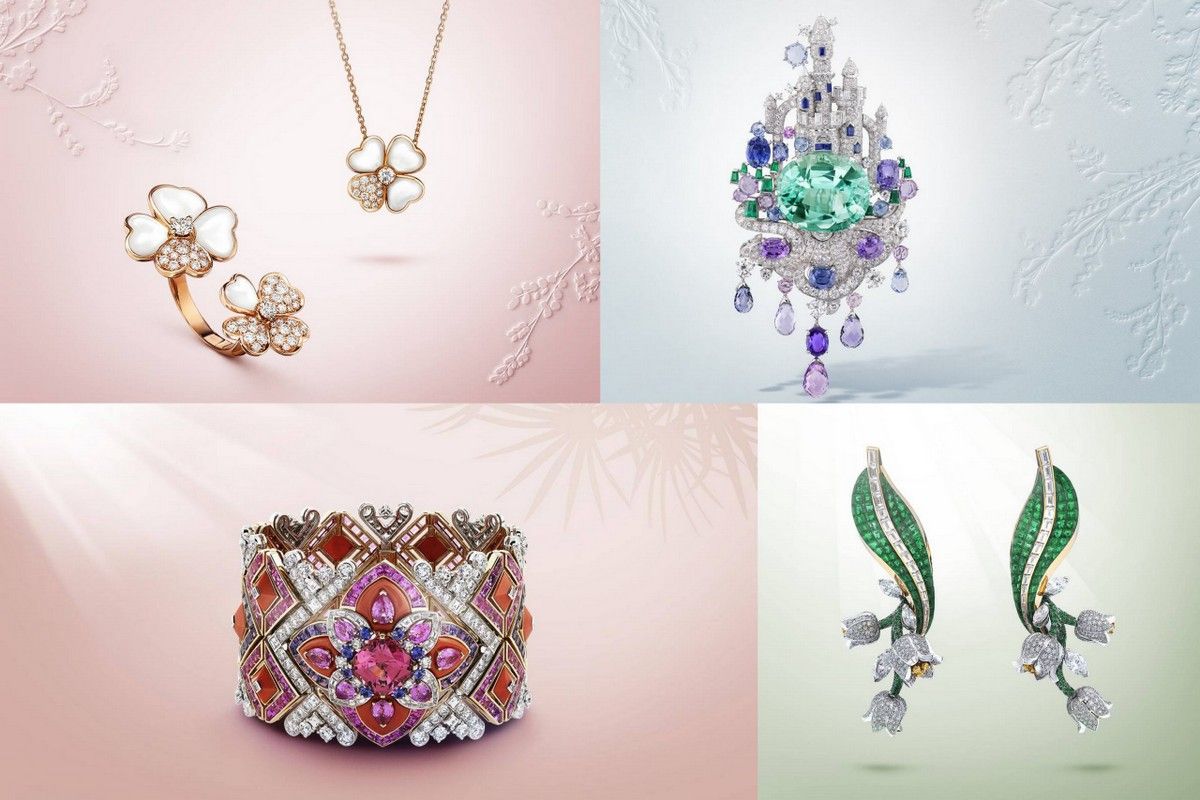 9. 2900 hours were necessary for the Mains d’Or ™ to manufacture this piece of a remarkable flexibility, allowing to wear it at several levels, from the wrist to the forearm. Entirely made of white gold and adorned with a purple tourmaline of 12,39 carats, diamonds, colored sapphires, tsavorite, Mandarin and demantoid garnets, red             spinels and turquoise, the Naga decor bracelet symbolizes a mythical creature from Cambodian tales and legends. This creature often represented with a stone on the head is the guardian of the vital energy of the oceans. Just look at all the details and imagine what skills one must have on so many levels! 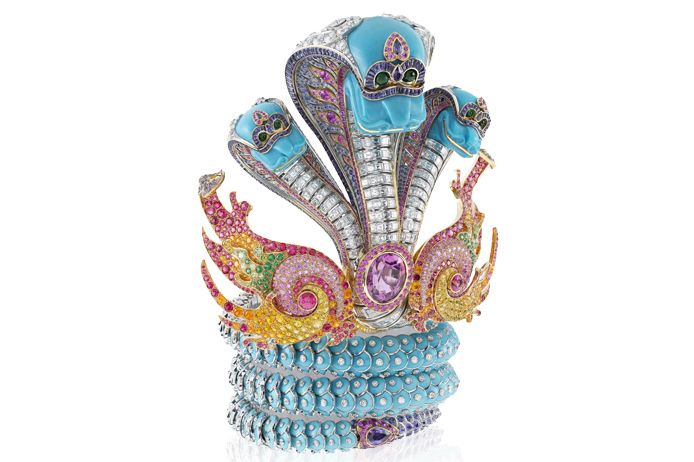 10. Van Cleef & Arpels revealed a very new collection this month of high end jewelry? Called the SEVEN SEAS. Below you can enjoy the beauty of all the seven seas collection: 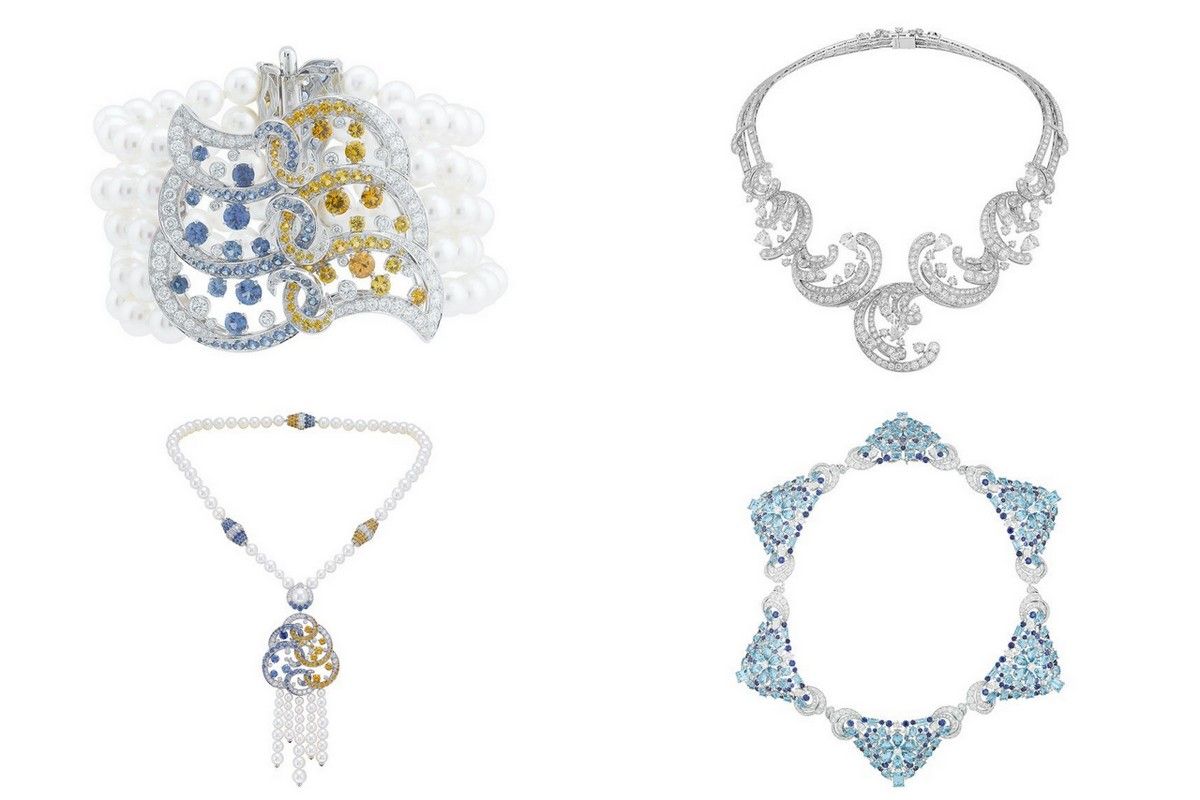 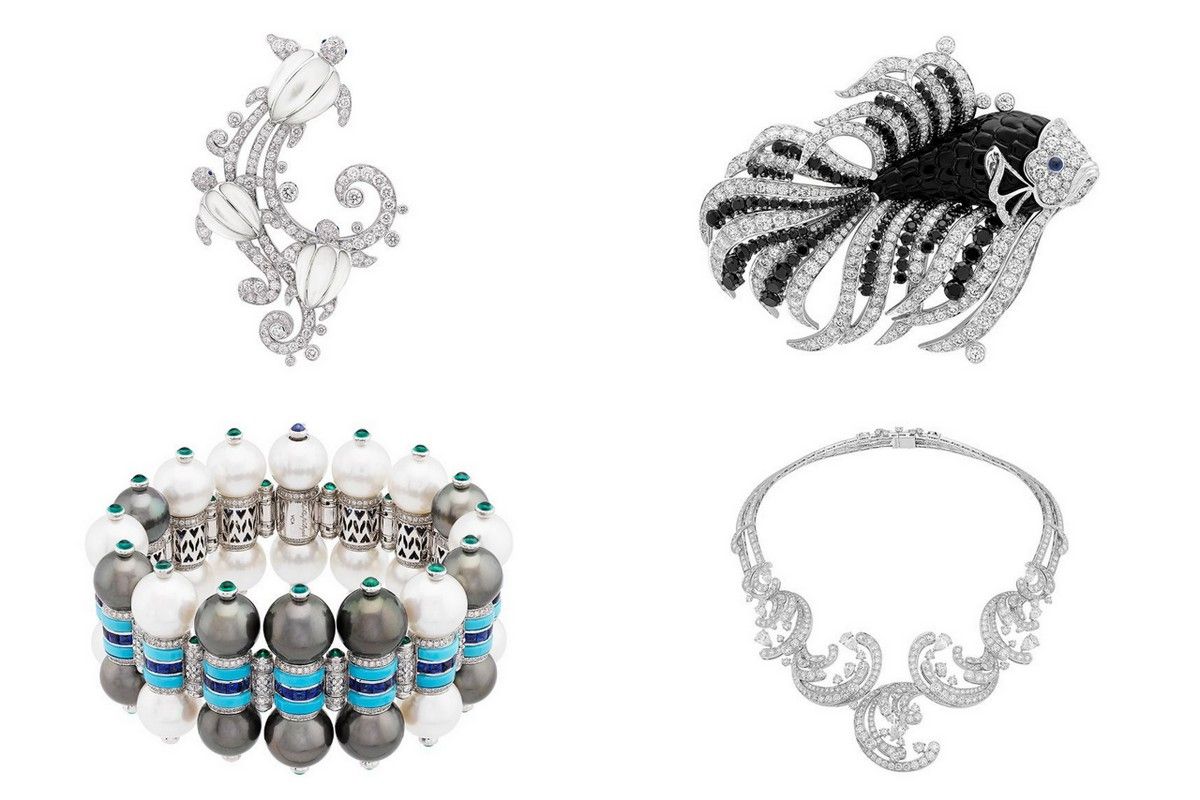 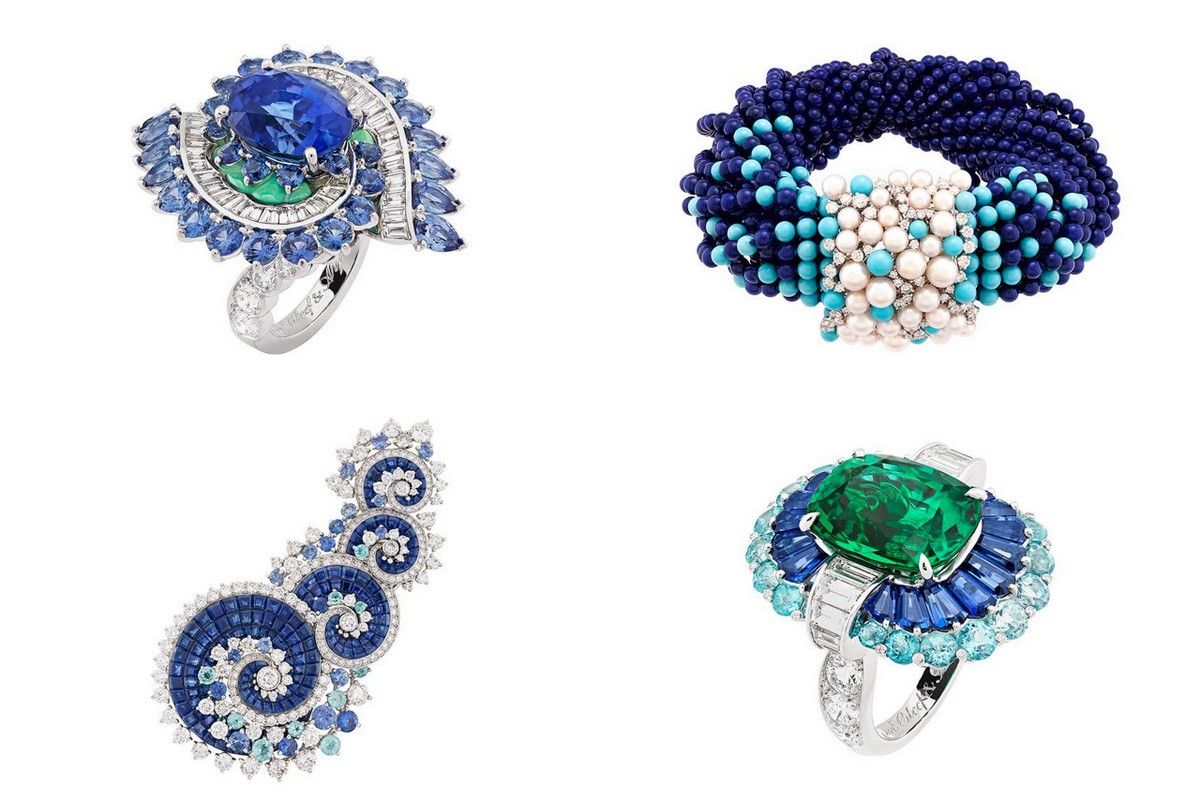 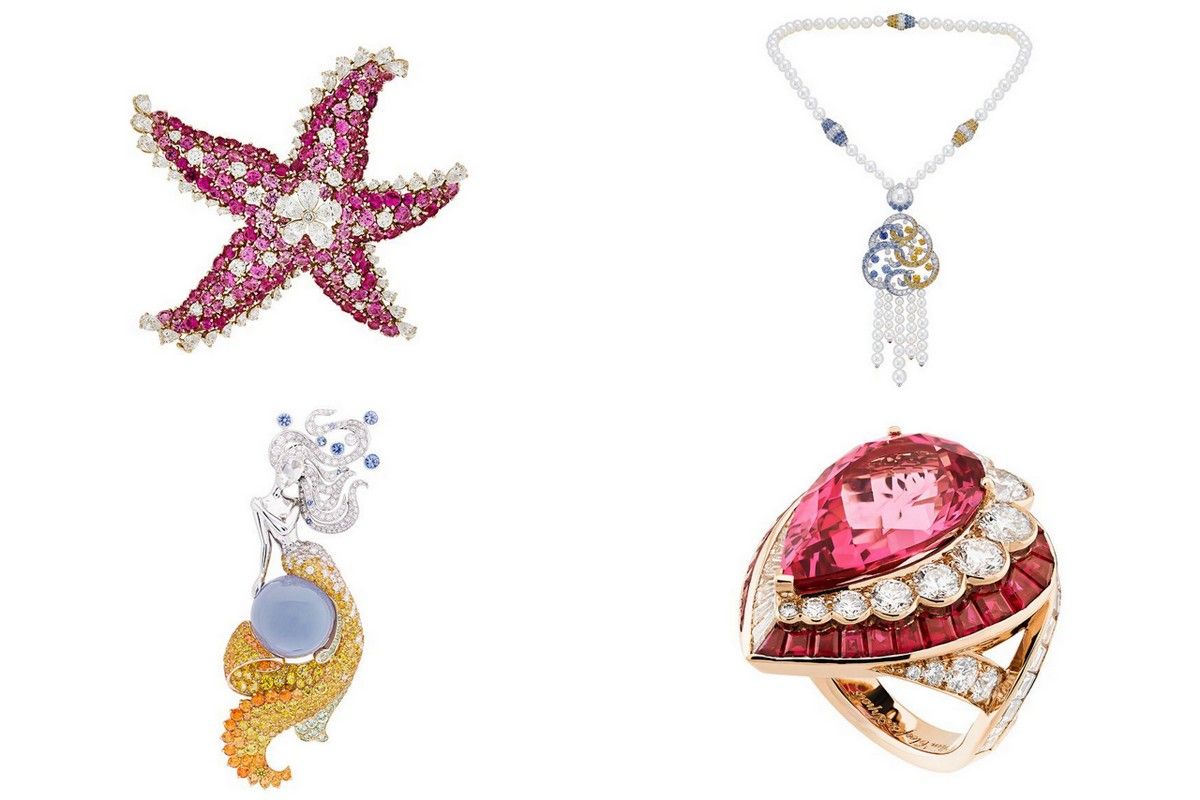 All pieces from the SEVEN SEAS collection, presented this month!  Although I almost always favor a piece with an animal or something;-) this time I must admit that I am in LOVE with that pearl bracelet! If you like to know all the details from the pieces, please visit the website of Van Cleef & Arpels. These are all high end jewerly pieces and therefor come with a certain cost. Is Van Cleef & Arpels worth it? I would say, without a doubt: Yes...it always is worth, should you be able to afford it, to invest in a piece of jewelry by Van Cleef & Arpels. But most of all, jewelry that is extremely well made, with stunning design and the best possible materials, is jewelry that one will never ever regret to have spend money on. You will be able to enjoy it for the rest of your life and pass it on to the next generation who will be able to enjoy it themselves and perhaps pass it on too. Should it ever come to that: they maintain a certain value over time, so at an auction or something, they will have the added value of their beauty and quality, as well as the name Van Cleef & Arpels.
Tags
animals, birds, Colorful, High end Jewellery