Magical Jewelry from the sea

Miles from land and deep into the ocean lives a completely different reality. This is the abyss, a world that we know so little about, yet in our fantasy, we imagine the fiercest, largest and perhaps scariest creatures living there. And we are not wrong. Some of the animals living here have evolved the ability to create their own light with a technique known as bioluminescence. Others have grown to gigantic proportions, with even more gigantic creatures, such as the sperm whale.

This alien world of wonders have inspired us creating stories, books and art. This world of wonders is also an endless inspiration for the creators of fantastic jewelry. Jewelry inspired by the ocean myths and wonders, that’s the world we would love to drag you into, in this blog. 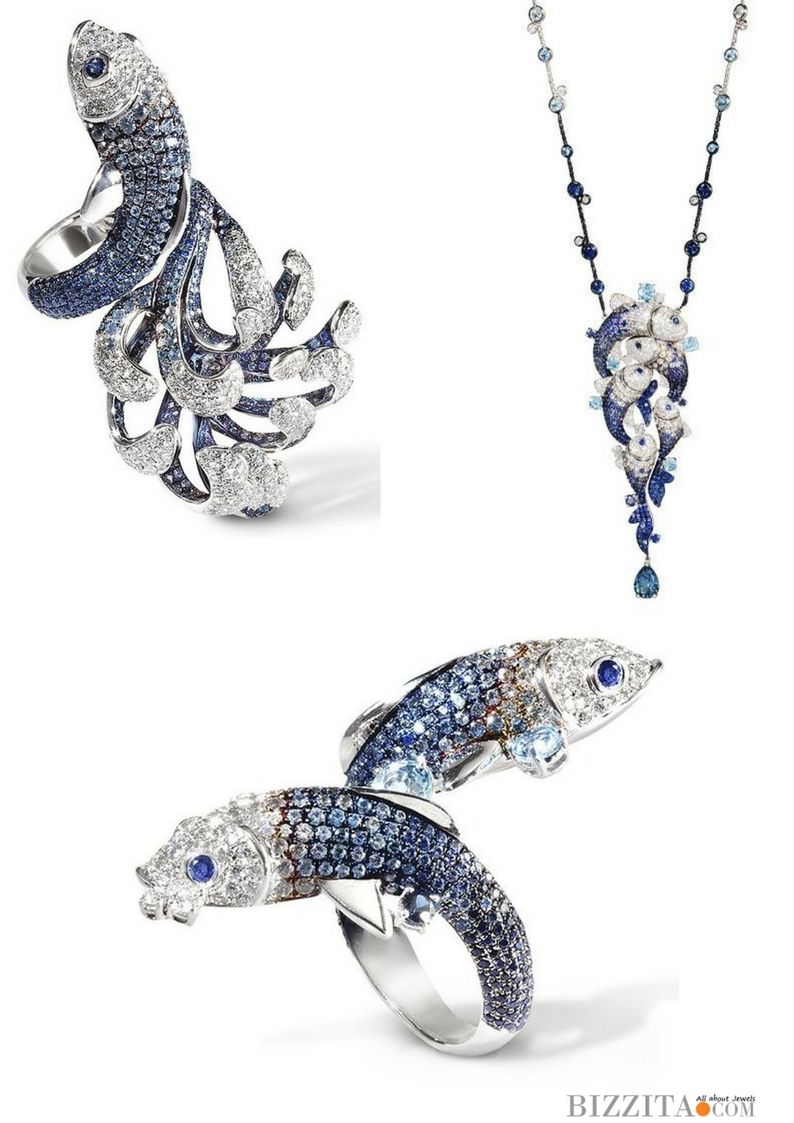 Armaggan Pearl Mullet Rings and necklace. This collection is inspired by the actual pearl mullet that lives in the salty and mineral waters of Lake Van

The Ocean filled with sea creatures

I grew up with the documentaries of Jacques Cousteau, who was a master in storytelling. Today, I love to watch all kinds of documentaries about the wonders of the ocean, together with my son, who seems to be just as taken by the breathtaking beauty of nature, as I am.

Although nature surprises us more than enough with colors and various adaptations of animals and plants in order to survive and thus creating better chances of survival of the species, it seems that we never stopped fantasizing. 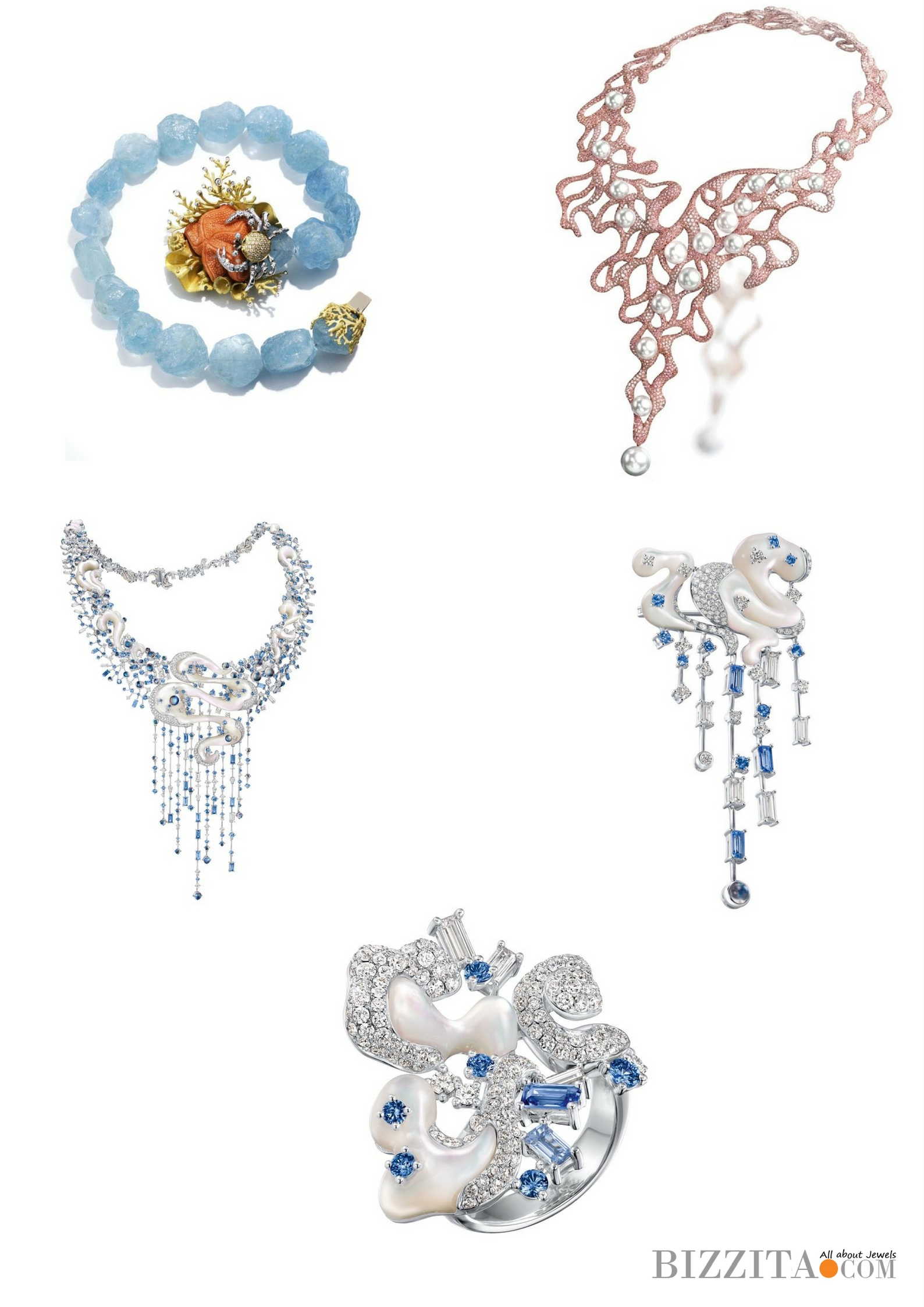 Chow Tai Fook Nimbus Ring, Necklace and Brooch with Mother of Pearl Moonstones, diamonds sapphires. Above the Schoeffel necklace with pearls and the necklace by the Sicilian Massimo Izzo in raw aquamarine from the collection: Jewels of the sea.

Just think about the stunning octopus, still suffering somewhat today from a bad reputation. Created perhaps already at the time of the myth of Hercules fighting a hydra in Greek mythology. The hydra may have been fictional, but it’s living relative is, indeed the octopus. Some call it the devil fish and there are enough B-movies created around this intelligent creature. Luckily, the artists working in jewelry never depicted this animal as scary, evil or mischievous. They always used the grace and beauty of the animal, creating stunning effects with its tentacles. 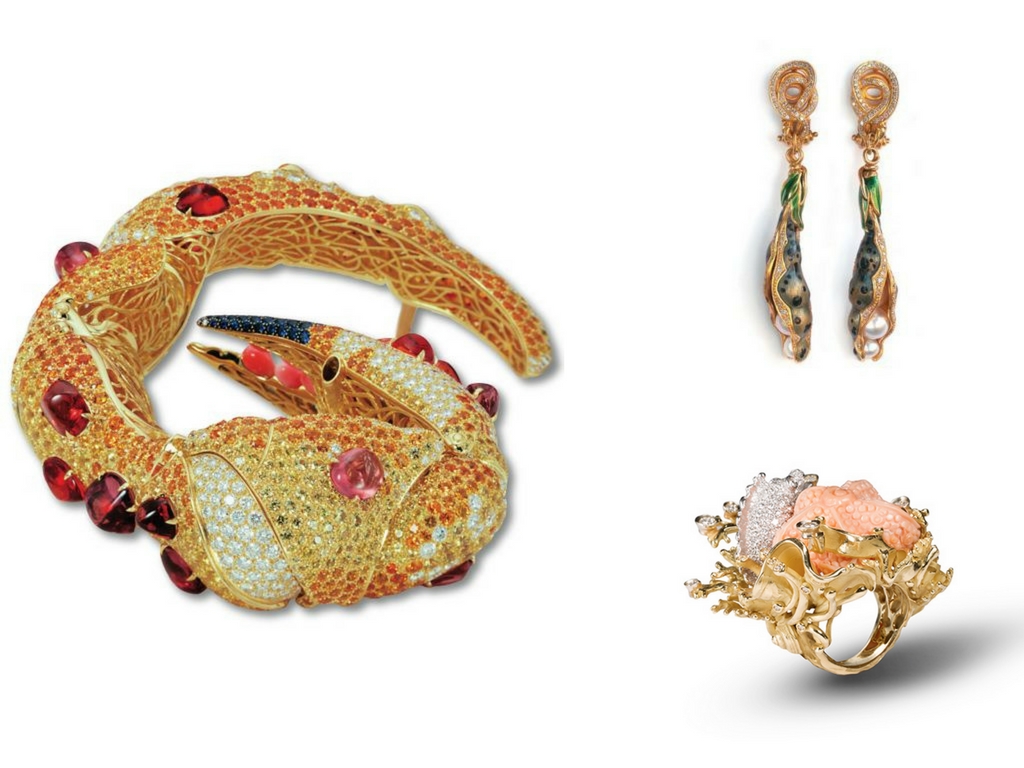 Did you know that for centuries, fossilized shark teeth were believed to be tongues of serpents? Turned into stone by St. Paul and were called glossopetrae, or in English: tongue stones?Basking sharks, the second largest fish ( the biggest is the whale shark) has been often mistaken, especially when found dead, for a terrible sea monster. But sometimes the supernatural is, in fact, a sign of something very real. 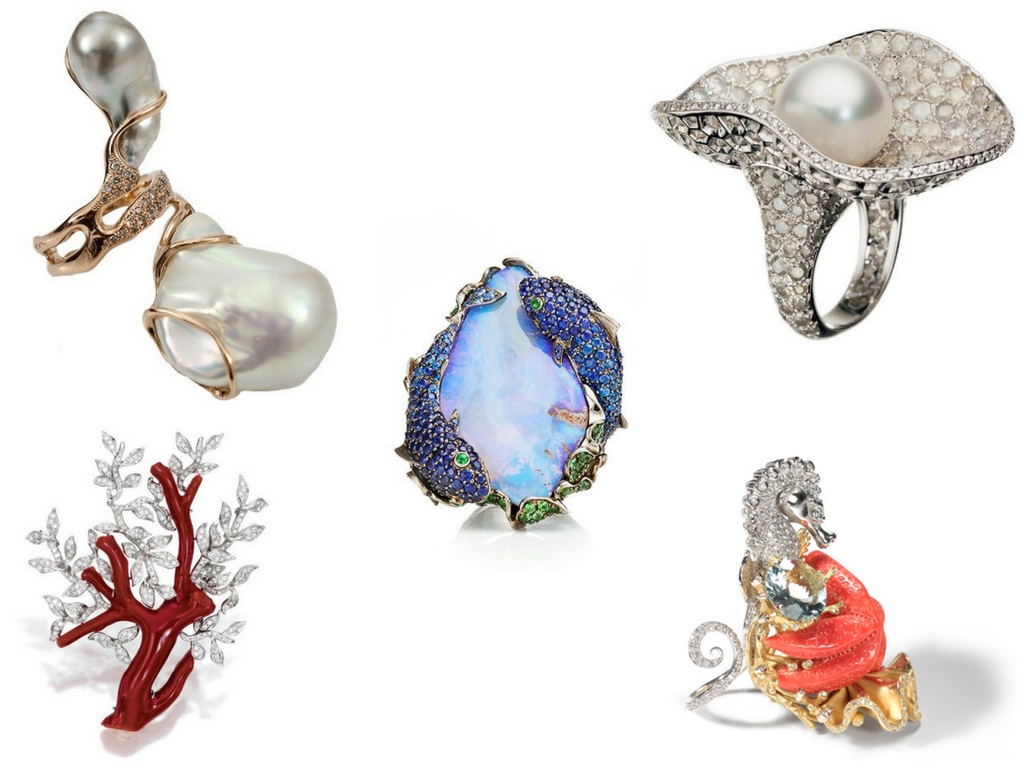 Ring by Federica Rettore: Two if by Sea, with a double baroque set of pearls. In the middle: Lydia Courteille, the magnificent ring above right is by de Grisogono, the brooch below is by Sifen Chang in 18kt white gold and diamonds and coral. And the beautiful ring with seahorse is by Massimo Izzo

There have been many reports about unusual creatures. And these sightings took place just before a storm at sea. But what happens is that the air of two different temperatures can form layers just above the surface of the sea. This creates the effect of different density of these layers. The light bounces and creates a kind of mirage almost. Object appear elongated and out of proportion. Think about seeing a whale or another creature under these conditions, thin, tall and completely weird looking. I can only imagine what a sight that must have been and how this could confirm the strong and popular belief in sea monsters. It was seen as these monsters were a sign of a storm coming and that was actually very accurate! 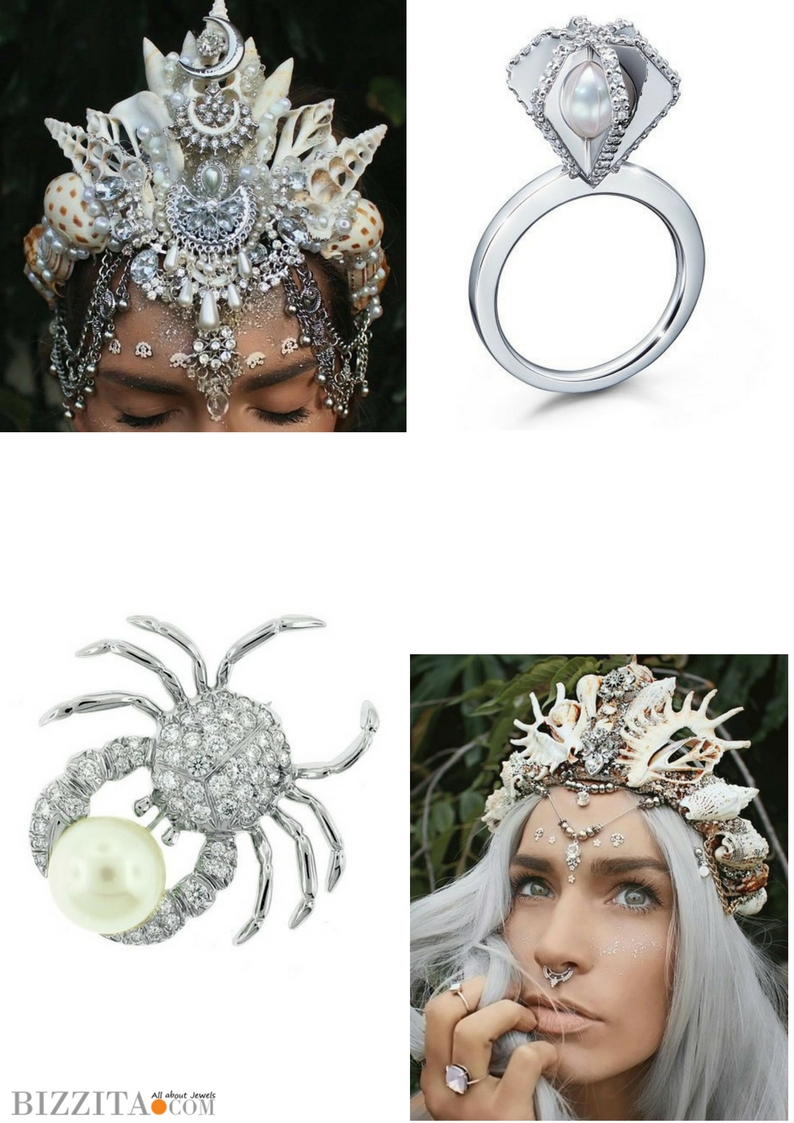 Chelsea Shiels creates fantasies to wear, her wonderful creations can be found on Etsy. The ring with pearl is by Tasaki and the cute crab is by Tiffany & Co

Luckily for us, jewelers all over the world, embraced the more enchanting and less scary side of sea creatures. Sometimes depicting them like they are in real life, sometimes creating a more Disney-like character. The many colors, the reflections of the water and the scale of the fish, the natural resources like pearls and coral, the enormous diversity, it all contributes to a never ending series of fantastic sea creatures themed jewelry.

From simple to extremely artistic, you can surely find the sea creature to suit your personal style! 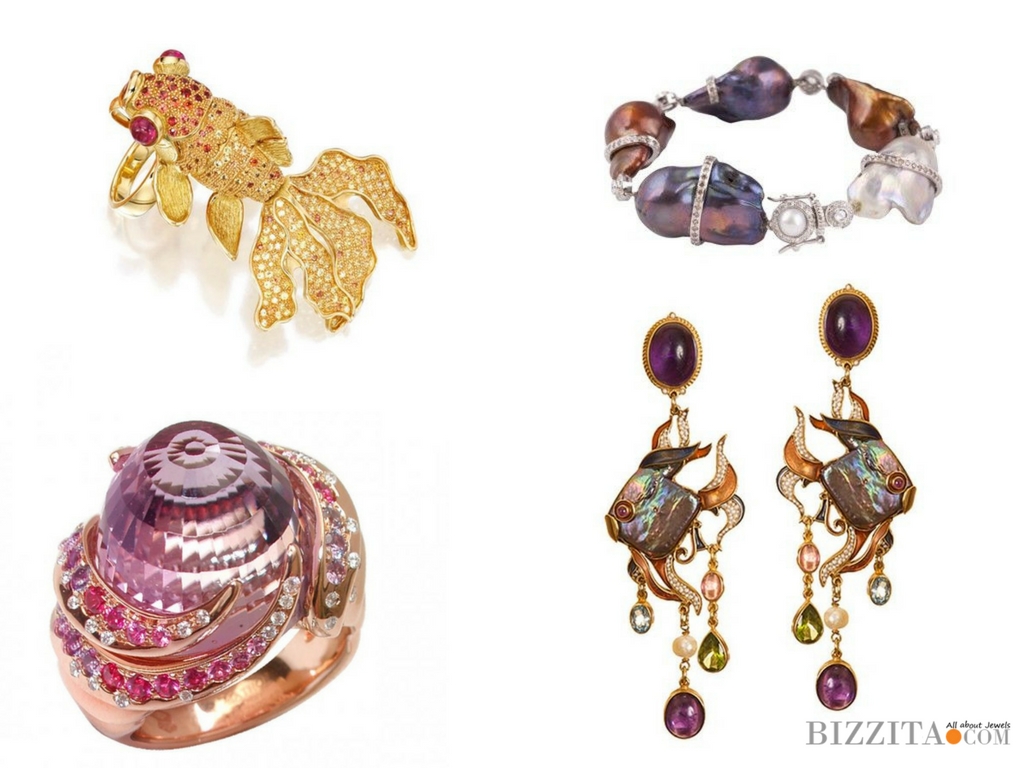 The Lucky Koi ring is by Alexander Laut and created with multi-color sapphire and ruby. StudioTara 'The ocean is all yours' colored baroque pearls with champagne diamonds in white gold. Mathon ring with amethyst, looking like a beautiful shell. The earrings are by Diego Percossi Papi. 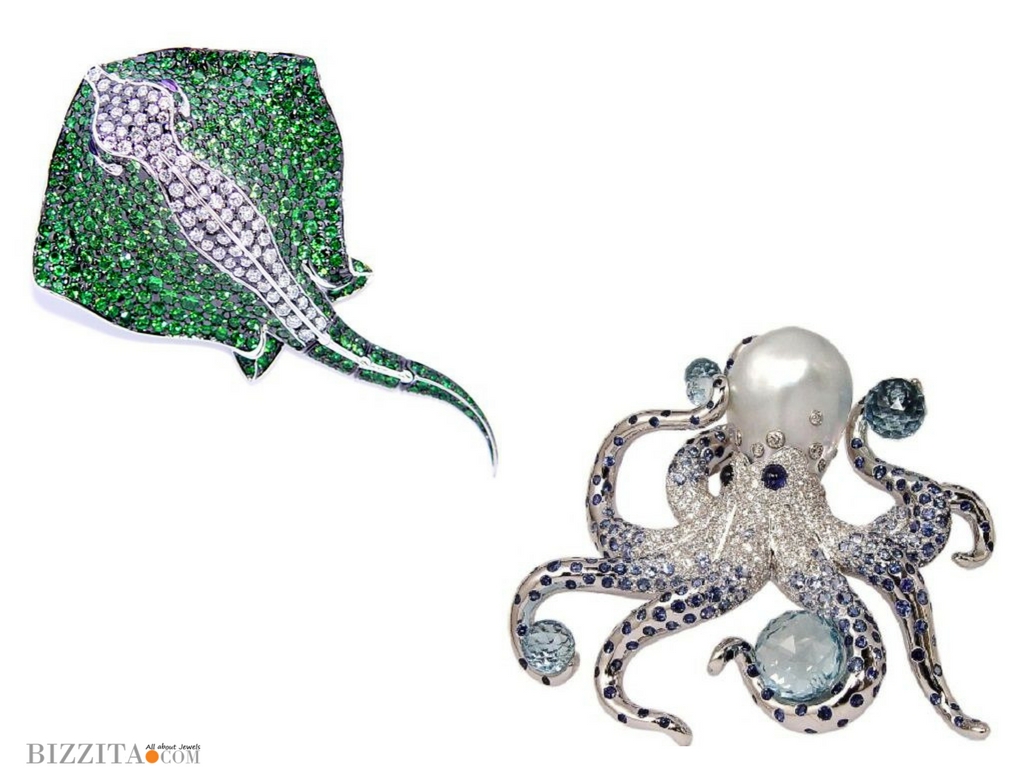 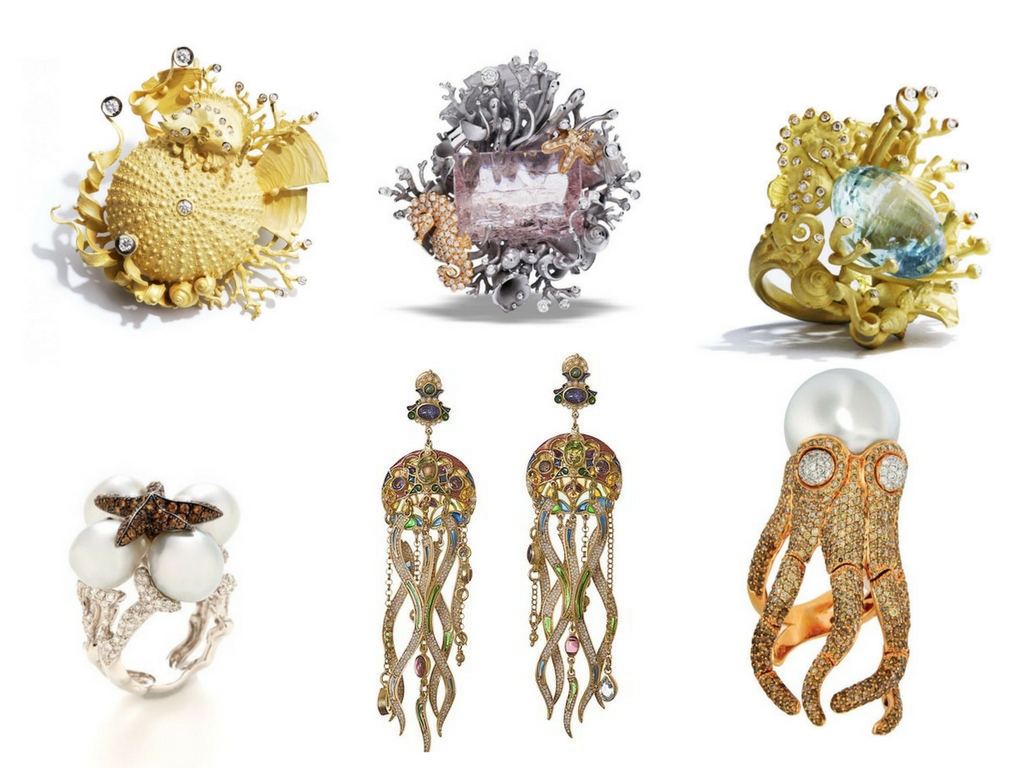 Above all rings by Massimo Izzo, starfish with orange sapphires, pearls and diamonds by Piranesi and earrings by Diego Percossi Papi. That gorgeous ring with the octopus is by Jacob & Co and contains an Australian pearl and cognac & white diamonds 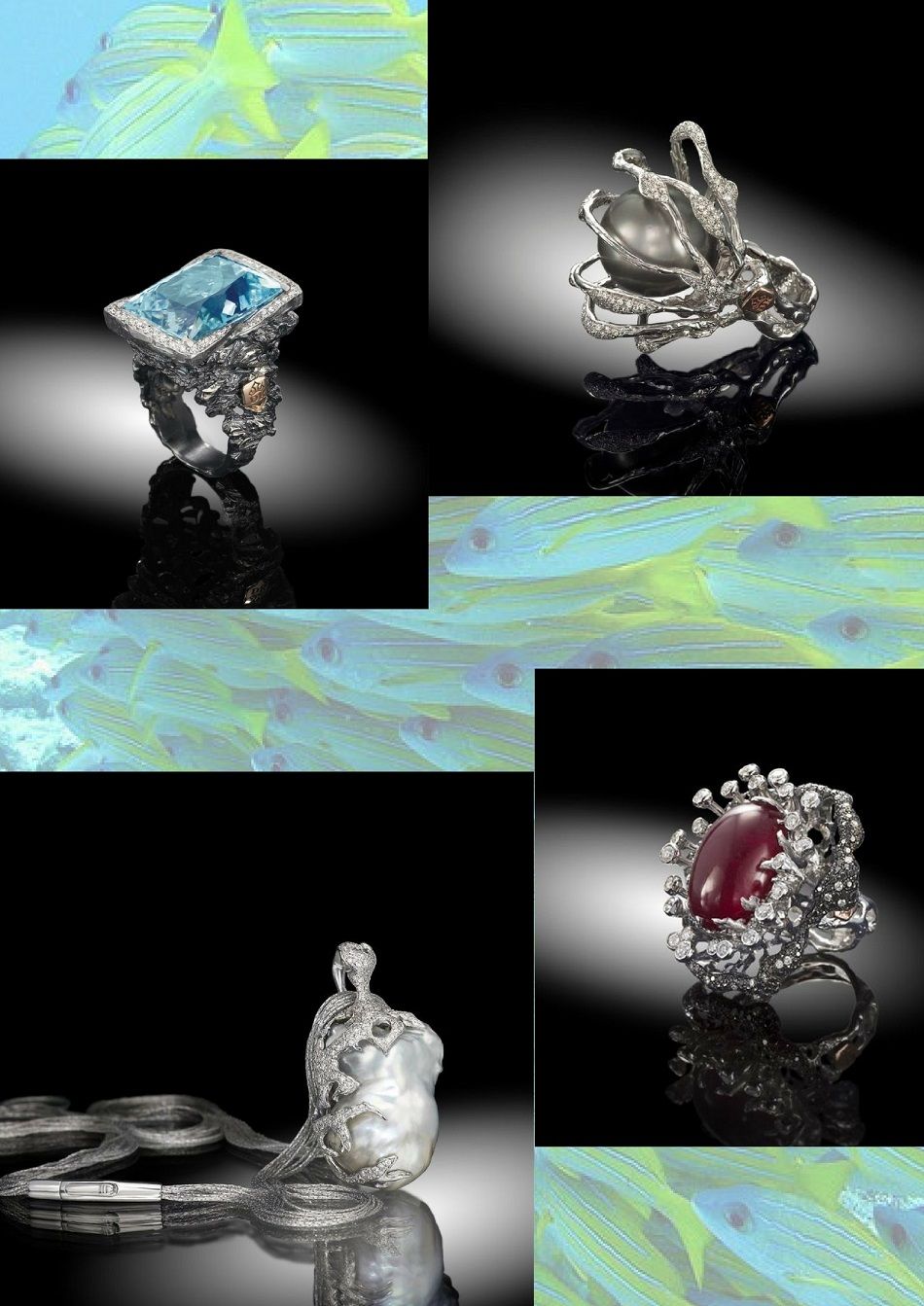 All jewelry is by Dust Kreations 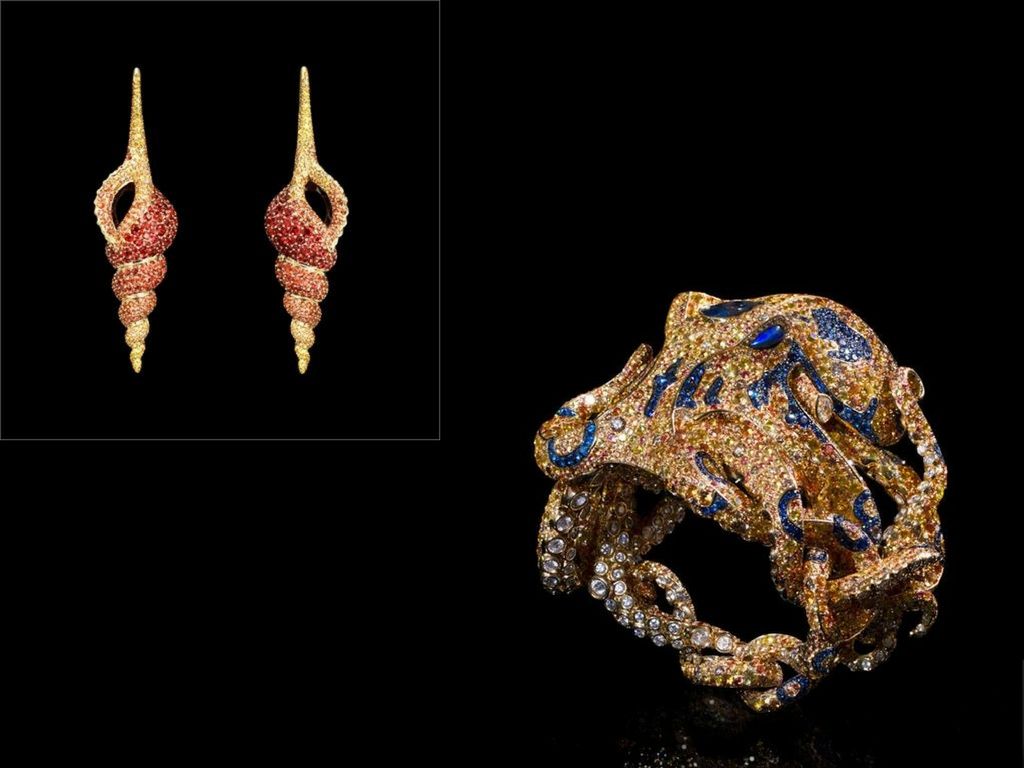