Playful Monkey Jewelry you will LOVE!

Monkeys, we all love them! There is a reason that it’s the most visited attraction of any zoo. Monkeys in jewelry are simply wonderful. They represent a more playful side of ourselves. Perhaps even remind us not taking life and ourselves too seriously at times. Many jewelry brands have created the most cheeky and beautiful monkeys you have ever seen. From the biggest names to the niche designer, they all know how much we love a monkey! 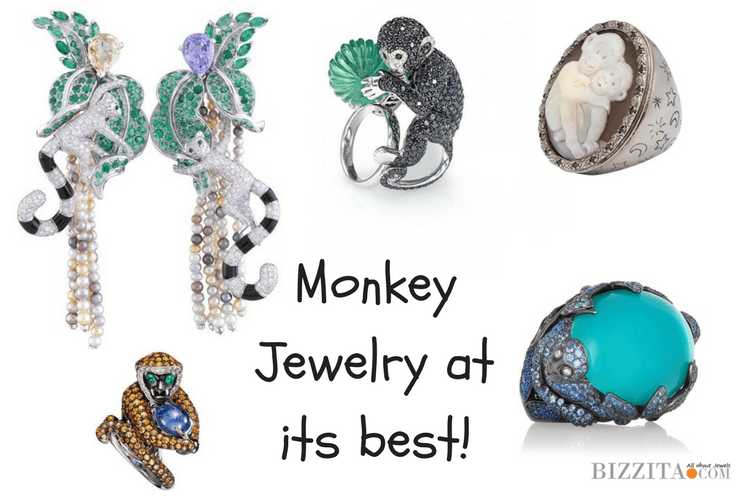 Monkeys remind us of our playful side, someone told me. Whilst I stared through a window, looking at the orange furry creature coming close on the other side of that same window. We only looked briefly into each other’s eyes, but as I held my baby in my arms, so was she. And we just sat there, for minutes. It was the simplest thing, but sheer magic at the same time.

As magic often appears in the most unexpected and rather simple moments of life, the moment I had with the orang-utan is a moment I cherish dearly. 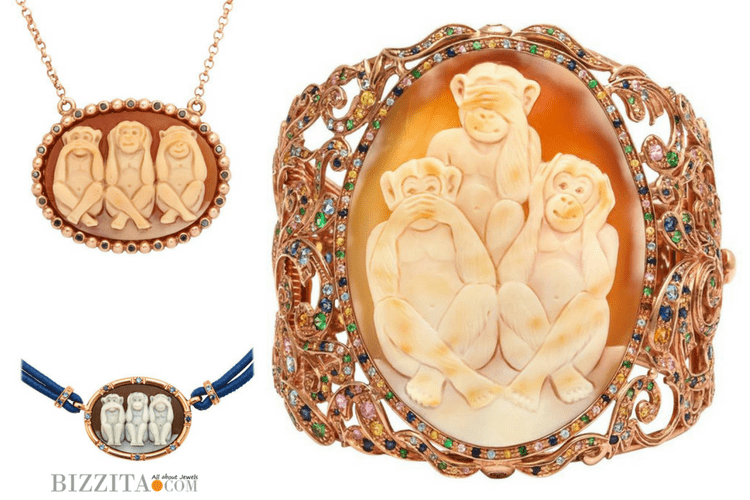 It must be said; I have a fondness for many animals. I am crazy about the weirder creatures such as tapirs and capybaras and belugas. I am fascinated by odd-looking animals like anteaters and armadillos, and I am in love with many of the strangest sea creatures too. Would love to see these more in jewelry, but I fear that's too much of a niche for any jewelry brand!

Monkeys are perhaps the least weird looking creatures. In our eyes.
It’s a little like staring at something so oddly similar to ourselves. Somewhere along the line, we developed into this naked ape, as Desmond Morris, a known zoologist and ethologist once described us humans in his book carrying exactly that title.
And the monkey remained.., well, the monkey. Who is the lucky one? We or they? 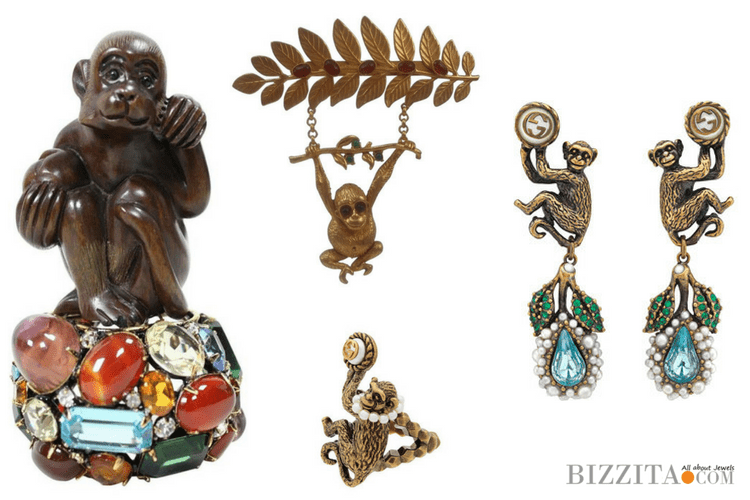 Iradji Moini brooch with stones and ebony monkey, a brooch with a pending monkey from Askew London and the little brooch and matching earrings are by Gucci

Monkeys show us what we could have been still. Monkeys tell us more about evolution than a schoolbook could. Monkeys are sometimes funny, aggressive, impressive and rather intelligent. Soon, a group of Bonobo’s will arrive here at the local zoo. This chimpanzee species is famous for a very particular sociosexual behavior. I can only predict how many people will make fun of them. Which says everything about our own, sometimes rather poor behavior.

I carry a monkey around my neck since 1997 and never took it off again. The monkey itself was inspired by Pomellato, who at the time, issued a series of moveable animals, jokers, kings and queens pendants in gold. I fell in love with that cheeky little guy and have always called him ‘’ Aapje” which simply means nothing else than a little monkey in Dutch! ;-)
Not many people understand why I carry a monkey around my neck, but to me, it’s first of all; an animal. And I happen to love, no, adore animals. But this little monkey stands for something I tend to forget way too often; don’t take yourself too seriously! 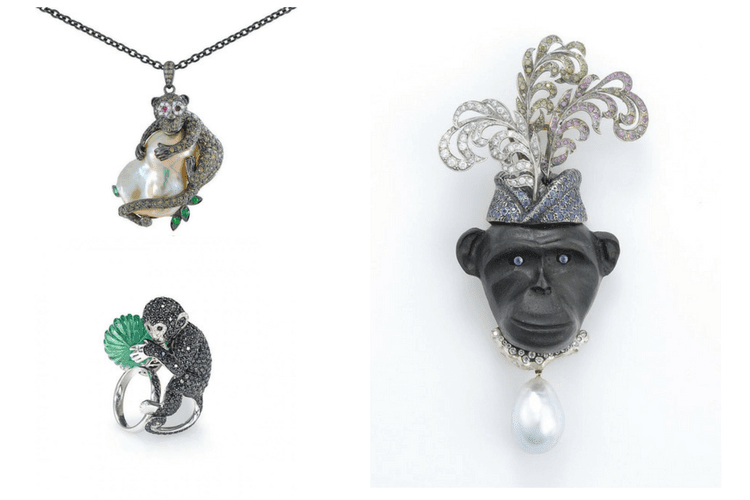 Pendant with Southsea pearl and monkey by Lydia Courteille, one of the most gorgeous monkey rings I have ever seen is by New Italian Art and the stunning brooch with the monkey face in ebony, containing diamonds and pearl is by Sorab Roshi called the RoyalMonkey

There are all kinds of monkey jewelry available. Even the very wealthy love a nice monkey, as one can imagine looking at that necklace and pairing earrings, once belonging to Elizabeth Taylor (and now looking for a new owner for just under $900.000)
Perhaps you never ever thought yourself of buying a monkey in gold or silver. But perhaps also, by looking at these pieces, you'll see what I and others see: a reminder, a cherished nephew, a beloved animal, a bit of our history. Perhaps you too see its funny side and maybe it will bring a big smile to your face too! Embrace your fun side, allow yourself to be silly...! 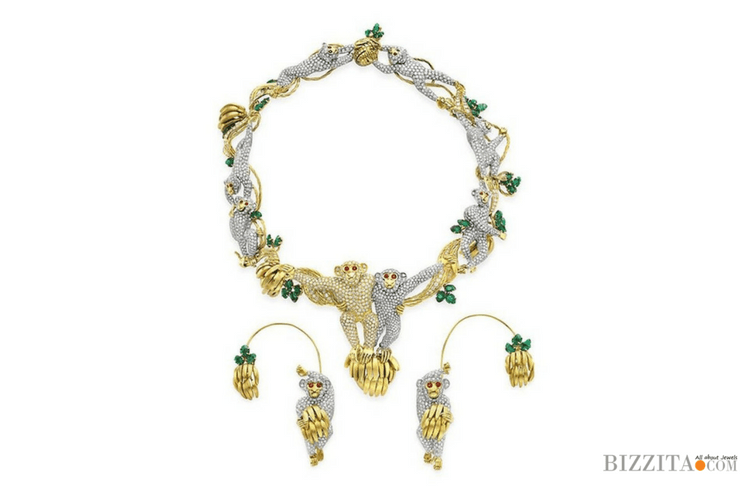 Jewelry once owned by Elizabeth Taylor

From Chopard to Tiffany & Co. From Jacob & Co to Rebecca Koven and many more, monkeys are a favorite amongst the better jewelry houses of this world.
Would you allow this cheeky friend on your finger, ear or neck soon? 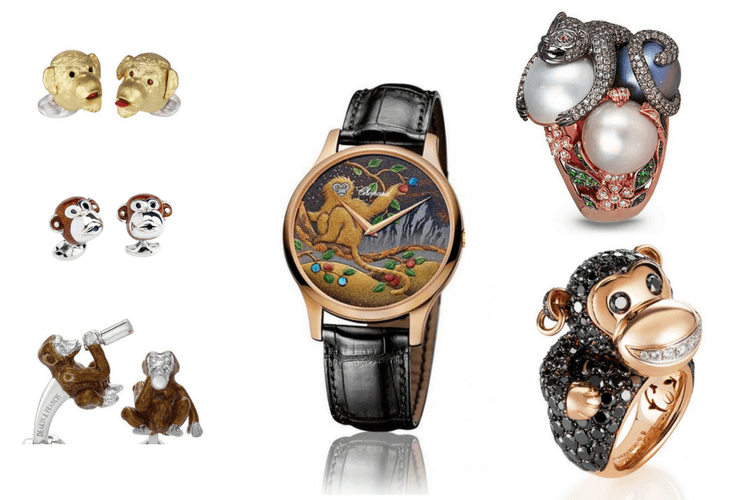 Deakin & Francis Cufflinks, watch with monkey by Chopard and on the right top: Jacob & Co Ring. The Crazymall ring with cheeky monkey is by de Grisogono 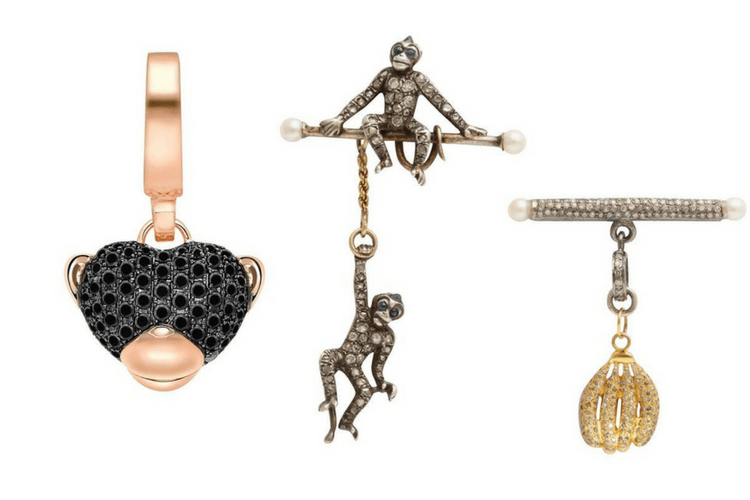 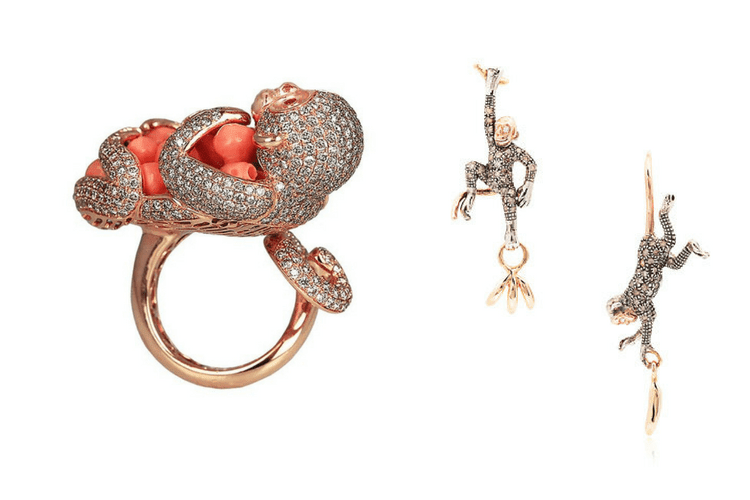 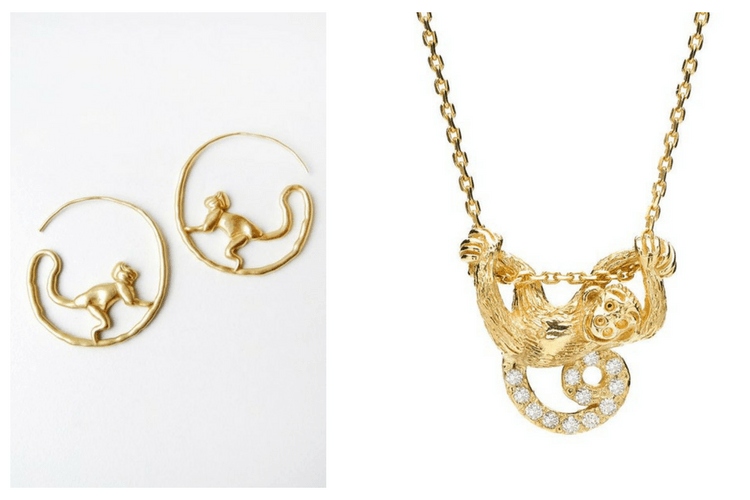 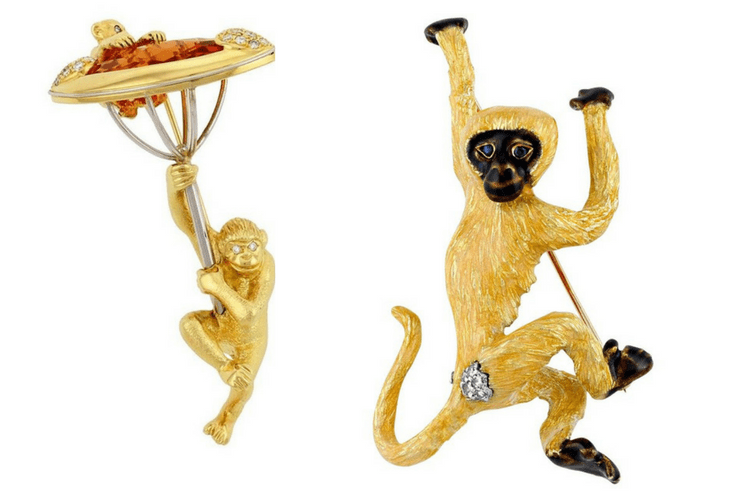 John Landrum Bryant brooch and another by Tiffany & Co 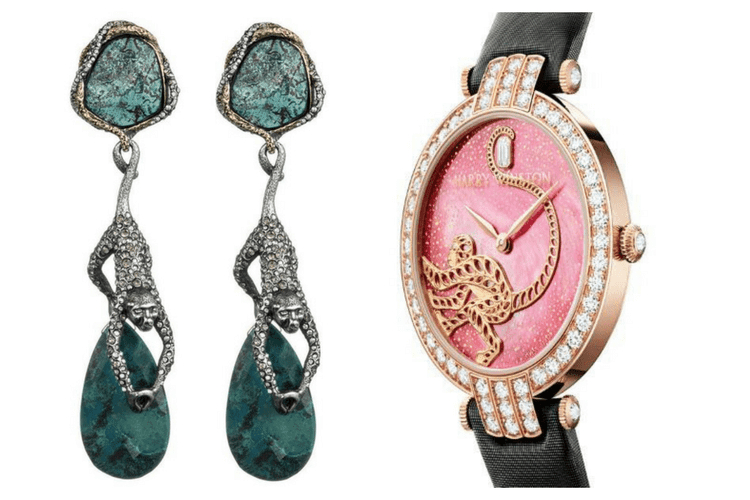 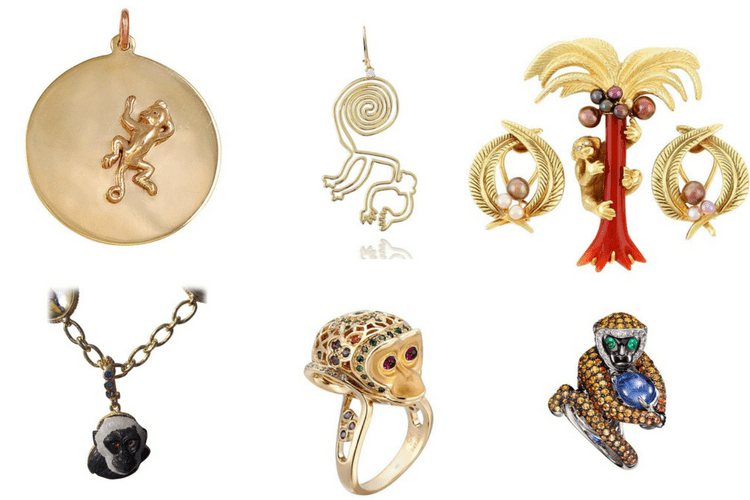 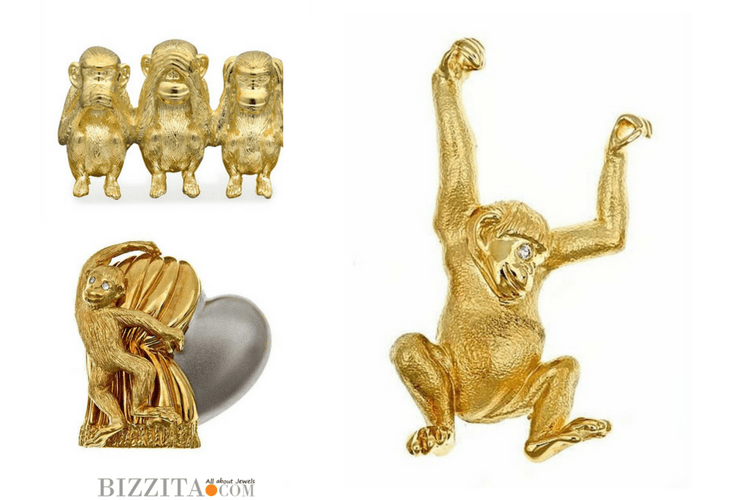 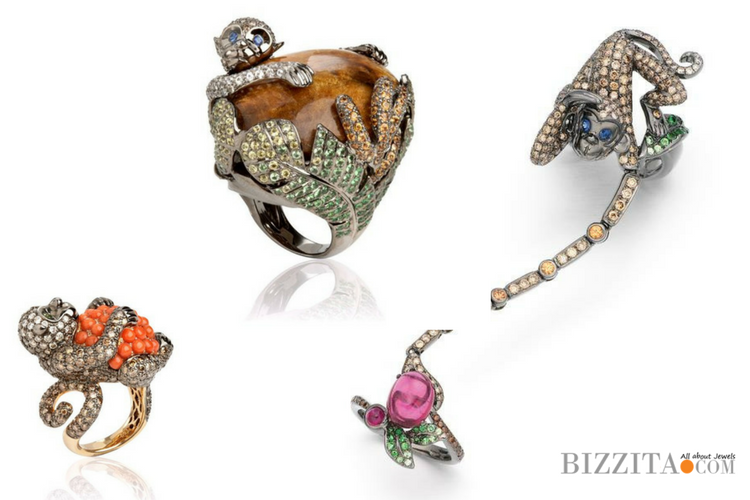 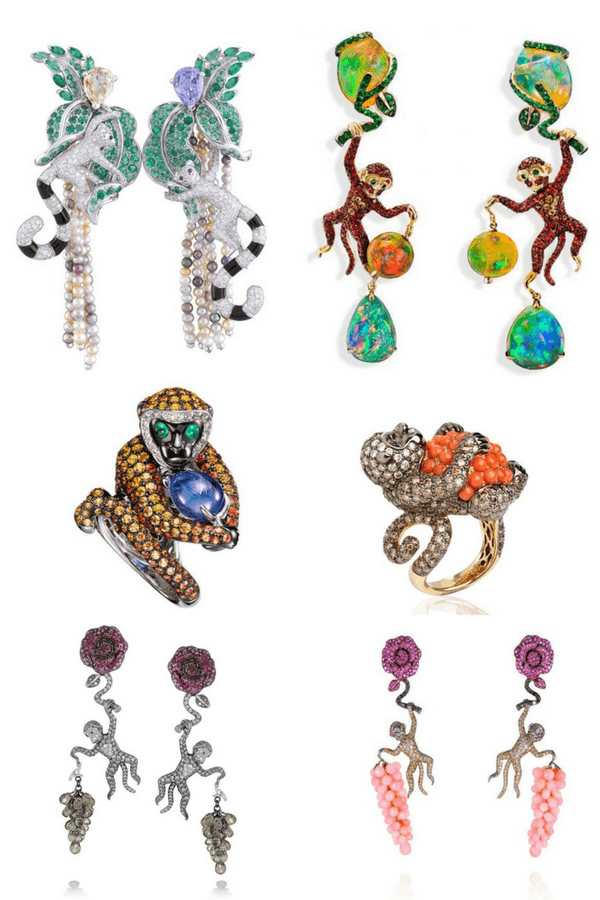 From the front page: Van Cleef & Arpels, ring by Boucheron and Wendy Yue and all earrings by Lydia Courteille