DeGrisogono is one of the most seen jewelers on the red carpet. And his jewelry is much loved by many celebs in this world. A happy marriage, it seems, this outstanding and flamboyant jewelry and the world of celebrities. How did this company get so loved by the celebs in this world? ….. 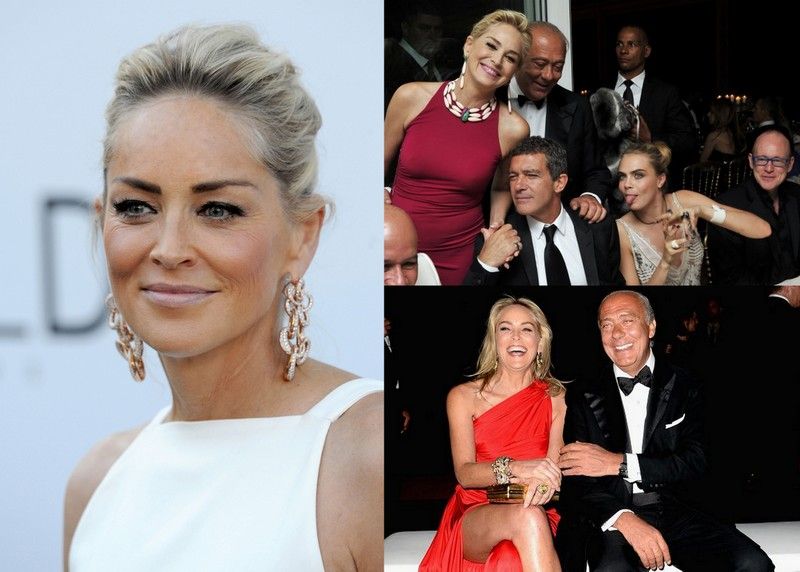 Sharon Stone appears on many occasions wearing the jewelry of deGrisgono. She seems to me such a bright and intelligent woman. I love to see her with the gorgeous dazzling jewelry of Fawaz Gruosi.

Glamour in the bulb fields

As you may have read before, I grew up in the area above Amsterdam, The Netherlands. In the middle of the famous fields of flowers really. That was my humbling summer job as a young teenager: cleaning bulbs. The people are, in general from that area, anything but glamorous. They are stubborn, no nonsense type of people and that’s exactly the mentality that I grew up with. 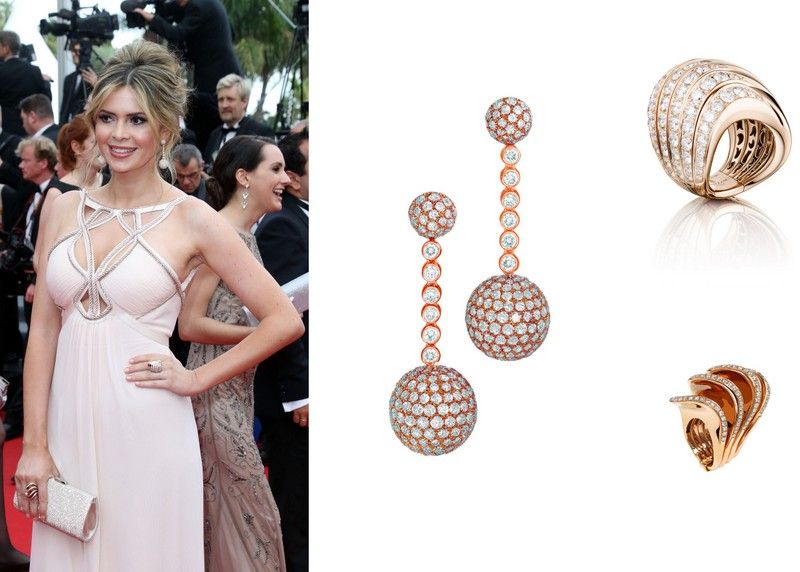 Then one day, in my very early twenties, I found myself living in Italy. In Valenza Po. Here I could still find flowers, but now only in a shop run by a Dutch girl who soon became my friend. The dominating industry in Valenza is jewelry. A far cry from the no nonsense world of North Holland :-) 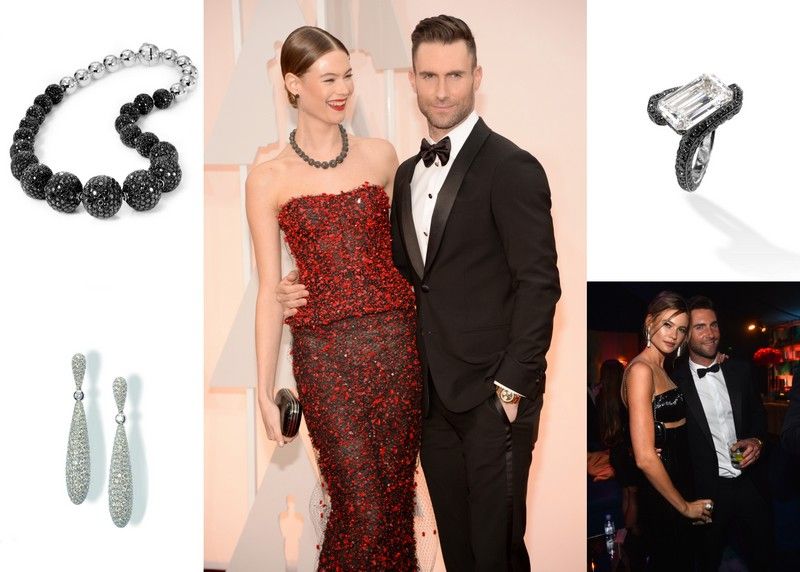 But truth must be told. Even if the people were taking much more care of their appearance and a certain superficial attitude amongst my own age group was kind of new to me, I did soon discover that most people were not so different from those farmers in Holland. They worked hard too. With their hands. Using old and new techniques and aiming, like the flower farmers at an international clientele. 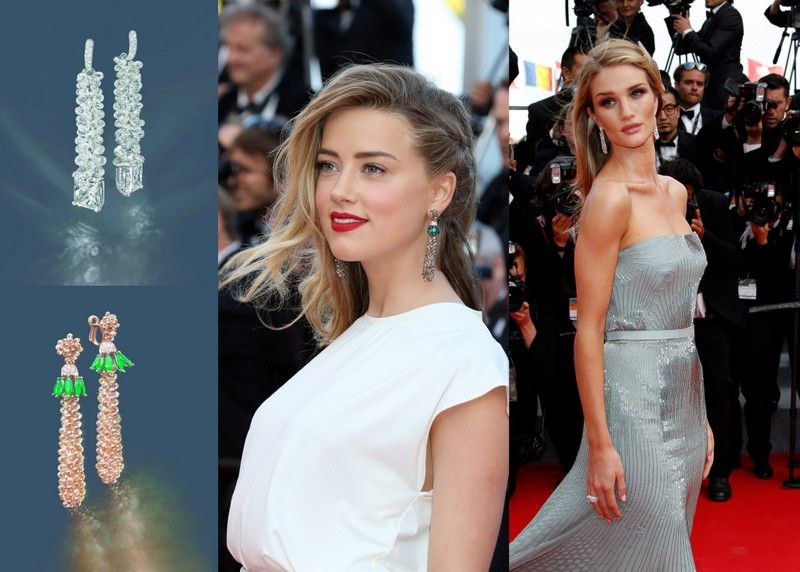 The changes in jewelry marketing during the '90's

I eventually lived in Italy for almost a decade and I grew to love the Italians. And I fell very much in love with the jewelry world. However I did notice that so many were reluctant to change. In the ‘90’s there were the first signs of change. Marketing became a thing. We saw the first clients asking for particular brands that weren’t the big names like Bulgari or Chopard or Pomellato. Those were brands that already appeared with their advertisements in the magazines. But *lesser* luxury brands started to promote themselves too. 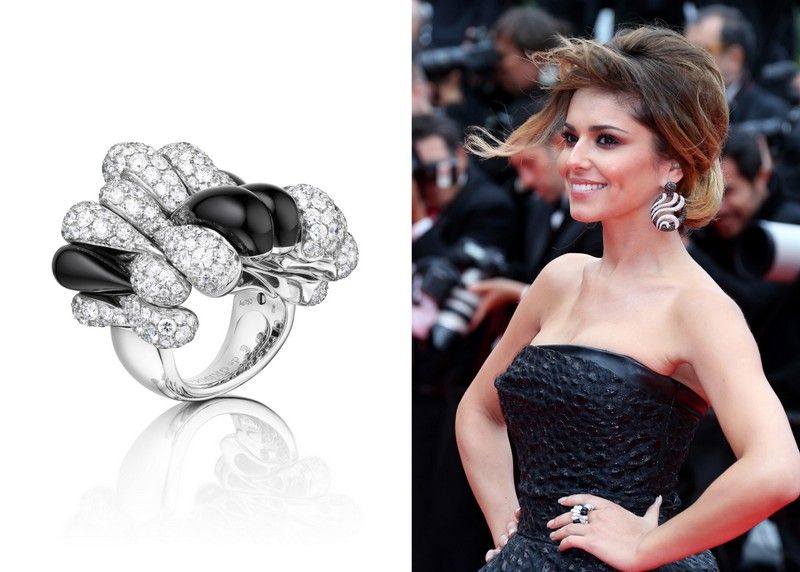 I often went to the bar for coffee, meeting the locals, hearing and participating in conversations. In Valenza their was Damiani who was trying, through product placement on tv, and other expensive marketing tools like advertisements, to build a brand. There was also Pasquale Bruni, who started to have ever more expensive booths at the trade fairs and making name across the then important markets like the U.S. Japan and the Middle East. 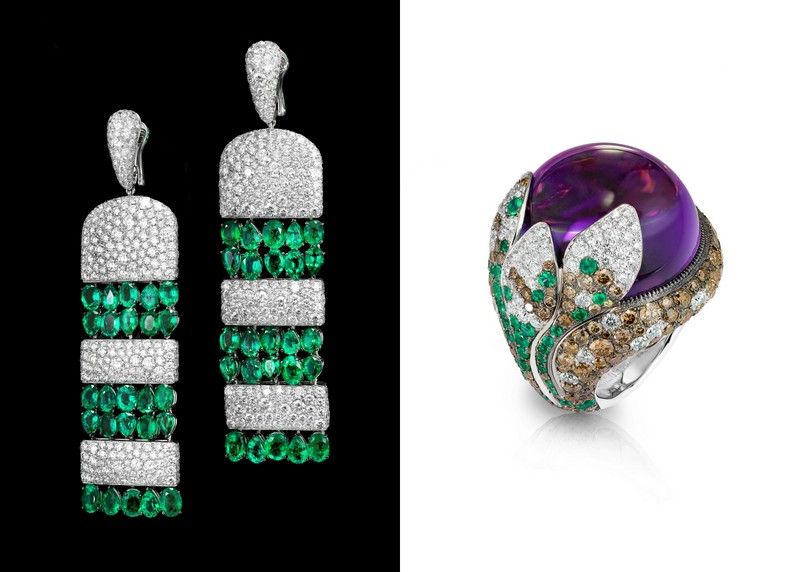 Both these pieces are often seen on the red carpet

Many companies wanted to do the same thing. Build a brand, make their names a household name to the general public. But too often they soon encountered the hurdle of lack of vision. And also, many companies were in those days, mum and dad companies. The kids grew up and became part of the company. Understandable, as this kind of business is a bit of the heart and soul of the Italian small businesses world. 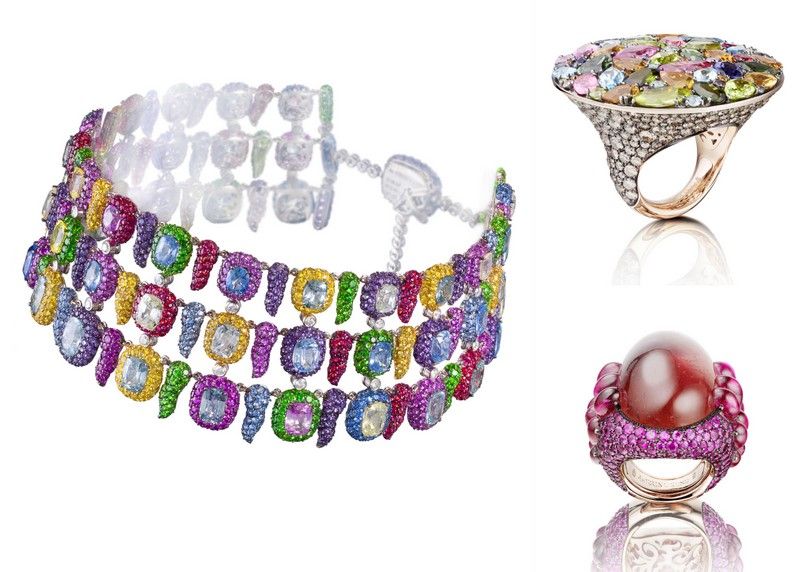 Color, color and size...name me one woman who wouldn't like to be a princess for one night, wearing these pieces

But families are not always great at developing a vision and strategy. I encountered later on the jewelers from Vicenza. So different from Valenza! Much more young people were building their own companies instead of following their mum’s and dad’s. They were young, hip and happening. And many of them did build a brand name….. 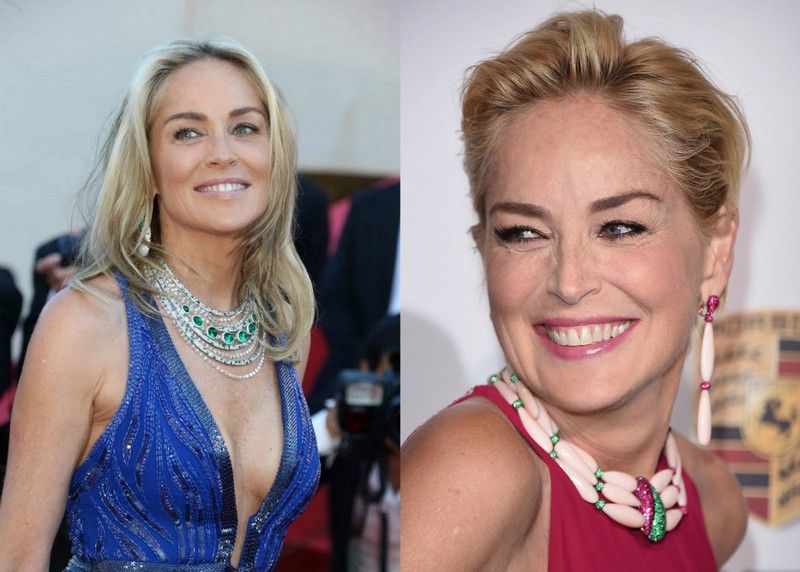 Enchanting beauty, in and out.....

One can not become Cartier in 3 or 4 years time

I am just observing and it is much easier to do that than to actually try and build a brand. Of this I am truly aware, but I was astonished how soon they already believed to be a brand. And how chaotic they often were. Again it was a lack of vision that brought many back to square one, as soon as the crisis hit the world. The vision they appeared to have was to make quickly a lot of money. Be Cartier within 3 or 4 years time….I admired their bold and daring attitude. I admired their killer confidence. I could literally touch the energy they vibrated into the world. And it was fun! 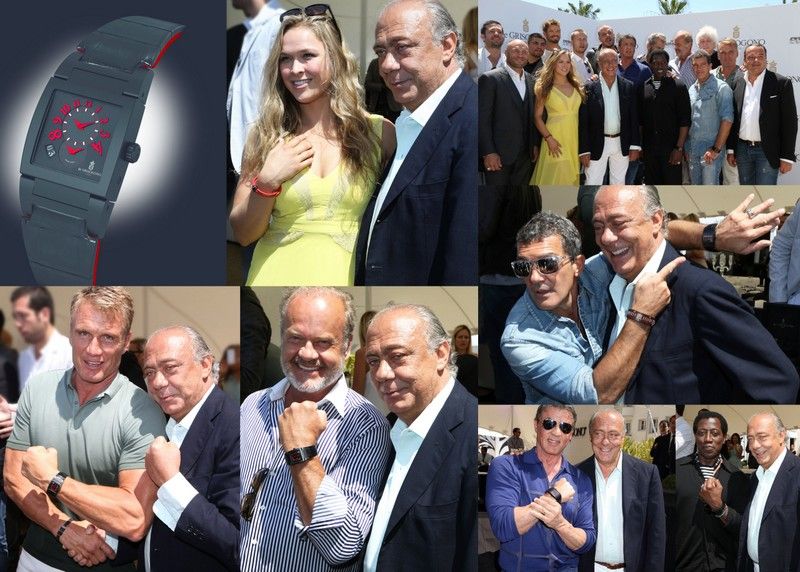 But still…..I could also observe how many failed to please their clients. Lacking in service, which now became a huge issue for the public. And it is not just the crisis that struck, or the lack of experience in business that brought so many to their knees, but it is probably the lack of ability to keep listening to the clients. Now I know they would immediately disagree! Listening to the clients is as much an abused phrase as *sustainability* or *being client-friendly* but the truth is that few companies really listen and really observe the world that is, indeed, constantly changing. 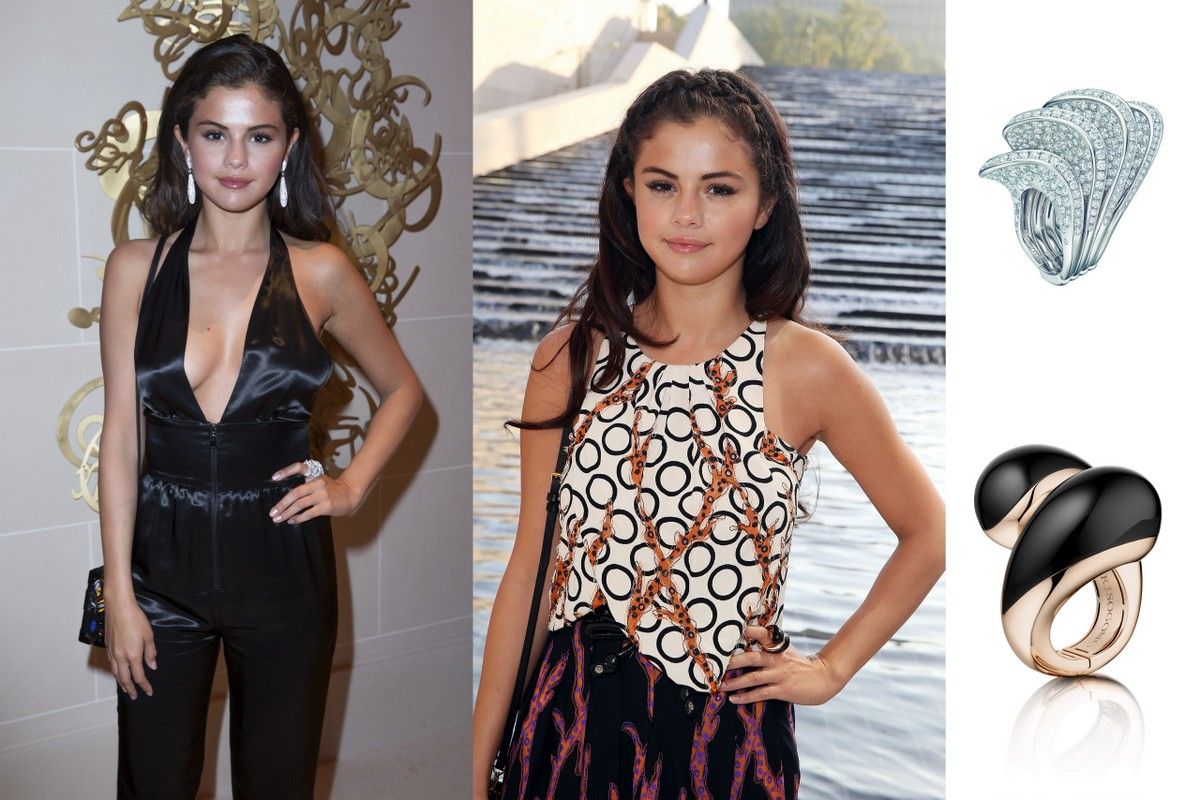 Youung and famous all over the world, Selena Gomez ....Love the earrings on her. Maybe a little too tiny and young for such an important ring? Still; she looks beautiful

And then there was Fawaz Gruosi

We are coming out of the crisis and I look around how many of these companies have fallen. How many talented and wonderful people lost their dreams and jobs and companies. And I look at those who are still standing.One of  them is now one of the biggest names in the world, but with a much younger history than Cartier, Chopard and so on. It is deGrisogono.  Founded by Fawaz Gruosi, who’s is half Italian and half Lebanese (I can only imagine how well he must have eaten, I adore both cuisines a lot;-) in the early nineties. Fawaz, who says in an interview I read, that he started working at a jeweler in Florence, got discovered by Harry Winston and the Saudi Arabian family Alizera and went to represent Harry Winston in the Middle East. After that he started to work with Gianni Bulgari, patriarch of the Bulgari brand and it was him, as the article stated, that gave Fawaz the opportunity and trust to build his own dream, his own brand. 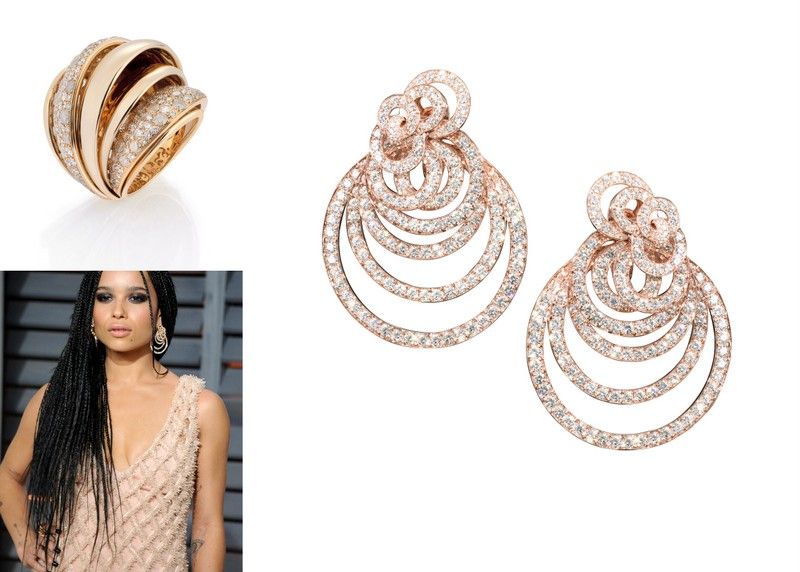 When you look at all these pictures here, you see an unbelievable variety of celebs wearing de Grisogono. Attending his parties at Cannes and other places in the world. Eager to appear together on the red carpet and so on. I know that this works well both ways, but Lord has Mr Gruosi dared to dream big! He started the oversized trend of men’s wrist watches by launching the Uno collection. He also started to use black diamonds and became famous for it, long before other companies followed his path. He is a trend setter, yet I do believe also that he is less interested in trends than in creating uniqueness. Daring to dream big is creating a bracelet that resembles a hippo and be confident that it will sell. Daring to be overwhelming when understated chic seems to be the trend. Daring to dazzle with color and size. 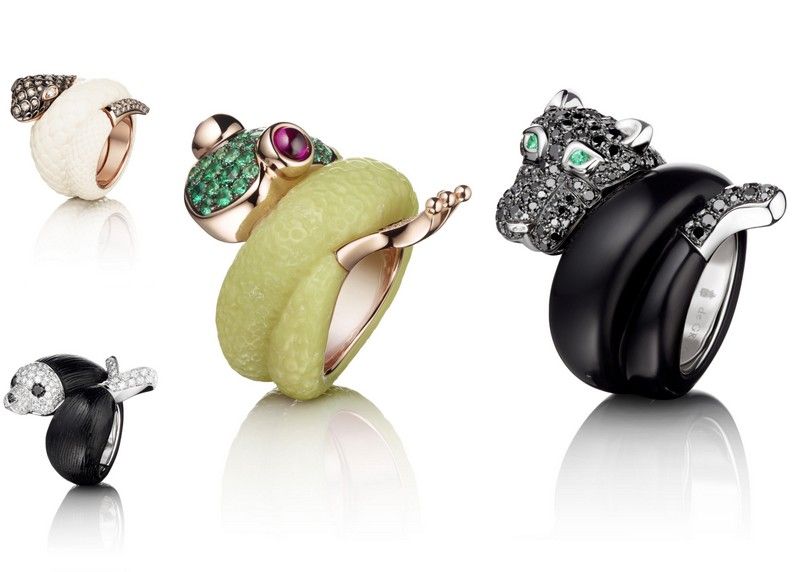 One thing is to engage with the Cannes Festival and the red carpet celebs all over the world. Another is noticing the importance of social media. One of the things that struck me most was that without me telling them that I published a little blog about them, they send me an e-mail, thanking me for the publication. And asking for my address so they could send me a card to thank me. It may be a small gesture but in that small gesture I recognized their elegance and their attentiveness. It is in small unexpected gestures that you notice how big a company really is. And it revealed to me just a small part of the mixture that makes them such a success today.

It may have been the Kings, Queens and Emperors that made the classic companies like Cartier big, but deGrisogono has chosen the kings and queens of today; the celebrities that are admired all over the world, to create eternal fame. Fawaz said it perfectly when I asked him what his dream was.....and he is such an inspiration to all those who wish to dream BIG! 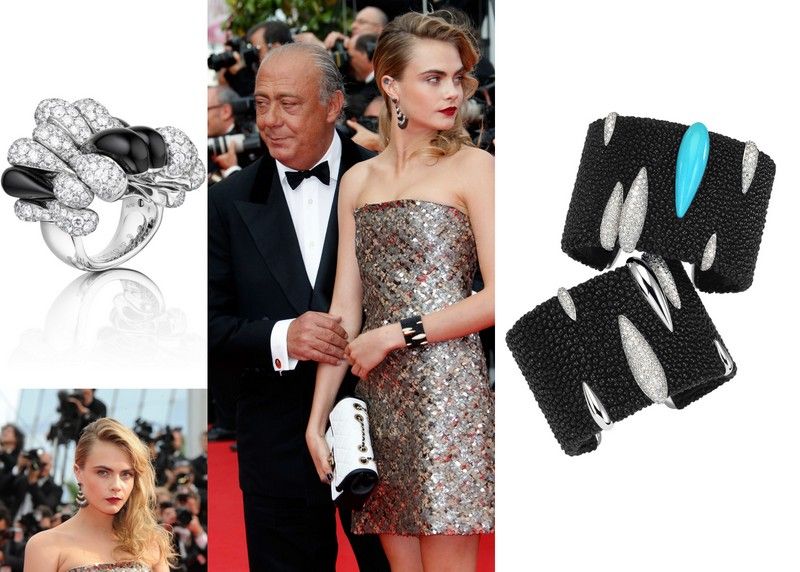 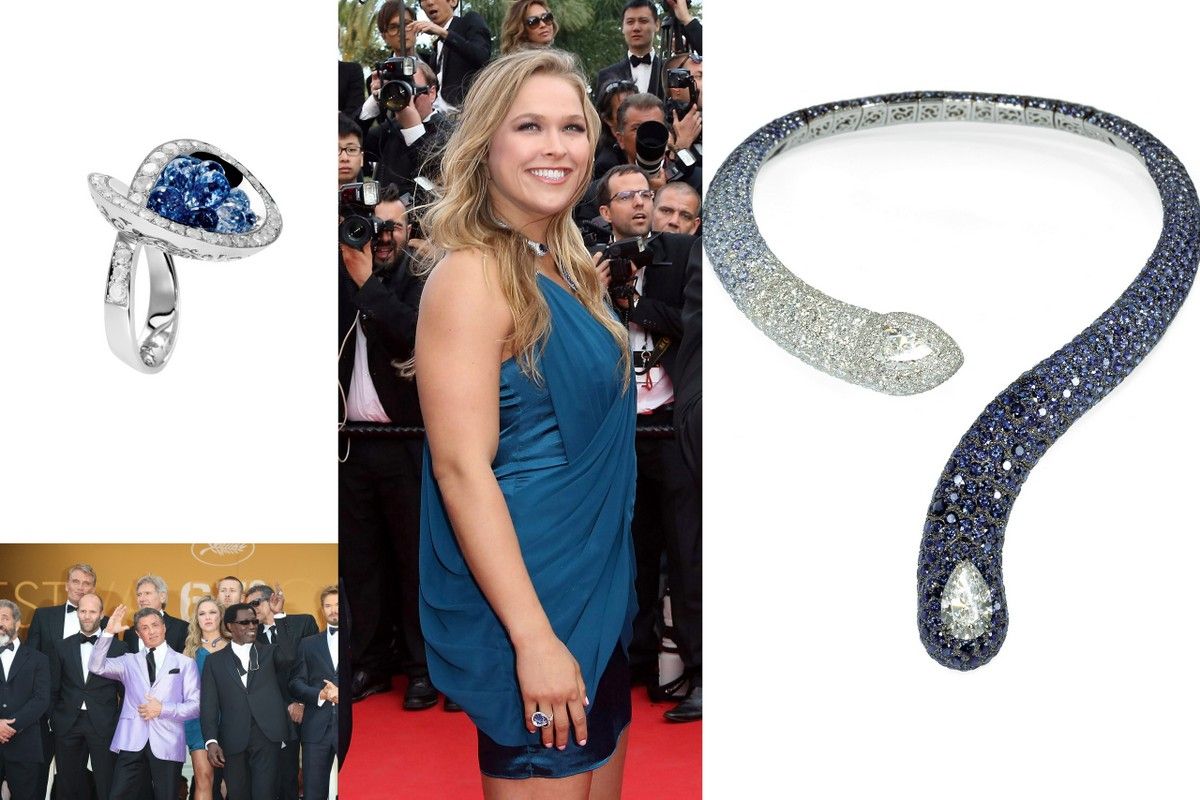 Ronda Rousey, from the cast of the expandables 3, wears this beautiful necklace by deGrisogono during the Cannes festival. And she glows health and looks powerful and confident. Love her style!
Tags
Cannes, celebrities, degrisogono, Red carpet