We are proud to present our first guest blogger on Bizzita! Ya'akov is Communication Director at World Diamond Mark and the Antwerp Diamond Trade fair.

In 2017, Amsterdam, the city where the modern diamond industry struck its first roots more than four and a half centuries ago, has no major significance as a diamond trading center, and certainly no significance in diamond manufacturing.  Its bourse, which is the second oldest diamond exchange in the world, is small, and many of its 100-odd members are retailers. Any Dutch diamantaire will tell you that Antwerp is the world’s undisputed diamond hub.

So how come consumers around the world think that Amsterdam is still the world’s diamond capital? 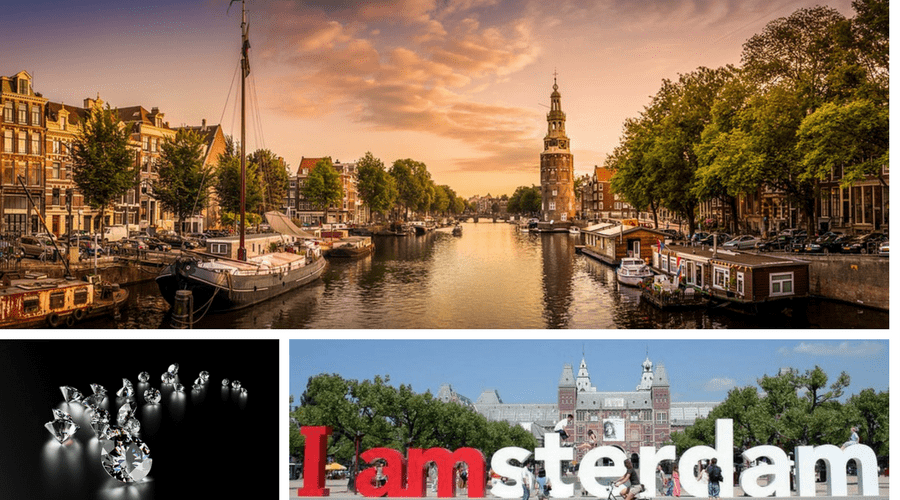 Because of marketing.  That single word sums it all up, but the story behind it is fascinating.

Two Dutch diamond companies, Coster Diamonds and Gassan Diamonds, are currently responsible for the marketing message of "Amsterdam Diamond City." While both companies have deep historical roots in Amsterdam’s past history as a diamond manufacturing and trading center, today these companies concentrate exclusively on marketing diamonds to the many millions of tourists that visit Amsterdam. And there is no escaping the marketing message they transmit. Thanks in large part to them, Amsterdam is painted as the world’s diamond capital in invitations, brochures, flyers, billboards, TV ads, and of course, online. In short, the message “Amsterdam—City of Diamonds” is everywhere. For instance, the back of my Amsterdam hotel room key bore an invitation from Gassan Diamonds to come and see its factory and showroom.

“We spend huge amounts of time and efforts to get the message out, and we use a wide variety of marketing methods and advertising tools in order to bring tourists to our showrooms,” said Kees Noomen, president of Coster Diamonds, when he hosted me at his company’s premises. 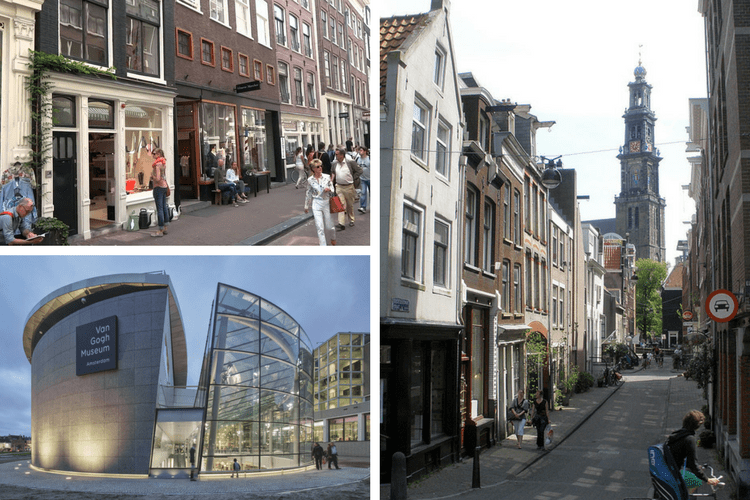 Luck also enters into it. Coster’s current location is ideal. The company occupies four interconnected patrician villas, right across the street from the Stedelijk (City) Museum and the Van Gogh Museum, and adjacent to the Dutch capital’s Museum Plaza. “Many years ago, Coster had to move out of its original premises in the original diamond district, due to major city renovations, and it was offered this location instead. And it’s just great for tourist traffic,” Noomen said.

Gassan Diamonds also has a great location. Back in the heydays of Amsterdam’s diamond industry, the firm’s majestic building housed a huge diamond polishing plant, once built and owned by the Boas diamond company, where, during the late 19th and early 20th century, the polishing wheels were powered by steam engines….The cutters are long gone, but the landmark building remains on one of Amsterdam major waterways, which gets a lot of tourist traffic from the hundreds of canal boats that moor alongside its quay, located at the back of the building. In front of the building, a huge courtyard offers parking to the dozens of tour buses that drive through the gates every day. 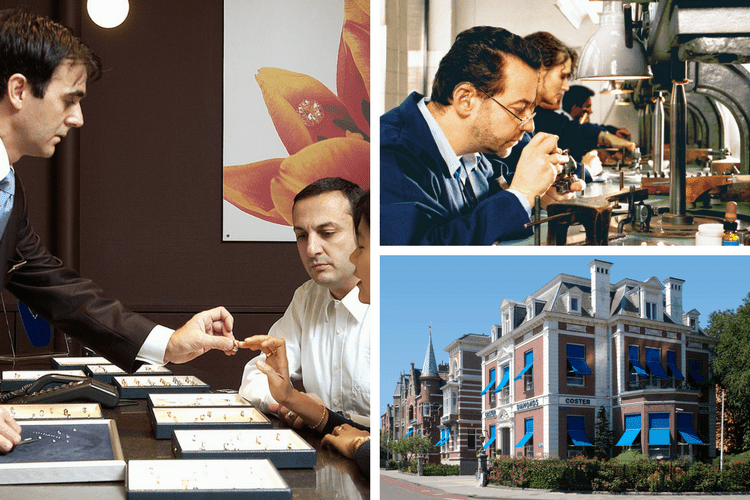 But getting the tourists into their buildings is just the culmination of the process.  “Our network is pretty large and we’re constantly tapping into it,” explains Willian van der Horn, marketing manager for Gassan Diamonds. “We are in constant touch with incoming tour operators, as well as with cruise companies that have Amsterdam as a regular stop.”

At both Coster and Gassan, incoming tourists are first given a detailed tour of the “factory,” which is, in fact, a showroom where a handful of diamond cutters sit behind glass partitions, cutting and polishing or repairing individual stones. Once the tourists have been inducted into the secrets of the world of diamonds and are inspired by its romantic stories, they are introduced to the jewelry showrooms located elsewhere on the premises.

Van der Horn said that Gassan has guides and sales representatives on staff that speak some 30 languages so that Japanese tourists are welcomed in Japanese, Russians in Russian and Chinese tourists in Mandarin or Cantonese. 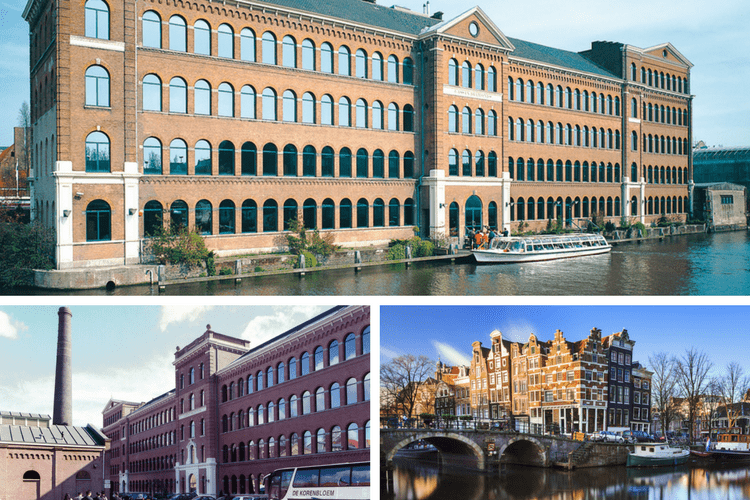 Coster Diamonds works in a similar fashion. Having members of staff who speak the tour groups’ languages gives these firms much greater advantages than just the ability to offer them a guided tour in their mother tongue. The guides are familiar with the tourists’ background and culture, and therefore know what aspects of the guided tour to focus on, and precisely which products will appeal most to these potential consumers, Noomen said.

So why does the consumer come away with the impression that Amsterdam is still a diamond center? It’s a combination of the immediate historical surroundings, such as the building itself, the rich diamond manufacturing and trading history as portrayed by the many historical photos and the fascinating story that a company like Gassan and Coster tell about its past and its present. The myth of Amsterdam’s continuation as a diamond center is strongly supported by its indisputably rich and fascinating past.”

At Coster Diamonds, an extra dimension was added to the diamond experience this year. The company turned one of its four villas into a museum, dubbing it the Amsterdam Diamond Museum 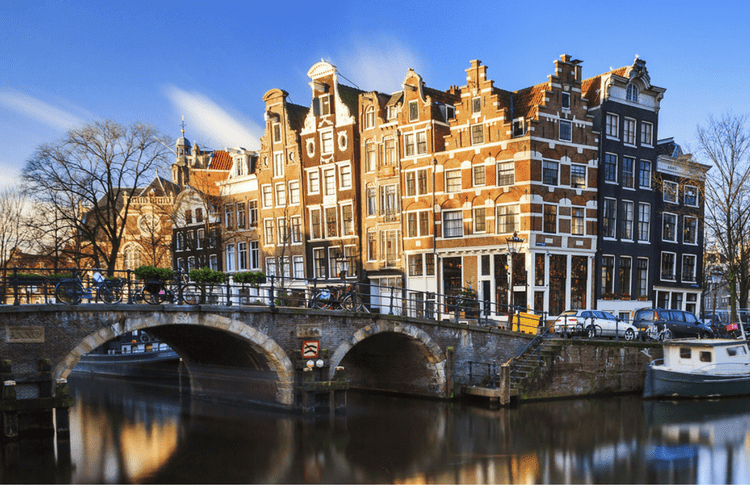 While it has been set up by a private company and is small, this museum offers a concise but interesting overview of the geological origin of diamonds, mining, and the history of diamond manufacturing and trading in Amsterdam in the past four centuries. Coster, personified by Robert Tamara, the museum’s director, and chief curator, has -- in this writer's view -- done a terrific job and created another small jewel.

“The museum has given our company yet another dimension,” Tamara said. “Through it, we seek to pay tribute to our city’s past and the rich diamond history Amsterdam can draw on, as well as its present.”Of course, the story would not be complete without a description of the tourists. Where are they from? And who buys more, the Americans or the Chinese?“Think again,” Noomen said. “As the world changes, so do the tourists. Russian tourists have become very important buyers and the Chinese also have a great appetite for diamond jewelry and they know what they want. Americans still come and buy, but they have long since lost their number one spot among our tourist clientele.”

Ya'akov Almor is the first contributor to Bizzita.com If you wish to know more about Ya'akov and his rich experience in the diamond, gem and jewelry industry, do look him up on LinkedIn

If you like to contribute to Bizzita.com we do encourage you to contact us! We are interested in people with their own point of view or opinion. Or maybe you have a great story to share. How can you contribute and share with our audience your insights, knowledge, fun facts, interesting stories etc?