Stunning jewelry from the 16th and 17th Century. Find out why this era was so exciting!

Whilst some of us think that everything new and exciting happens only today and jewelry is more ‘’bling”, daring and bold than ever, think again. Our history is filled with magical moments of discoveries and new techniques. New worldwide economies and expanding adventures on the oceans opened the route to new countries, new trades, and new cultural influences and arts slowly spread across the Europe. The part of the world that came to rise in the 16th century. Jewelry became very detailed in those days; mini-sculptures, enameling and more. Books from the great Benvenuto Cellini gave us an insight into jewelry and the making process.

This jewelry is special and deserves to be looked at again with fresh 21st Century eyes, and why not; taken as an inspiration for modern jewelry!

Both designs are from around 1600 and probably Dolphins

The 16th Century and the early 17th Century were incredible times. It was the beginning of the rise of the West and Spain and Portugal sailed all over the globe. Parts of the New World became colonies of these two nations and their culture and language have influenced in ways that we still notice today. Although it must be said, it was a great time for the economy and development of the West. A far less great time for all the colonies and the local people who were suppressed, bullied, turned into slaves, murdered and so on. Personally, I find it a little difficult when our own politicians (here in the Netherlands) boast about the Golden Era and our merchants are the time. A lot of people paid a very high cost for that wealth. 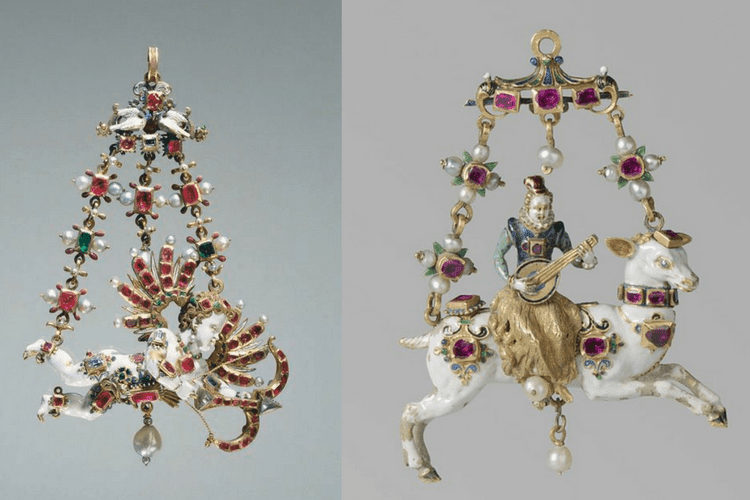 Two pendants, both enameled, in gold and with natural pearls and gemstones such as emeralds and rubies. Both from the Rijksmuseum

Mercantilism became the leading school of thought and people were not seeking win-win deals. Worse, it was all very much a zero-sum game-negotiating situation where the interests of the parties are directly opposite each other. The profit of the one is the loss of the others.

It was in those days that Luca Pacioli produced the first book on accounting. 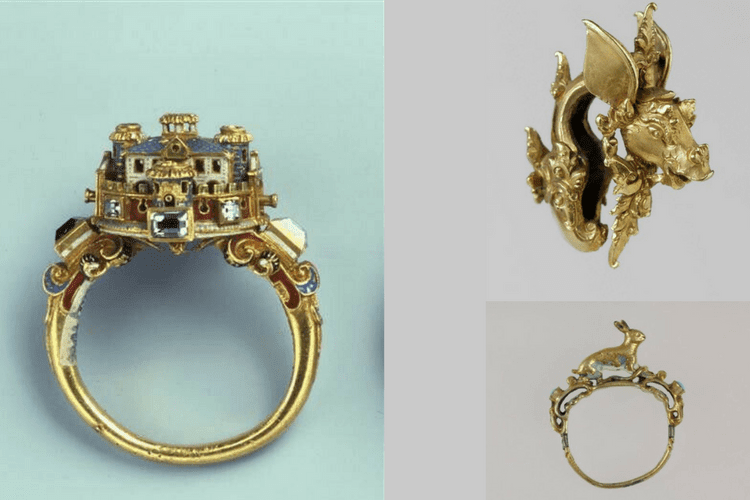 Two rings and above right; an earring. The earring is from a very early age ± 1300. The hare is probably a symbol of fertility

This period of the Renaissance showed jewelry that wasn’t heavy-looking but rather like mini sculptures. An interest in ancient Rome and Greek, details of the religious world, nature and botanical features are the leading themes for mostly pendants. Brooches were popular pieces of jewelry in the ages before, but pendants, worn on gold chains, became wildly popular. 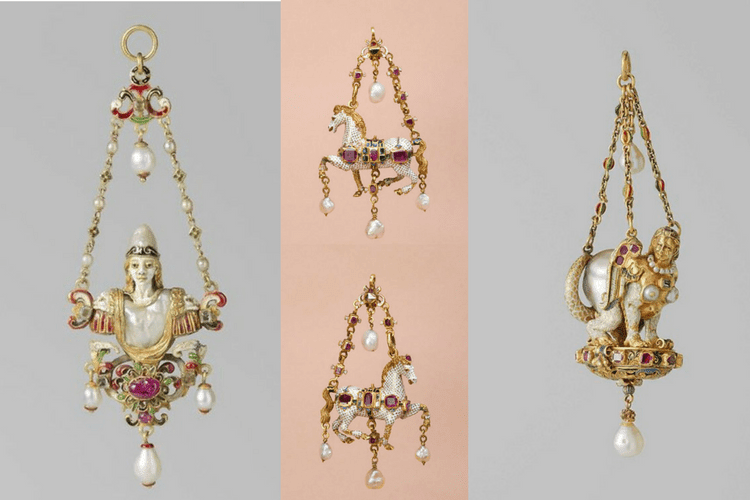 The Dutch and the VOC, More diamonds, More gemstones

Towards the end of the 16th Century, the Dutch started sailing the globe too. Taking over the lead from the Spanish and Portuguese, which led to many conflicts in several parts of the world. Spices were the main trade, but as Vasco da Gama opened the route to India, passing Cape Hope, it became possible for merchants to directly trade with India. Opening a market for gemstones and this lead to large amounts of diamonds on the European markets. 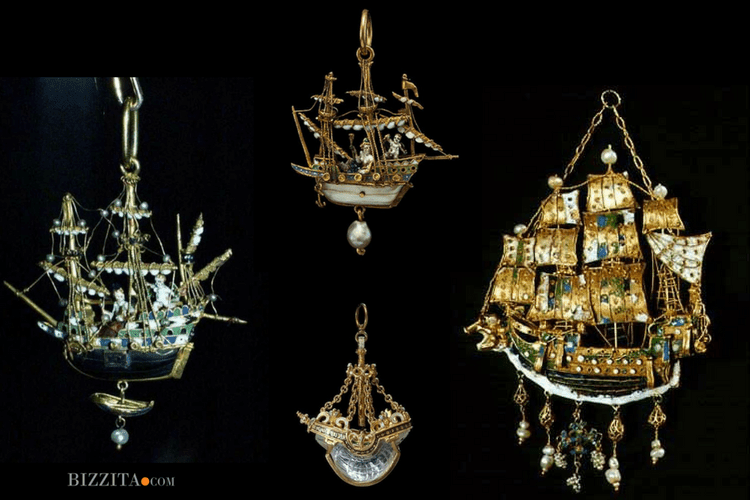 These pendants are incredible. The first was probably a gift to or from Queen Elizabeth I, above in the middle we see Venus and her son Cupid, lots of details everywhere. In the middle underneath a gold ship with a big carved gemstone. The large golden ship is from the 17th Century

Diamond cutting in the 16th and 17th Century

Did you know that the Diamond cutting industry was first based in Brugge (and Paris)? It moved to Antwerp and due to logistic reasons during the 80-year war between the Netherlands and Spain, they moved to Amsterdam. Amsterdam remained the capital of diamond cutting in the world for centuries to come, however, Antwerp regained its position in the 20th Century. 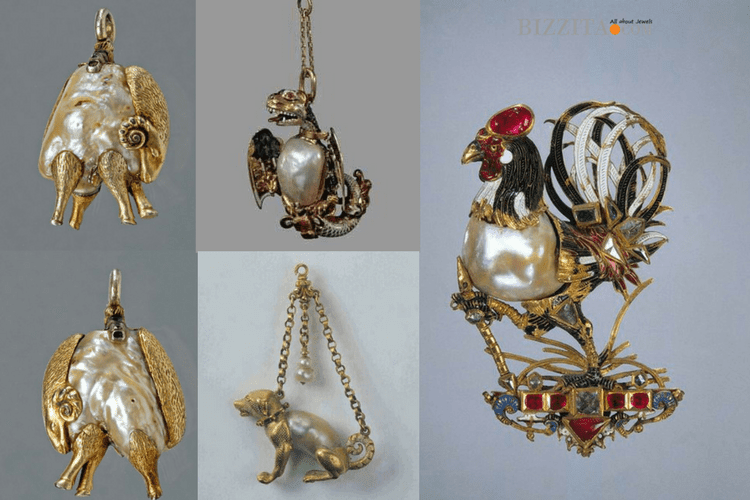 Pendant from the Order of the Fleece with large baroque pearl, in gold and gemstone, in the middle above a dragon from De Medici family and below that a hunting dog (Schmuck Museum, Pforzheim) The large rooster is from around 1600 and is found at the Rijksmuseum

Jewelry techniques in the 16th and 17th Century

The jewelry in the described period was made of gold and silver. Techniques like enameling evolved and painters may have designed many of the jewelry. As techniques evolved, so did the appreciation of craftsmanship and specialists. Often more than one person would work on one piece of jewelry. Much like today, where enamelists are highly skilled people, designers are seldom the goldsmiths actually making the jewelry, and setting gemstones are also done by true specialists. 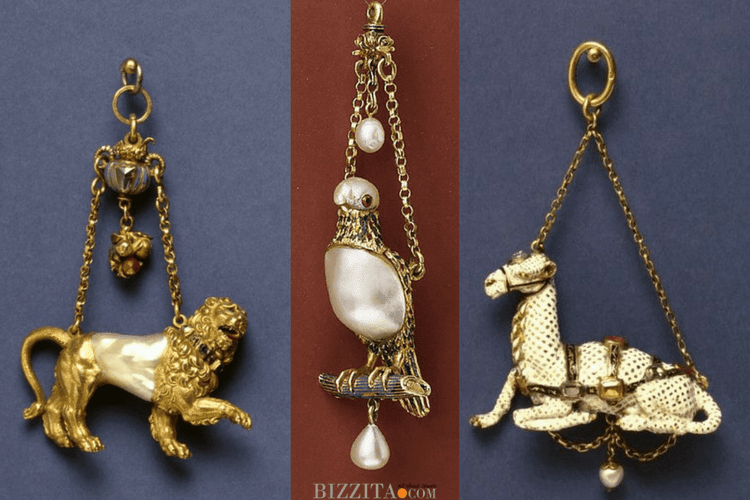 Benvenuto Cellini, also known as Uomo Universale, much like Leonardo da Vinci, was a famous writer, painter, sculpturist, musician, and goldsmith. He wrote a book that still today gives us a great insight into the techniques in jewelry of the 16th and 17th Century. By the way, the book is still available on Amazon!

Lamb of God, laying on a book with seven locks, enameled in gold, German and dated 1580- Rijksmuseum. The gorgeous lion pendant is from the 16th Century. Toad created with a stunning pearl- Rijksmuseum and a religious pendant showing Mary and Jesus from around 1500

More rings on one finger? Not a new trend!

Did you know it was common in those centuries to wear more than one ring? All five fingers could be bejeweled and even more than one ring per finger, worn on different joints of the finger, much like the cool trend we see today, was already a vivid trend in those days!

See, there isn’t that much new under the sun ;-) 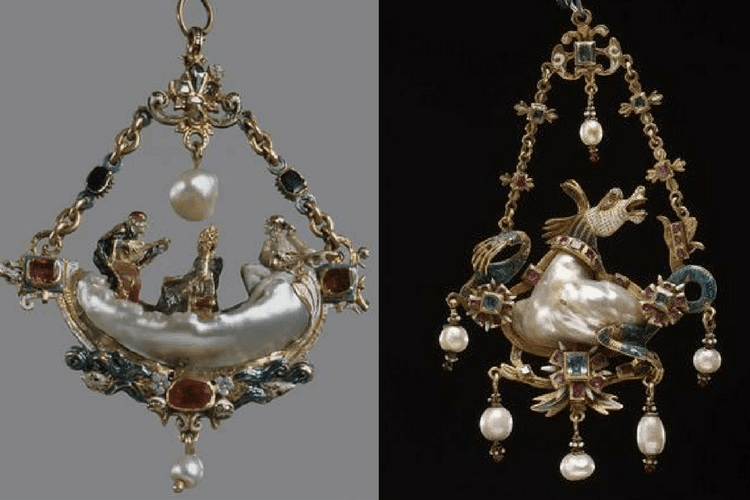 The Gondola pendant is from the Medici family, dated back to 1568 and the wonderful hippocamp is from around 1600

Some of the rings in 16th and 17th Century had space underneath the bezel for scented gum. Hygiene was terrible in those days, although the first flushing toilet would soon be introduced but still. Did you know that many wore a little bit of fur somewhere on their dresses? Sometimes even held in the hands all the time? You may discover this in some paintings too;  these were flea furs. People hoped that fleas would prefer to stay onto the piece of fur, rather than on the human skin and as the fleas were so common and persistently present, it was a way of dealing with the little pests. 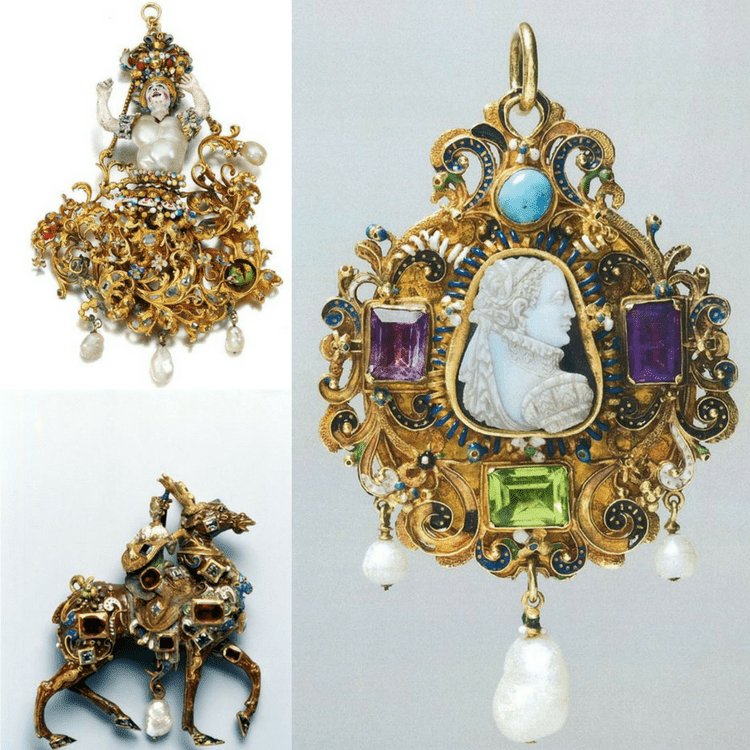 The pendant above is from Southern Italy and the Lute player on horseback is a brooch from Germany. The large pendant on the right is from Mary of the Scots-1570

Earrings made a come back in these centuries. After a decline in interest before. Although of rather simple design. In the decades after this period, earrings would gain popularity and become much more elaborate and interesting.

The jewelry themes were still very much religious, even in a period were religious wars were disrupting economies, countries, and culture everywhere. But bows, decorative scenes from nature, boats, botanical and animal sceneries, it was all there, Undoubtedly, many of the figures from nature etc. had their very own meaning and symbolism marked as much as it always has done, the themes in jewelry. 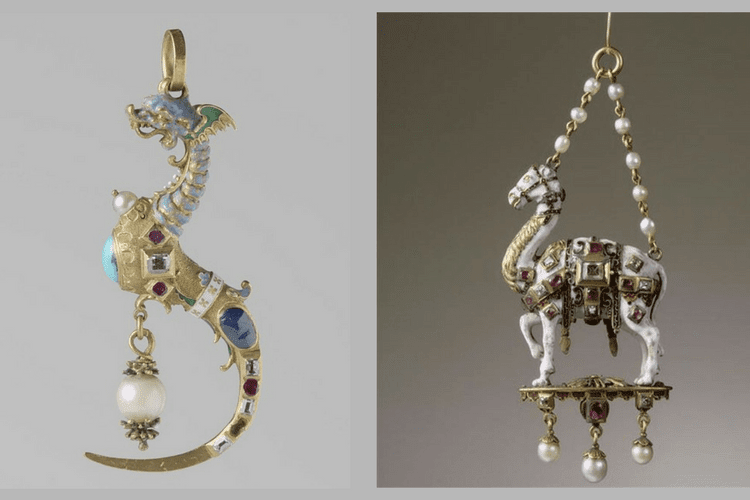 Pendants were sometimes also earpicks or toothpicks, such as this little gorgeous dragon from 1550-1600 (Rijksmuseum) The Camel is amazing! In gold, diamonds, enameling and of course; pearls. German 16th Century

Gemstones and pearls, many pearls

Pearls, natural pearls, and baroque pearls are extremely popular in these centuries. As are the classical 4: diamond, ruby, sapphire, and emerald

Imitation jewelry is also growing bigger and bigger. Imitation gemstones such as glass, foiling techniques, and doublets allow the wearer to not spend a fortune for every piece of jewelry. The table cut was the most seen cut in diamonds, later in the 17th Century it was the rose cut dominating the diamond cutting scene.

The arts and the artists!

Clearly, the arts were appreciated in these days. Rich people funded talented artists in becoming skilled artisans. This was the era of Leonardo Da Vinci and Michelangelo, Shakespeare, Rubens and the early 17th century with the rise of the success of the VOC ( Dutch East India Company) and the wealth it brought to the Netherlands; Rembrandt van Rijn, Jan Steen, Vermeer and Frans Hals.

In 1654 the British Museum opened its doors and in 1632 the building of famous Taj Mahal started. In 1636 Harvard University was founded in Cambridge, Massachusetts and the first opera house was build in Venice in 1637 - the San Cassiano- 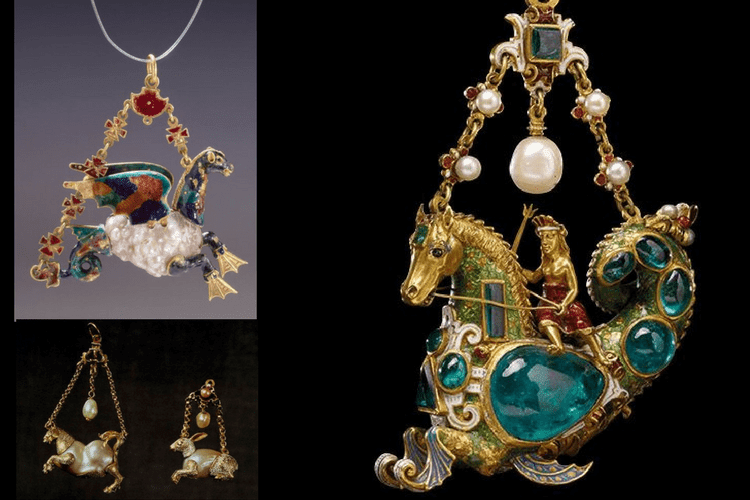 Hippocamp from the Hermitage, St Petersburg, two pendants a horse and a rabbit (?) in large natural baroque pearls and gold, Florence 1590 and one of the most alluring pieces I have ever seen: Hippocamp, Erasmus Hornick, Spain 16th Century

Just to give you an idea of things happening in those years: 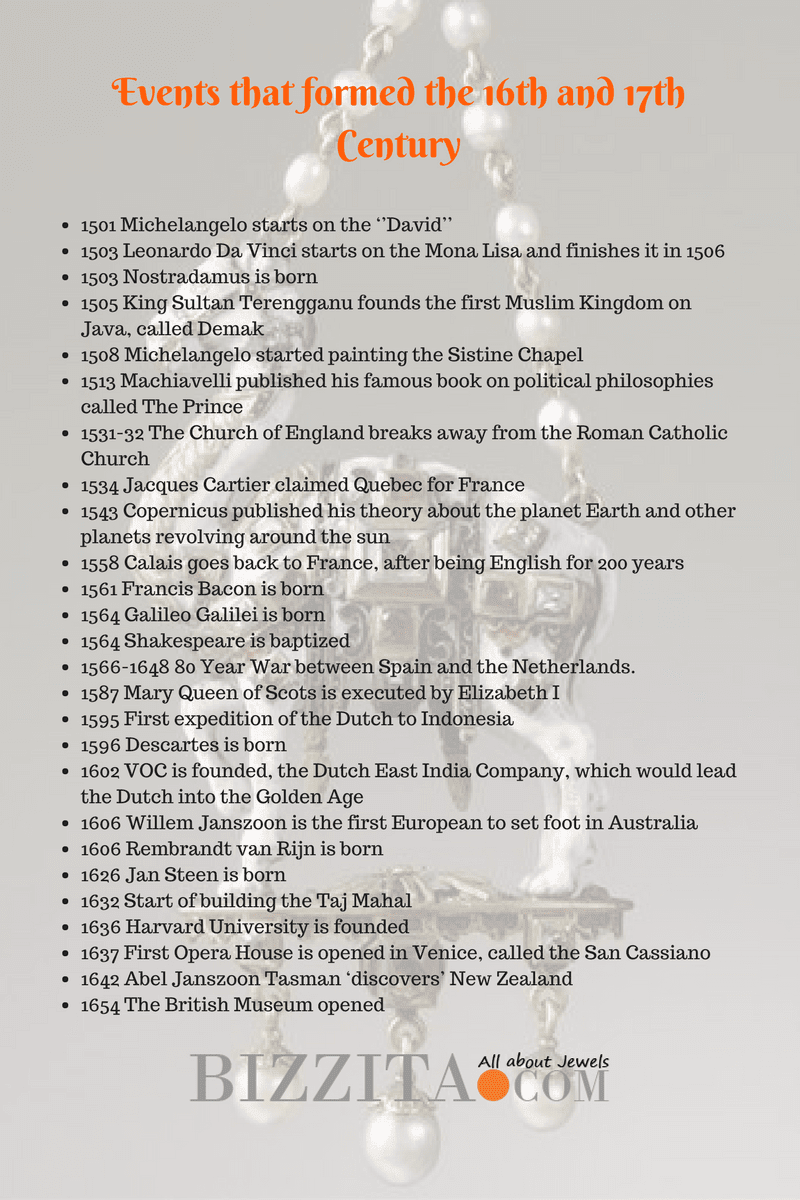 Jewelry of the 16th and 17th Century as an inspiration for you!

The jewelry you see on this blog is incredible in detail and in appearance. For sure, they are still an inspiration for many designers of the fine arts in every sense. But perhaps also for you, you as an observer of jewelry and beauty. You, that might want to check out a different type of jewelry next time, inspired by what you found and read in this particular blog. Your mind a little more open, your view on jewelry broadened ….

I simply hope you loved looking at the wonderful pieces of jewelry just as much as I had fun finding all these items and reading and writing more about them! 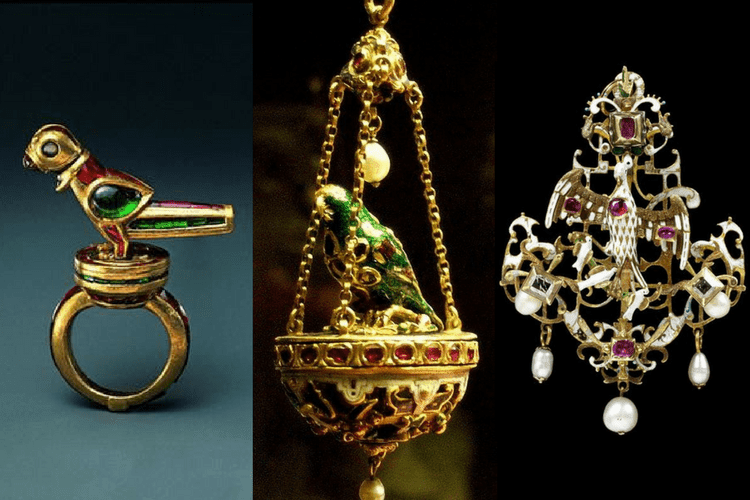 N.b. I am not a jewelry historian nor do I have extensive expertise in antique jewelry. Should you want to buy antique jewelry yourself, please do always consult an expert. There are several specialized galleries and dealers in the world. You can also go to shows like the TEFAF for example, and meet selected dealers who know everything about jewelry of certain periods! Should you desire a recommendation for such a gallery, please do drop me a line!